On an especially rainy Sunday, I couldn’t think of much better to do than hit a couple stores to go couponing, plus after my super successful Albertson’s trip, I was feeling confident. But I made a few fatal mistakes. First of all, Sunday afternoon is probably the worst time ever to go the store. Not only is everyone else in Portland out shopping, but the deals at Target/Walgreens etc just started, so the shelves have already been cleared (and not yet restocked) by crazy couponers. Then, to make matters worse, I made the mistake of bringing Jared. He not only hates couponing cause I make him print me coupons all the time, but he is so embarrassed by it that he would way rather pay full price than “make a scene.”

Those factors in place, I was determined to make the best of things. We started at Target, where I wanted to get 80lbs of cat litter for $23 and get a $5 gift card to use towards the rest of my purchases. Not surprisingly though, the shelf was bare. Not totally discouraged, we headed to the food section, where I found Classico sauce on sale for $1.83. It’s possible I got a bunch of $1/2 coupons on eBay for $1.75 (free shipping!) so I grabbed 4 jars. We also checked out the Morning Star farms selection because I had a $1/2 Target coupon, plus plenty of $1 off 1 manufacturers coupons. Even though they were full price, I still picked up two for $2.09 each.

Target unfortunately did not have everything we needed for dinner, so we headed to Fred Meyer next. While Jared combed the aisles for veggie gravy, I decided to casually walk around and look for deals. I found Olive Oil on sale for $4.99, which I happened to have a $1 coupon for, as well as a sale on Weber seasonings (2 for $5) that I had another $1 off of. Jared got an onion and au jus mix that were totally not on sale and we headed for the register. Since Jared paid the last time, I figured I’d be nice and get this one (plus in theory my items were more expensive) so I whipped out the Kellog’s $5 gift card I got for buying cereal. Even though it was alledgedly a “gas card” it worked fine and our out of pocket was under $3.

The veggie gravy mission, however, was a failure, so we had to hit Safeway to pick some up. It wasn’t on sale and it was kind of expensive, but that’s not why I mention this part of the trip. We wanted to get a salad to go with dinner, and I found some Fresh Express kits for $.98 (regular price.) I had a $.75 off coupon, which I used a doubler with, earning me $.27 on our salad. Now this may sound great, but the lady in front of us was buying BOGO chicken breasts and there was some issue with the label and it took forever. I may have gotten good deals but between the headaches and hassles, I’m still saying this was the worst shopping trip ever. 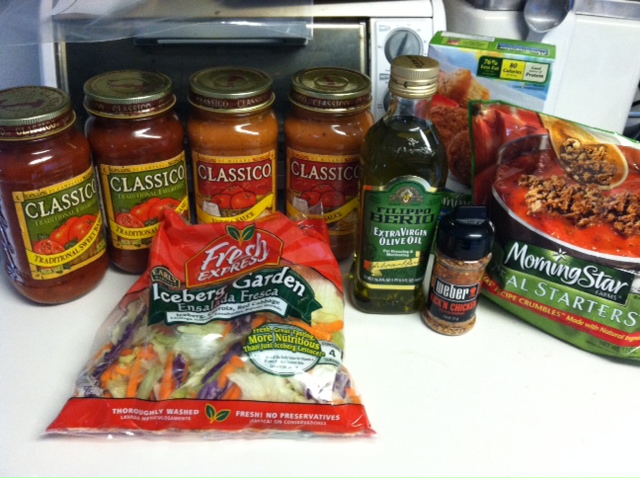 To recap my purchases and make myself feel better though:

(Technically the Fred Meyer trip cost $.49 because I used the $5 gift card)

Comments on "Worst Shopping Trip Ever"