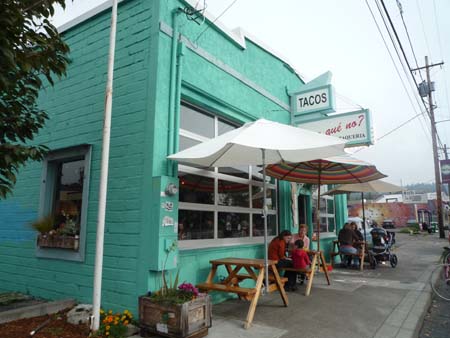 ¿Por Qué No? is one of those places that the hipsters in Portland will tell you is the most amazing place around. And why wouldn’t they, “why not” is the name of the restaurant after all. With two locations in the hip areas of Hawthorne and Mississippi, happy hour drinks, and seemingly cheap food, all served up in a casually-busy decor, Por Que No is a total hipster dream come true. Unfortunately, it’s not actually very good.

The food at ¿Por Qué No? is definitely not trying to be authentic Mexican (despite the over use of Spanish) but is more tex-mex style. Honestly, on previous visits I remember the food being a high point of my experience, (compared to the wait, the ambiance, the price, etc) but today I was not impressed with a single thing I ate. I ordered a horchata, which is “house made.” By definition horchata is a bit of a gritty beverage (basically cinnamon rice milk) but this was hands down the worst horchata I have ever had. It left me feeling like I attempted to swallow a glass of sand, but it was nicely garnished with fresh cinnamon! Oh yeah, and one glass costs $3, and there’s no booze in that ($3 more gets you rum.)

On to the food. We ordered chips and salsa (not free) which took a solid 5 minutes to make it to our table. The chips are thick-cut homemade tortilla chips and are probably the best thing to come out of the kitchen. That said, the cooking of them is fairly inconsistent and one bite will be too hard to bite through and the next totally chewy. I got two tacos, a pescado (cornmeal-crusted snapper, sour cream, cabbage, salsa, onion, cilantro and pineapple) and a basic carne asada. Now I am all for creative takes on basic food, which is why I ordered the pescado. And it while was the better of the two tacos, didn’t actually include any pineapple (maybe they they were out?), and just tasted like spicy cornmeal. The carne asada taco was just a bummer. Not tender, not flavorful, just a tortilla filled with chewy beef that left my hands covered in red salsa.

The vegetarian got a bean and rice bowl: beans, rice, sour cream, guacamole, “salsa fresca” and three tortillas. I asked him how it compared to other times he’s had the same thing to make sure I wasn’t just having an off day. “I’ve never thought that place was very good,” he replied.

As if sub par food was reason enough never to go to ¿Por Qué No? again, there is constantly a line stretching out the door, and even though they will take your drink order before you reach the counter to make you feel like you’re not waiting as long, it doesn’t actually speed things up any. And during prime lunch hours, you are forced to sit uncomfortably close to yuppies, as either the hipsters have figured out that paying $3 for a tiny taco you could get at Pepino’s for $.99 isn’t a good deal, or they only frequent this place at Happy Hour. But no matter when you go, it doesn’t change the fact that it just isn’t good.

Veggie options: as mediocre as the meat options

Speed: Hurry up and wait