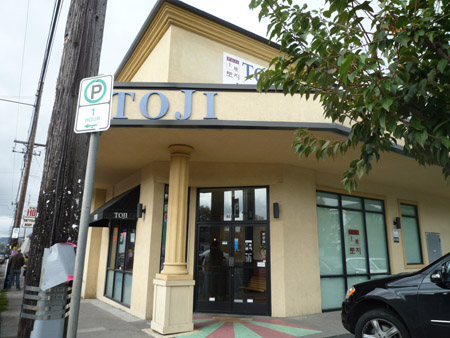 Toji is one of those places I’ve always wanted to go, but trying to drag a vegetarian to a restaurant where one of the main options is roasting raw meat on a grill in the middle of your table has proven difficult. But since this week has been designated for the 4600 block, it had to happen and today we hit up the Grill.

I guess I expected it to be expensive (it is designated with two dollar signs on Urbanspoon) and was pretty sure Jared would be forced to eat salad, so when I saw the lunch menu I was pleasantly surprised. I’m not trying to be racist here (or whatever the positive version of racism is), but damn, Asians “get” lunch. Like most Chinese and Thai places I’ve been to, the lunch options were complete meals for a very reasonable price.

I couldn’t resist the bento box, which came with your choice of meat (I got Chicken Katsu), salad, rice, pot stickers and noodles for under $8! I feel like Jared may have just ordered the bimbimbop for the sake of the blog, and I almost feel bad. It was one of the two vegetarian options on the lunch menu, but getting it without the typical ground beef and fried egg on top basically turned it into rice with veggies and tofu. Even though he was the one who ordered it with no flavor, he proceeded to complain that it was “bland.” Next time I’ll try the real version and be the actual judge.

My meal on the other hand, was awesome. Every individual element of it was really good. The salad was fresh lettuce, carrots and other veggies with a sweet sesame dressing. The chicken katsu was crispy on the outside and juicy on the inside, and cut into manageable strips even for me with chop sticks. Two potstickers and some noodles made it better than I even expected.

Not to mention, and our meal was served with a table full on miniature dishes of fermented goodies, which even though she described as she was placing them on the table, I’m not even going to pretend to know what they are. I was particularly fond though, of the kim chee cucumbers, one of three kim chee style options. Basically it was more food than we could eat, and cost less than $20. Not bad, not bad at all.

Veggie options: Tofu items yes, but limited and most include egg

Speed: respectable, but we didn’t order anything we grilled ourselves, which seems like it might slow things down.