Here I sit watching ABC’s The Bachelorette. Now I’ll admit I love terrible TV as much as the next person, but this show is a low, even for me. So why, do you ask, would I put myself through this show where the SAME GIRL from last season searches for love amongst douche bags once again? Well, I currently have two guests from Ohio, and they excitedly informed me someone from their past was one of the potential suitors on this season’s Bachelorette. 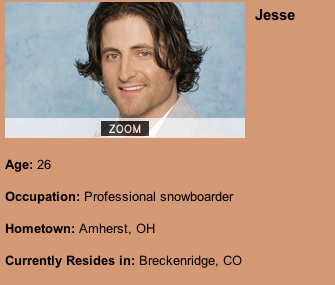 The Ohioan featured on the show is Jesse Csincsak and according to his bio, he is a professional snowboarder. I personally have never heard of Jesse, but my friends told me he’s huge on the Grand Prix circuit and similar competitions. I bet he is really big in Japan.

So for the entire episode (even the night scenes) Jesse had his sunglasses on his head. I think that really sums it up. He will probably get sent home soon, (actually I know he’s already at home because a call may  have been placed to him as soon as the two hour show concluded, but I think they probably film in advance), but no doubt he’ll show up on another reality show in no time. Yep, snowboarding has really made it!