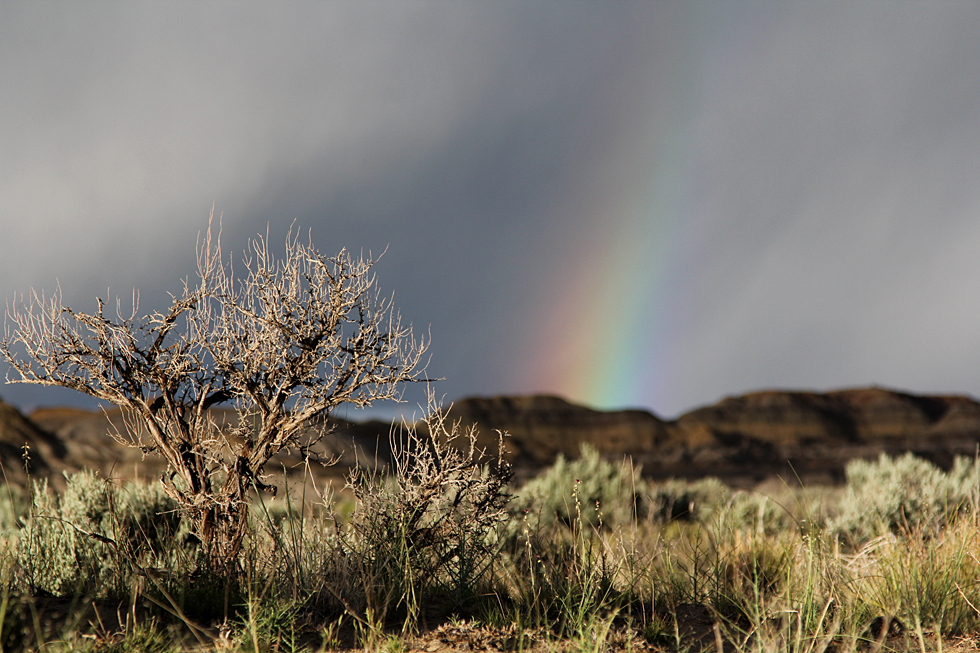 I was pretty much convinced Robbie Sell was going to kill me. Not because I am super annoying (I can be) but because after he picked me up at the Albuquerque airport, I realized what I had just gotten myself into. A three-day camping trip in the Southwest, going on treacherous adventures in the middle of nowhere, with only my own wits and a scrawny ex-pro snowboarder with bad knees to protect me. Things could definitely go poorly.

Robbie, incase you haven’t been following along for the past couple days, has been around the ‘ol snowboard industry for a minute. First as a pro rider in the Neoproto era, and then a photographer and most recently the Arnette Marketing Manager, who helped us put on things like the Crew Clash, and made it possible for me to (try to) force my employees to get tattoos at SIA. When he posted on Facebook offering to pick up any would-be travel companions along the way, I figured Living Vancariously with him for a few days would be fun. And like they say on the Internet, YOLO.

Robbie had been on the road for six months at this point, and more or less had it down to a science. In addition to the meticulous planning skills acquired as an adult babysitter for Arnette, he had technology. I shook off any fears of failure, resigned myself to his care and prepared myself for adventure. Our first stop: the Bisti Badlands of New Mexico. 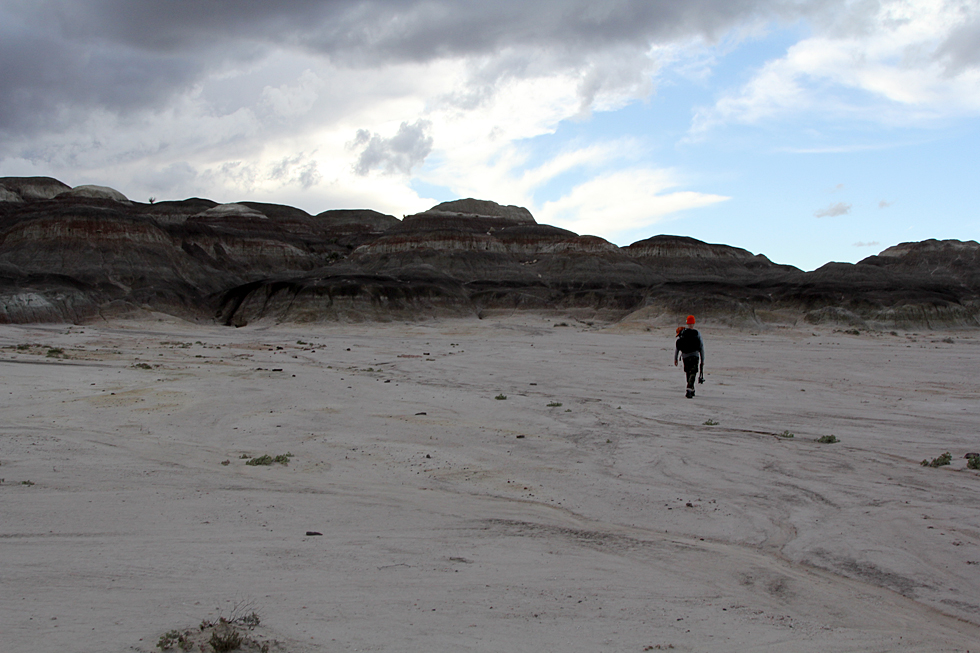 The Bisti Badlands are part of the BLM, which stands for Bureau of Land Management, basically public lands that are completely unsupervised and unpatrolled. You’re on your own out there. But lucky for me, I had Robbie, who’s professional plan included detailed directions copied off the Internet to his phone’s notepad, and even a topographical map, which he’d made me save to my phone too, just in case. We were happy to find there was even some cell service out in the middle of the desert.

I didn’t know exactly what we were looking for – the rolling sand dunes, rock formations and petrified wood all looked pretty photogenic to me – but Robbie had a vision. We came to the end of the well-worn trail and stopped to hatch a plan before wandering off into the wild. Dried up river beds twisted through a vast maze of hoodoos, different colored sand and rocks and even some formations that looked like wet concrete. The dunes were covered with tiny holes, and I was convinced a rattlesnake might pop out at any moment. But I was not in charge (and didn’t want to be), so I did my best to keep up as we trekked deeper and deeper into the Badlands.

“If anything happens to me,” Robbie said, “ just follow the power lines. They’ll eventually lead you somewhere.”

I look at the towers in the distance and laughed. “I just won’t lose you, ok?’ 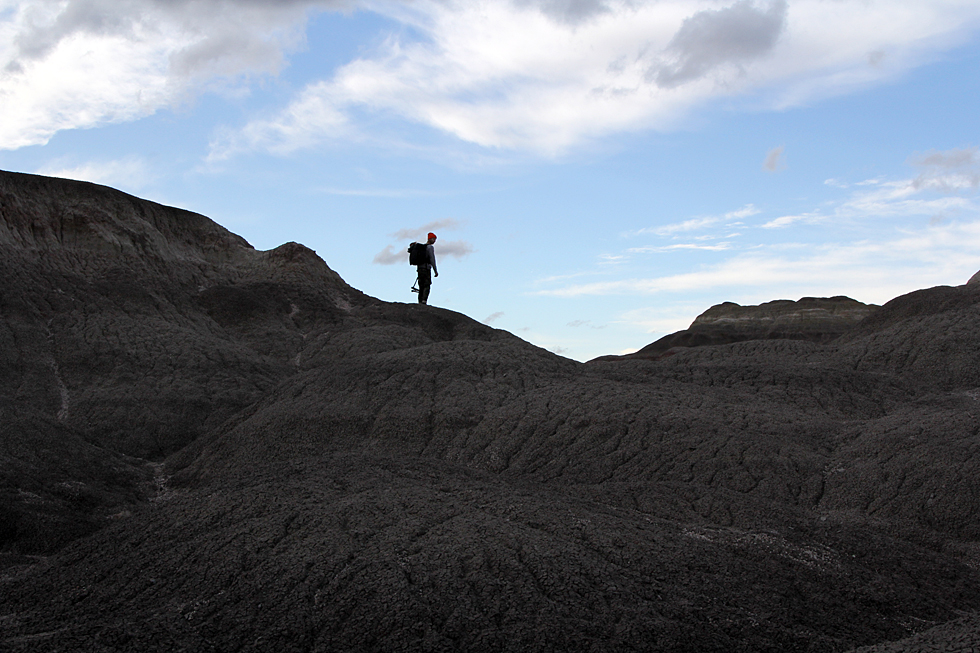 See anything? Maybe if we walk a little further…

After a solid hour of walking to the tops of highest peaks, only to discover more of the same, I was getting tired. I should have worn hiking boots not Adidas skate shoes, and why did I bring all this crap to weigh down my backpack? By this point I’d taken at least 50 photos, and had several snapchats pending, but Robbie was yet to take his camera out of his pack. I asked if he was ever going to take a picture.

“I will,” he said. “But I realized early in my trip that if I was too concerned about getting the shot, I would miss out on the experience, so if I don’t take any photos, whatever.”

We cracked some beers and kept on our search for whatever it was that Robbie deemed worthy of his digital pixels, but with the exception of a few small rock formations, found only more of the same. It was around 5 pm when we’d left the van in the small parking area at the Southside of the badlands, and now it was nearing 7. Off in the distance, the sky had blackened with ominous looking clouds and the occasional lightning bolt struck down. Though Robbie had still not taken out his camera, we decide it would be best to head back to the car. “Guess this is one of those places I’ll just have to remember,” he shrugged. 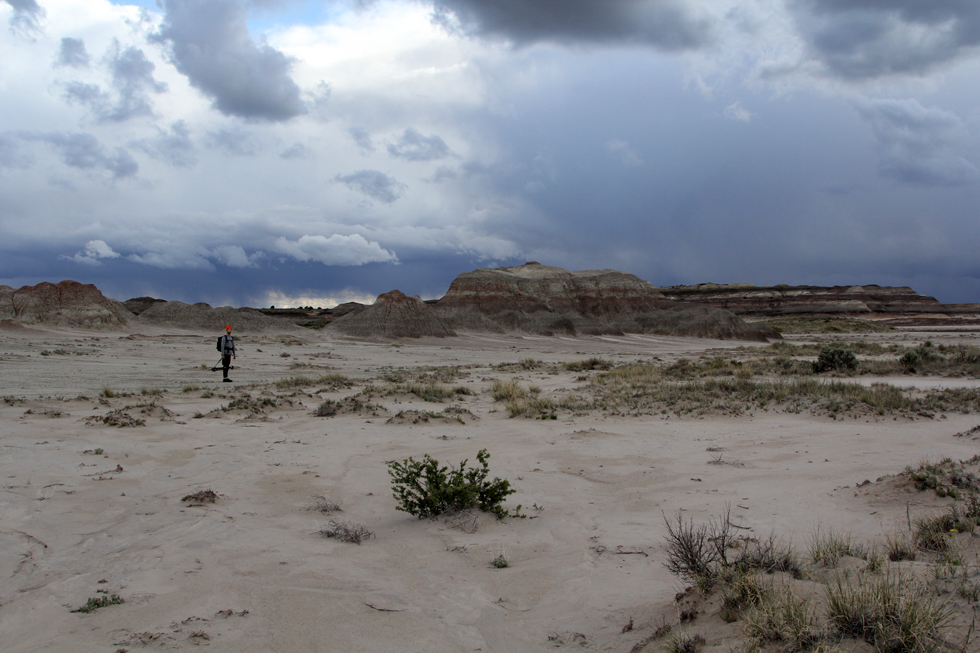 I don’t know, do those cloud look ominous to you?

While absolutely nothing looked liked anything we’d seen before (and yet everything looked pretty much the same) we were able to get enough service on our phones to get a general idea of the direction we were heading. The only problem – neither of us really had any idea what direction that was supposed to be. The clouds were moving quickly and we definitely didn’t want to get caught in a sudden downpour, so Robbie’s pace hastened. But before we knew it, the sounds of thunder were right on top of us as we traveled across open swaths of sand. Despite the impending darkness, we decided it may be best to wait out the storm next to something tall. We put on our jackets, opened another beer, and hunkered down.

The storm didn’t last long and in its wake left an epic full rainbow. Robbie finally got his camera out and we giggled like school kids capturing what was definitely the moment he’d been waiting for. Of course, due to excessive snapchatting, my phone had died (losing all the snaps in the process) but I made do with my DSLR. With photographic evidence of our adventure captured, and all the beer we’d brought gone, there was really only one thing to do. Get the hell back to the van, and quickly. The sun was starting to set and we were still in the middle of the desert. 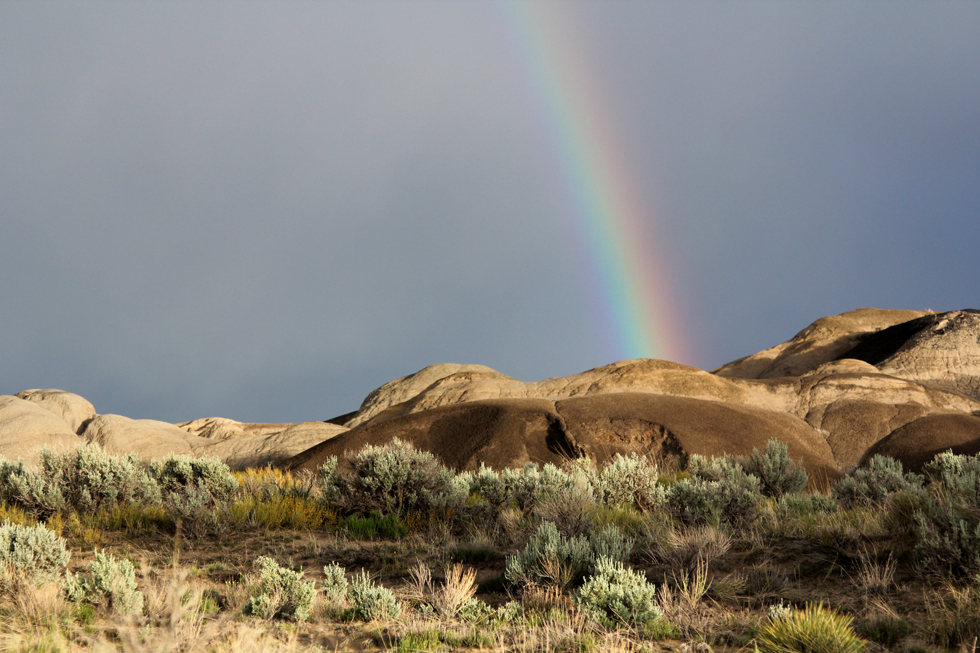 I think they call this a Kodak moment.

I could tell Robbie was getting worried as he walked quickly through uneven ground, cactus and sagebrush, leaving me hundreds of feet behind wheezing and attempting to will my legs to move faster. Every once in awhile he would disappear from view and my heart rate would hasten as I struggled to keep up. The New Mexico sand had turned to mud and was now caked all over my shoes, making each step even more arduous.

Every time Robbie would get to the top of a mound he’d pull out his phone and try and get a lay of the land, but AT&T service proved unreliable. Maybe if I hadn’t snapchatted so much and my phone was still alive, Verizon would have worked better. But I guess we’ll never know. 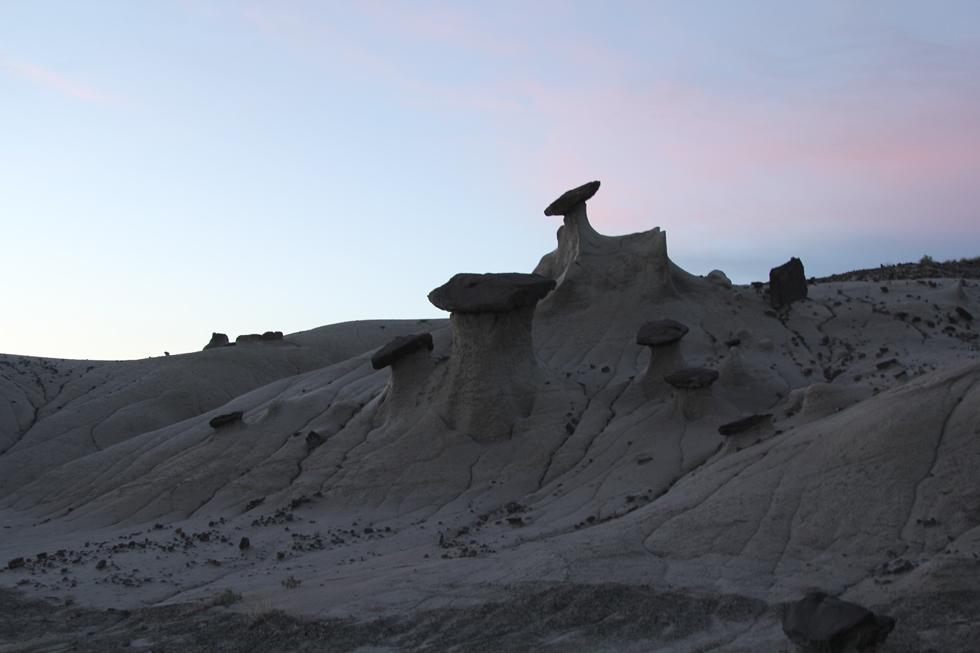 I think this is the stuff Robbie was looking for, so I stopped to take a photo even though I knew we were screwed.

As night fell and we were still trudging miserably through the Badlands, and things were not looking great. I tried to locate the power lines, but they seemed to be in a completely different direction, and very far away. Off in the distance though, we saw a light. Without knowing if it was a house, a methlab, or an oil rig, we figured we might as well walk to it – at least we’d be near some sort of civilization if we were spending the night in the desert. As we got closer the building – which turned out to be a cute little house – we could see a TV blaring, and hear a dog barking away.

“Of course they have a dog,” Robbie said.

Having already accepted the possibility that we were totally fucked, all we could do is hope that the inhabitants weren’t something out of Breaking Bad, and weren’t going to chase us away if we knocked on the door. Well I tried to assure myself it would be fine, Robbie was less optimistic. Wet and muddy we knocked and stood hopefully on the porch.

An old Native American woman came to the door and looked at us curiously.

“We’re lost,” we explained. “We were hiking, went the wrong way, and then it got dark.” 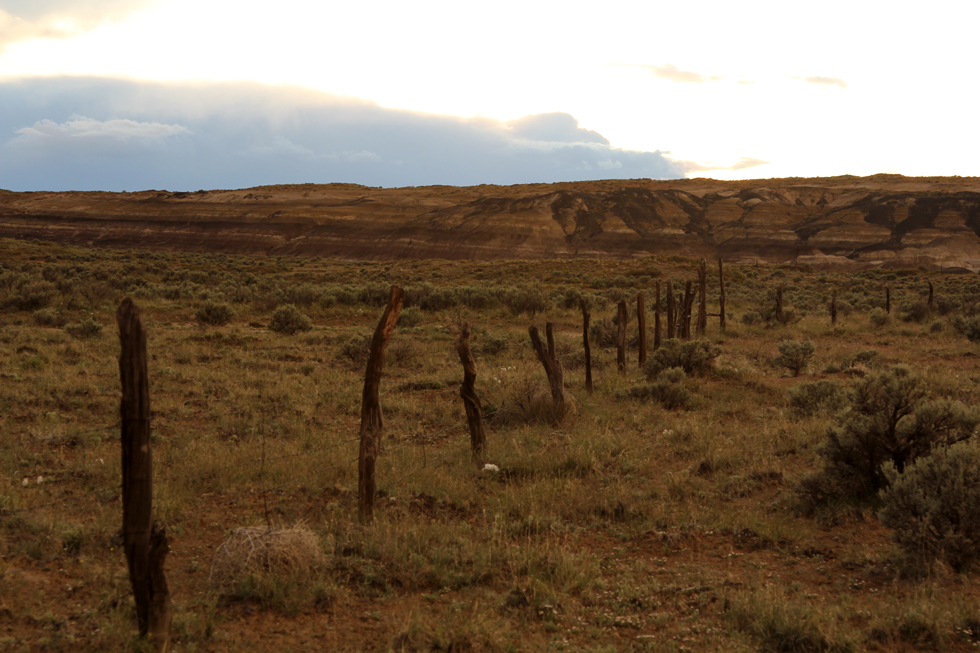 When you’re lost in the desert and you find any sign of man, it’s exciting. Not that this fence helped us in anyway.

I assume we weren’t the first idiots to find ourselves in this predicament as she shook her head, and opened the door, welcoming us in. Still reeling from the potential of a night in the cold, wet desert, being inside felt amazing, even if it was a stranger’s house in the middle of nowhere. We tried to explain where we wanted to be, and the women and her husband informed us that it was about 7 miles away. In other words, we’d walked in the completely wrong direction.

We stood there, awkwardly making conversation with the old couple, who were incredibly nice. The man was recovering from a total knee replacement, and a small child in a pink nightgown ran in circles around us. While I wasn’t about to walk seven miles back – even if it was on marked roads, but it seemed a bit presumptuous to ask for a ride. Luckily, their son-in-law, in his mid 20s, wearing superman pajama bottoms and a tapout hoodie, had come out of the other room and asked the old folks for directions of how to get us back to the van. Our savior!

Elijah turned out to be thankful for our foolishness – he was just in town helping his girlfriend’s parents while her dad was recovering from surgery and had actually been going a bit stir crazy, so he was excited for the excuse to get out of the house. Back at the van, we took off our soaked footwear and offered our new friend a beer. Everything had worked out fine – as it always seems to when you’re traveling – but man, that could have been really bad. 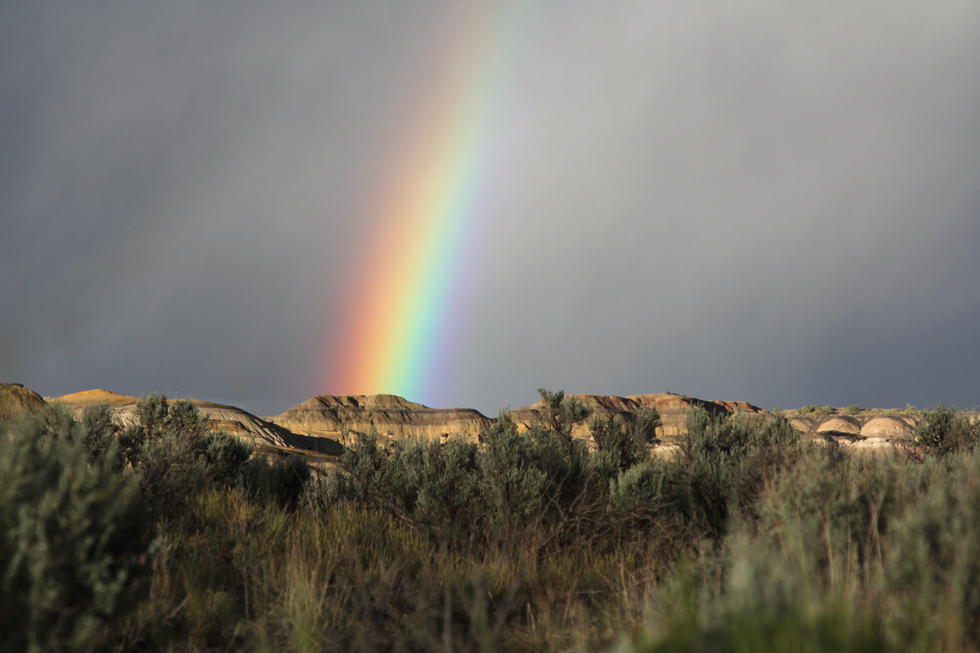 If you want to see the full rainbow, check out Robbie’s photo here.

Stay up to date on all Vancarious things at Livingvancariously.com