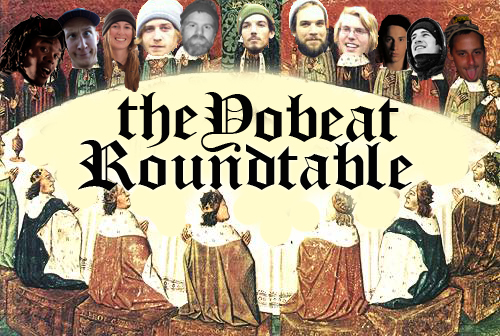 Welcome to the Yobeat Roundtable, a new feature where we pose pressing questions to the greatest minds and bodies in snowboarding in order to get some damn answers – or at least real opinions on the current state of Board World. For our first meeting, we’re discussing what it means to matter, or more specifically, stay a relevant snowboarder in this day and age of media overload. We asked:

The term relevance is thrown around more than ever in the Internet age, as just about anything can gain notoriety with enough social posts. As we approach the 2015/16 season, what does being relevant in snowboarding mean to you?

Ethan Morgan, Half German/half American Playboy/Bataleon pro: Being relevant is important to me as a snowboard pro.  Things have changed in Snowboarding, not good or bad, just different.  And if you wanna be a part of it, you just have to go with the flow.  Nowadays, you just wanna get your name out there so the world wide web can see you.  You could be the shit, have the best steez and heavy tricks, but if you’re not in that Social media mayhem program or not going to contests, you’ll get as close to just getting a shop sponsor.  Internet has it all connected, and has constant updates on what is happening in snowboarding and its different scenes.  So many snowboarding edits out there, it’s unreal.  It’s hard being relevant because there is so much Internet traffic.  So what * try to do is just be consistent with updates, bring out content and just try to get my name out there.

Sean Black, Muscular Man/Arbor Marketing MANager: What is defined as relevant depends on who you ask. Relevance is relative and with so many channels of communication available to so many people on both the publishing and consuming end of the media landscape, relevance is harder than ever to achieve or quantify. I think what I’m trying to say is that Erik Leon is super fucking relevant, and everyone else to rides an Arbor Snowboard for that matter. Yeah…all of them are the most relevant. Oh, Stan seems to be super relevant too. I heard, “OMG thats Stan from Yobeat” just as often as “OMG that’s Sage Kotsenburg” last week while on Mt Hood. Both dudes are super fucking awesome so that was nice to see.

Sean Genovese, Snowboard Visionary/Dinosaurs Will Die Co-founder: Hustle.  Has and always will be the most relevant.  If you’re making an effort and participating… people will notice.  If you’re half assing it… people won’t notice… therefore they won’t care… hence irrelevance.

Isn’t trying to be relevant consist of trying to be unique and as irrelevant as possible?  That’s my take on how people are trying to shift their direction towards being what’s currently relevant.

Jake Olson-Elm: Minnesota Hero/Signal Pro: I think Lucas Magoon is the most relevant snowboarder out there, then it just trickles down from there!!!

Matt Heneghan: DWD babysitter/Newfie.
I think the key to staying relevant is being in the know of what is currently trending in snowboarding but not totally catering your trick selection and riding style to that norm. Incorporating some new flavour is good but it is really obvious when someone is just straight up biting something. Do your own thing but evolve in a way that makes sense to your boarding.
Fredrik Perry: Fragile human/DWD Pro.
Being relevant for me I guess is if you’re out there doing stuff. I mean, if you’re in edits and doing interviews and put out videoparts, people know what you’re doing. You can’t really force it either, which is good, but I don’t think being relevant is a thing people really think about. Is it? At least for me, just film for a videopart I’m hyped for myself and that my friends will like and also maybe, just maybe once not get injured during a season. Yeah right. I guess it depends on what kind of snowboarding you do also. If you want to win big contests you’ll have to do some pretty crazy tricks and do those every other weekend during the winter to stay relevant, for other people it’s enough to drop one part a year, maybe even every other year. For some, just make silly edits for silly boys and girls. I like those.

Jeff Keenan, Whistler OG/DWD Co-founder: For myself and DWD, it’s all about submersing in to the culture no matter where you are at. From travels to resorts and spots in Japan and Europe, to roaming through the local scenes in North America; riding and bridging the the gaps allows you to keep check with similarities in all Snowboard culture plus you’re able to meet more people and expand your reach.

Jonathan Macdonald: Bear Local/Arbor Am.  Being relevant in snowboarding to me  is knowing what’s going on in the snowboarding community, but you don’t have to follow the footsteps that everyone else takes. Snowboarding was/is made to be fun and that’s the main rule u should always have, weather your doing a quad cork or the newest euro carve. You be the judge on what you think is cool and not, don’t just say it’s cool because your homies said it is or because it’s the heavy popular thing. SERIOUSLY BE YOUR OWN PERSON!!!

Brendon Hupp: Indie Filmmaker/Professional Pessimist
Filming a video part, photos (in print), maybe an interview (in print) and not over saturating the social scene with your shitty park edits and even worse product photos.

Kaitlyn Farrington: Olympic Halfpipe Snowboarding Gold Medalist. Funny that the question is about being relevant because right now that what I’m trying to figure out…how to stay relevant and let’s say not be the forgotten Olympian :/ I feel the internet has just made things a pain in the ass because I can’t just be me to the full extent without getting comments like “should you be doing that because your neck” or the call/text “you might wanna rethink your last post parents might not like that”  my response is “yes I am drinking out of a red cup I’m 25…”