Last night I blew off a skate mission to watch the Bachelorette finale. It was a good decision, because as it turns out, J-sak won! I don’t personally know Jesse, in fact, my first impression was that he was not doing the sport of snowboarding any service by claiming to be a pro snowboarder, but after watching the whole season, well, I got a little tear in my eye as he proposed and she accepted! So what better way to celebrate than by getting an exclusive interview, with his friend Nate. 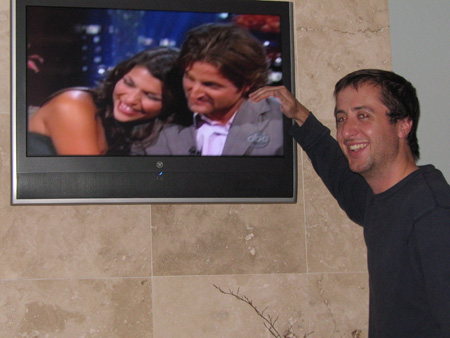 How do you know Jesse?
He’s a childhood friend of mine, originally from Ohio. We used to snowboard together.

Cool. So, how did you find out that Jesse was on the show?
I received a few text messages from a few friends who must watch tv and they said to turn on ABC at 8 on Mondays and then I was tuned it.

What did you think his chances were of winning it all?
At first I thought it was a joke. He didn’t seem like he was her style, but after awhile he turned the charm on and turned it around, which obviously shows.

Have you discussed with him how much money he’s making off this?
That I have not yet.

What was your favorite Jesse outfit over the show?
I have to say that any outfit he had the sunglasses and hat. Hat and sunglasses, which was actually all of them.

Are you invited to the wedding?
I have not heard back about that. I’ve asked, but I don’t know.

If you do get invited can I be your date?
There’s a good chance of that.

Do you think it will last?
I think it will. He is kind of a committed guy, when he goes for something he really commits to it.

Comments on "J-Sak, the exclusive interview"