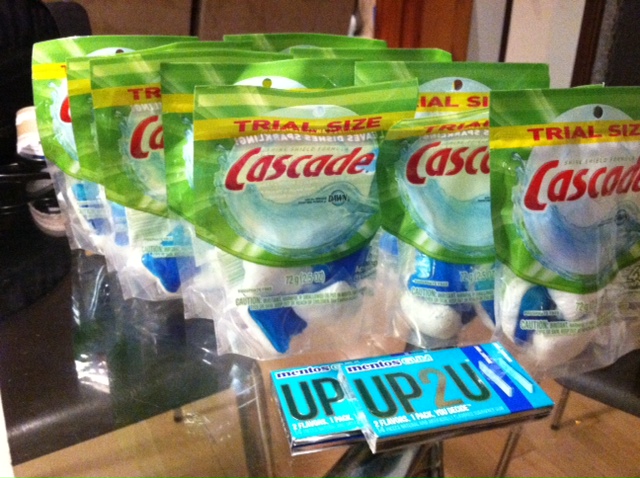 Yesterday was pretty much the perfect summer day. We floated, we ate pizza, and oh yeah, when we stopped at Target to buy whiffle ball stuff, I got all this with some change I had in the bottom of my purse.

I’d had the $1 off any coupons to pick up 10 Cascade items for a while now, but my goal was to purchase these trial-size action packs at Walmart, where they were not only under $1, but they will actually give you cash back if you have an overage. But after three trips and none in stock, I finally said screw it, I’ll pay 9 cents each at Target, where they were $1.09 each.

When he started ringing them up though, they were apparently on sale for $.97 cents each (same price as at Walmart) which means I had a $.30 cent overage to use. I grabbed a couple packs of Mentos gum, which I had a $1/2 coupon for in order to complete the transaction. For some reason though, it kept beeping “too many coupons” and wouldn’t even use the gum coupon. With my total at $.94 (and people now in line behind me) I decided to call it good. I used $.13 I had left on a giftcard and paid $.81 in change, which the high school boy at the register pointed out is not really like paying real money.