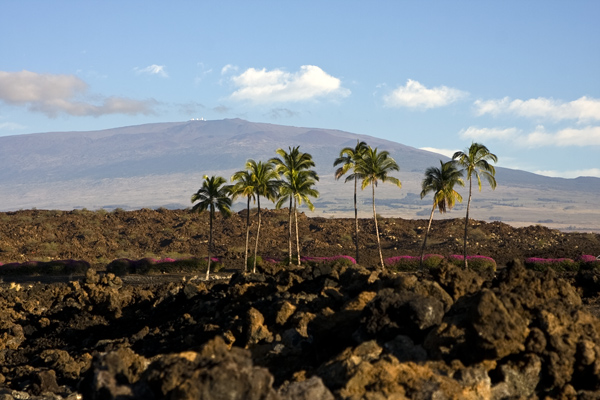 Never fear loyal Lunch on Hawthorne readers, we haven’t given up on our mission. No, Jared and I just went on vacation! Being the dedicated blogger I am, I obviously took photos of every meal I ate, and am taking this opportunity to post a some-what unrelated Hawaii food super post! Overall, our Hawaii food experience was a good one, although some of the meals fell a bit flat. I was surprised at the availability of Jared (veggie) Food; we only hit one place where he literally couldn’t eat anything. That’s not to say the overall meals weren’t meaty, in fact several places boasted menu items such as “Beef with Tofu” and of course, everything came with a big pile of white rice. Here’s the breakdown.

When we got into the Honolulu it was well after midnight, which worked out because we only had to pay for one night’s parking at the hotel. It limited our food options, but luckily Mac 24-7 was nearby, and the guy at the hotel suggested it saying it was featured on some Food Network show (I was sold.) It’s actually the restaurant for some upscale hotel, and accordingly was a bit pricey. But the food was really good, and the decor even better.

Our first breakfast of the trip was at Wailana coffee house. I picked it out off the Internet cause it sounded cheap, easy and fast, and it was at least two of the above. As it turned out, it may as well have been Denny’s and the food was incredibly underwhelming. They did have a coconut syrup for the waffles that Jared seemed to very much enjoy though.

Though I was very diligent about taking photos, I failed hard on writing down the names of the places we ate at. But I am pretty sure that the little Urban Spoon icon I found is indeed the place these photos were taken at, though not necessarily the right location (there are 6 of them.) It was your basic strip-mall Hawaiian place with a menu full of plate lunches. Pretty cheap, plenty fast, and the mini portion of Chicken Katsu was more than I could eat. Jared got a tofu stir fry, which just them having was a plus.

When I am on vacation I am slightly less cheap than in normal life, so even though I knew the spinning Top of Waikiki would be totally expensive, when it was recommended to us I figured, why not. Well, it certainly was expensive. Even the cheapest plates were over $20, but that’s cool. I was more bummed on the fact the food was mediocre at best. My shrimp carbonara had WAY too much rosemary, which totally overwhelmed the shrimp, and while Jared enjoyed the one veggie dish on the menu, it was more of an appetizer than an entree, even though it was decent sized. Really the only thing I got excited about eating here was the mango bread that came out before the meals, and of course, the view.

We made our way up to the Big Island for a couple days with a plan to drive all the way around it. Our first stop was Puka Puka Kitchen in Hilo. It was a little hole-in-the-wall place with printed-out email forwards under the glass on the 3 tables and a selection of sandwiches and plate lunches. I feel like it should have been awesome and I probably suffered from a poor job ordering, because my chicken curry was weird at best. It tasted like curry, but was more like a soup and the garlic rice it came with just confused me. Jared got a falafel, which definitely looked better. But I learned by lesson (sort of): When in Hawaii, order the damn plate lunch if they have it.

Around mid afternoon, thanks to my mediocre curry, we were getting hungry again, so we pulled off in some random down with a name that sounded like every other random town name to eat (it wasn’t the one listed, but hell if I know what it was and this was a chain.) We ended up at Blane’s Drive Inn (apparently almost all the places in Hawaii spell -in like that.) The food wasn’t amazing, but omg was it cheap. My ahi sandwich came about $4.50 with mac salad and Jared’s grilled cheese was under $3. Honestly for those prices, my only requirment is edible, and it certainly was, if not actually enjoyable in it simplicity.

We stayed in Kona for a day and a half, and on one mediocre lunch mission walked along the strip seeking out a place with both vegetarian food and fruity drinks. A very nice hostess told us about Rapanui Cafe, which wasn’t open for lunch, but we decided to head back there for dinner. The cuisine is actually New Zealand food, and they definitely had several vegetarian options (as well as meat) at a fair price (only beer for drinks though.) I couldn’t decide so I went with a combo. The macadamia shrimp was decent although light on the shrimp and I was envisioning crushed macadamias while they were actually whole. The beef sate though, was amazing. Super tender, and doused in delicious peanut sauce. It also came with rice and a cucumber salad, which was decent but a little bland. Jared complained that his came with an overwhelming amount of cucumber salad, but that’s what he gets for being a vegetarian, right?

I found U-Top-It thanks to my awesome google skills (I searched “best restaurants kona”). They only serve breakfast and lunch and luckily, we were in the market for breakfast. They have a broad menu, but I was most intrigued by the “pancrepes,” basically super thin pancakes, served either flat and topped or rolled with filling. As it turned out, there were pretty damn amazing and the coffee here was also really good. The bad news is they were ridiculously understaffed (one waitress for the whole place) so even though we got there well before the breakfast rush, it was slow to say the least. But definitely worth it.

92-8754 Hawaii Boulevard,
Ocean View, HI 96737
There are not a whole lot of culinary choices on the south side of Hawaii. We were heading south from Kona, and before we reached Volcano National park we decided to stop for lunch in the lovely town of Ocean View. Ocean View is basically a truck stop and two stores, so we chose to eat at The Lava Tube thanks to their lovely sign that suggested we “eat here.” It’s one of those places you’re sure is going to either give you food poisoning or be amazing. As it turned out, it was the latter. The beer batter on both the fish and chips and the onion rings was fricken amazing. The bad news: it wasn’t cheap (thanks mostly to Jared paying for a full order of $8 onion rings out of fear the side of beans would not be vegetarian and me getting lunch beer) and I got eaten up by mosquitoes while I was there.

Just outside Hilo we stopped for dinner, our final real meal on the Big Island. We ended up at a shopping complex that happened to have a Pizza Hut, where Jared really wanted to eat. I had to be persuasive to get him to go to Lemongrass instead, which was a Thai/Vietnamese/Chinese fusion type place and appearance-wise, very much something you’d expect at a strip mall. But the food was cheap and good, so that made up for the lack of ambiance. Only complaint: Jared’s “curry” was not actually curry at all, but he still said it tasted good. “Spicy, but not too spicy,” right Jared?

Back in Honolulu we opted for some good ol’ Mexican food on our final night. I again googled “best Mexican food Waikiki” and came up with this place. I made Jared sit outside, because it was damn warm and we enjoyed a few margaritas each. I was a little bummed it wasn’t happy hour, as they apparently have $2.50 margaritas then, but whatever, I paid $6.75 for my top-shelf blue marg and liked it. They had a few veggie burrito options, which made Jared happy, the chips literally came in a bucket and with this amazing pineapple habenero salsa, and mahi mahi makes a mean fish taco. Definitely a great final dinner for a great trip. But wait…there’s more!

Our flight wasn’t until the afternoon we we were finally able to make it Rainbow Drive In, a place that came highly recommended by everyone we talked to. Of course, Jared literally could not eat a single thing on the menu, so he got to sit and watch me enjoy my breakfast special: rice, eggs and pork cutlets with gravy. He informed me there was literally nothing healthy about what I was eating, but damn, it was good and what the hell, I was on vacation!