Seattle Goes all out for Think Thank’s Winter Social

Posted by admin in Features - (4 Comments)

With unseasonably warm and dry weather and stupid El Nino threatening another dry spell in the Northwest, the stoke for the season in Seattle is tepid. Thankfully, Jesse Burtner and the crew at Think Thank are not going to let a little thing like the weather forecast get em down  (cause seriously, when has the weatherman ever been right) and came up with the perfect solution in an otherwise hum-drum premiere season. Get everyone to dress up! While the “formal” designation of the first annual Winter Social was interpreted in many ways by the crowd, the verdict was overwhelming: getting all gussied up just makes watching snowboard movies that much better.

On October 22, 2015, the star-studded crowd donned a mix of 80s prom attire and button down shirts (it’s a snowboard formal after all) and gathered at Hale’s Palladium in Ballard to watch the Matt Cummins Documentary and Think Thank’s Methods of Predictions on the big screen. The movies were followed by a dance party, and the good times were punctuated by some Northwest-y beers on tap. It was the social event of the season, and even if it doesn’t snow this year, at least now we all know that these guys can clean up alright if they have to.

Tanner McCarty had a Tom Cruise thing going on, while Desiree Melancon kept it extra classy by drinking red wine.

Austen Sweetin was having a hard time fighting off all the babes due to his suspenders and flowing locks.

Bundy accessorized expertly, opting for a cane that not only made him look cool, but gave him something to lean on. Ryan Paul’s choice to wear a tie and a backwards cap was brave, but he totally pulled it off. And we’re pretty sure Riley Goodwin borrowed a tie from one of Johan’s kids.

Riley and Gary Read proved corduroy is not just for the ski slopes!

Why yes, I did wear a dress and you’re right, I do look great! Thanks for noticing.

Desiree’s floral print dress was perfectly accessorized with her feather earrings and blue hair and you’d be able to see it better if these guys didn’t get in the way of this picture.

Myles Soderstrom using an old fashion image capturing device to take a picture of me taking a picture.

Jake Hanson went with a classic “snow bro” look, while Max Warbington rocked the shit out of white pants and a vest.

Attendees were treated to a #zimstagram photo booth and the photos will be available somewhere on the Internet soon!

Brothers from the same mother Austin Hironaka and Jacob Krugmire kept it simple with all black and some stylish headwear.

And while there was a lot of competition for homecoming king and queen, Derrek Lever and Mary Rand showed up and crushed it all.

Now, pray for snow ya jerks.

This may come as a shock, but on October 9, 2010 the Downtown Throwdown in Seattle, WA, got rained on. Not only did it rain, but over the five or so hours of action in Occidental Park, it went from a light northwest-style drizzle, to pounding east coast-style down pour and back again, a couple times. Competitors stripped off their soaked sweatshirts when they got too heavy, and the crowd huddled in plastic bags, but seeing at it was pretty much an a fall day in Washington, no one really let a little inclement weather get in the way of a good time.

Personally, I came prepared with stylish rain boots purchased at K-mart on the drive up to Seattle. You may think this is an odd fact to share, but not only did rubber boots keep my feet dry and make the day that much more pleasant, but the only single thing I heard about more was Johnny Lazz’s back 3 5-0 front 180 out, stomped at least twice in one of the days final 20-minute jam sessions.

Between tricks like those, and the blood on his face from an earlier fall, Lazz was a shoo in for the Zumiez Destroyer award, which came with not only $1000, but the contents of the Destroyer box, which turned out to be a angle grinder and a wad of cash. When asked what he planned to do with his new found power tool collection, Lazz responding, “I’m probably gonna grind up some onions, tomatoes and cilantro and make some dank salsa.” He then let me know he was joking.

The Destroyer award was just a bonus though, and there were five more awards for superb shredding handed out. The field of judges, including Sean Genovese, Zac Marben and Pat Milbery were not faced with an easy task, doling out the $8000 purse, but being pros, they managed to figure it out, and $3000 for top honors will soon be deposited into the bank account of Ryan Paul.

RP has had quite a run from being 86’d from High Cascade to taking the snowboard world by storm, all in the span of a year, but seeing him ride in person, it all makes sense. The word “loose” doesn’t even describe it, and tricks such as a Front blunt 360 blunt to reg on the down box and a Switch 270 on down rail manage to look even more impressive than they sound.

“I had a lot of fun,” Ryan said “I didn’t know I would win – I didn’t even know if I would place. I get so nervous when they’re announcing the awards — and when it comes down to last moment they call your name, it’s amazing.”

The judges also recognized the consistency of the field’s largest competitor Ted Borland with fifth, Jake Kyzuk’s proper tricks and flawless style with fourth, Forrest Bailey’s rail mastery with 3rd and Scott Stevens general radicalness with 2nd. Despite having a broken arm, Scott definitely pleased the crowd with literal front handsprings over the barrel pile and of course, way better rail style than you could ever dream of.

The 5th Downtown Throwdown certainly did not disappoint, thanks to an always unique course from Snow Boy Productions, the vocal stylings of Jesse Burtner and tasty snacks from Cobra Dogs. Add in some amazing rail riding, and the rain didn’t even seen that bad. But of course, after the I.O.U.’s had been awarded and the final products from sponsors such as Lib Tech, Vans, and more, and the crowd and the riders were starting to dissipate, of course, the sun finally decided to come out.

After losing the soup off, and the Totino’s Party Pizza challenge, I figured it was time to let some other people do the cooking. I brushed up on my hosting skills by studying Padma for weeks (not really) before we headed to Seattle for this latest Top Chef installment. This time it was legendary pro snowboarder Peter Line competing against my former challenger, Party Time Nate, and the theme was hot dogs! Peter was kind enough to host in his insane Seattle pent house that sort of made me feel bad about my own home. Maybe I shouldn’t have given up on being a pro snowboarder after all… It was nothing but a good time, and you know what, the food was pretty damn good too. So enjoy the video, cause I’m not going to tell you who won.

Check out the full recipes and the making of gallery on YoBeat.

Story of My Life

I am supposed to be writing a story about the BMX finals at the LG Action Sports Tour, but the thumping alt rock beats of MXPX are sort of distracting me. So I figured I’d link to the two stories I’ve already written because I know you are dying to know about all the action in the Inline Vert finals and have no idea where to find out!

Day one Recap:  Halloween references, shake ups in the inline world and an attempt to make gansta rap sound interesting.

Inline Vert finals: At least someone new won so there was a somewhat interesting story to go with this one.

During all this I managed to get a snowboard story published too. Well ok, I wrote it awhile ago and it just went up. But check out my not-so-obvious video choices on snowboarder.com.

I am back in Seattle for the second weekend in a row, this time for a warmer, but much longer event, the LG Action Sports Championships. While in appearance this event is on the scale of a Dew Tour, it seems when I mention it to people the most common response is, “What’s that?” I’ve been here for two days, but the actual event doesn’t start for an hour. So far, the most action I’ve actually watched is a skateboarding bull dog shredding and slobbering on the street course this morning.

So far I’ve just been shooting some head shots and making famous people hold up YoBeat stickers for my own benefit. I got some big names such as Jamie Bestwick, Chris Gentry and most importantly Anthony Furlong. I also realized that through the wonders of WordPress I could upload them all and set them to go live once a week, which is going to revolutionize Nick’s job, on Mondays at least. 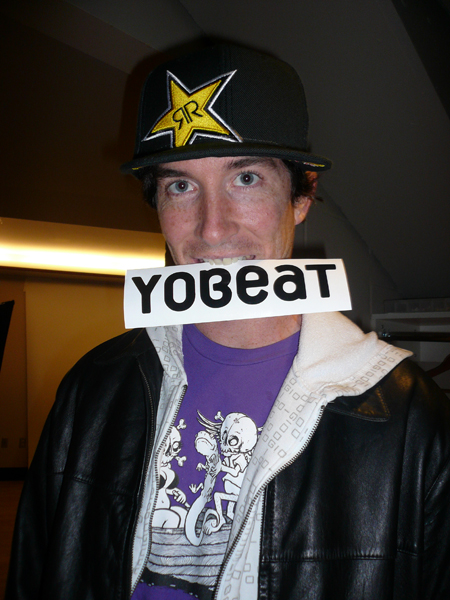 I would say the most notable thing about these events though, is the rollerblading division, which remarkably, still exists. You’d be amazed at how many people still rollerblade. It’s actually quite popular in foreign countries and since this is one of their biggest events, lots of people make the trek from afar. They also get sweet musical guests such as The Game, Pennywise and MXPX.  All in all, it’s sort of like traveling back in time. I’m even going to recycle my costume from last year in the case that we get done with the web stuff early enough to go out.

Between YoBeat, some print stuff, and the newly launched Snowboarder.com, I am feeling the pressure to come up with a lot of content right about now, especially since I want to keep alliancewakeskate.com going strong. But you know, it doesn’t say Extreme Journalist on my business card for nothing, so here’s the latest.

As I mentioned Snowboarder.com finally launched and I had one feature up there. It was originally going to be for YoBeat but Nick always gets screwed by people with budgets. Anyway, Nate helped me out a ton on this one, about the shipping process. Looks like I will be doing more regular stuff for that site as time goes on, so I guess I better come up with some more ideas.

Last weekend I headed up to Seattle for the Downtown Throwdown. I’m just gonna go ahead and say it, YoBeat crushed the contest coverage. First posted, best photos and a damn funny write up by Nick. I made Jared come up and shoot and he destroyed it as always. Of course I am the jerk who was working for someone else, because, well, I don’t like working for free. I made a little video for EXPN, which you can check out here. Another great chapter in the saga that is my involvement with ESPN.

This weekend I’m going back to Seattle for the LG Action Sports Championships. As if wake and snow weren’t enough, I guess I’ll write about BMX and Skate too. But it should be a fun weekend, and at least the event is inside so I won’t be cold.

Finally, here’s a picture of a neat church sign in Seattle for no reason other than I have it. 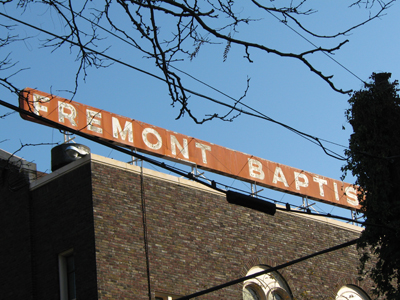