Posted by admin in Features - (9 Comments)

The view of Mt. Shuksun will never get old.

Brendan Gerard and I rode up Mt. Baker’s Chair 8 for the 10th or so time on November 19th, 2015, the warm sun on our faces and Mt. Shuksan gloriously looming in the background. The air was cold, but not too cold for Gerry’s “So Cal kit” – the only gear he had as he makes his way from NorCal back to Colorado for Thanksgiving – and the scenery can only be described as awe-inspiring. We began planning our next move – beers in the lodge followed by a stop at Nooksak Falls on our way back to Portland and we both agreed, it really doesn’t get much better than this.

It’s times like these when you have to wonder why everyone doesn’t want to snowboard (or ski, I guess.) Skateboarding doesn’t bring you into nature like this, and surfing is cool, but you can drown and you’re gonna get all sandy. Snowboarding though, is more than just sliding down the hill on a piece of wood – it’s a party with your friends set in some of the earth’s most majestic locales. It makes winter not only tolerable, but down right enjoyable, and it brings together friends from all over. As Gerry and I made our way closer to the top, we figured it out though. Many people just lack the motivation.

Snowboarding requires a love of the stuff, and it did take serious motivation to make it to Mt. Baker, WA for opening day all the way from Portland, OR. After several people jumped at the chance to go and then backed out one after another, the heavy snow turned to rain, and the stupid winter sun set at 4 pm, the trip was seemingly less and less realistic.  I was nodding off on the couch when Gerry and his girlfriend Lyndsie finally showed up around 7 pm on Wednesday night. Luckily they were motivated by a bottle of Bordeaux, and Mt. Baker was kind enough to hook up tickets, so we were really doing it. We were only about an hour into Washington when I realized I forgot my boots (idiot!) but Gerry just shrugged, “you always forget something,” he said. And he was right, there was no turning back now.

We arrived at Baker at the crack of 9:30 – with only a trace of new on the report, the aggro-powder-fever was non existent and I was able to rent remarkably comfortable boots for a mere $18. I used my former-local knowledge to send it to Chair 8 first, where the best terrain and most airtime potential of the day was waiting for us. The snow was soft, the sun was warm and the stoke level was high as we lapped the natural terrain that makes Baker so legendary. From the chairlift the likes of Austen Sweetin, Blair Habenitch, Austin Hironaka, Jacob Krugmire,Dave Marx, Josh Poehlein, Sean Lucey, Pat McCarthy, Nick Ennen, Coonman and more could be seen sending it with little regard for personal safety or the thin layer of crust over the freshies. The Johnny Utah pale ale (the strongest on tap) went down mighty easily as everyone gathered in the afternoon sun in front of the White Salmon lodge.

Mt Baker opening day 2015 can only be described as a smash success. There’s still some thin cover, and it’ll take another couple feet for the mountain to be fully operational, but after last year’s buzzkill of a season it was the perfect reminder of just how good snowboarding can be. Thanks Mt. Baker, we’ll see you again soon!

The view of the moon from the top of Chair 8.

Gerry entertains the riders of Chair 8.

Good thing it was sunny or Gerry may have looked a little silly in his jean jacket!

The bomb hole/tree in this landing may have scared a lesser man.

But Gerry rode it out, and I actually kind of like the landing shot better than the air time. I wonder if Getty is hiring.

Pat McCarthy gets the shot of Blair Habenitch.

Austen Sweetin gets a little too close for comfort.

It wasn’t a powder day, per se, but there were slashes to be had. Austen Sweetin.

Sean Lucey puts down the camera to negotiate the gnarly inbounds slide!

And Nooksack Falls, cause nature sure is pretty.

I have a lot to be thankful for. Somehow, a little website my friend and I started as a joke now more or less pays my bills and gives me a creative outlet to do just about anything I want. I can get any equipment I can imagine, for free, and one of my biggest problems in life is that I want to go to the Burton European Open and the Mt Baker Banked Slalom, but I can’t, because they’re on the same weekend. But if we’re being 100% honest about what I’m really thankful for, it’s snowboarding itself, and days like Mt Hood Meadows opening day this year.

The fact that it fell on Thanksgiving just makes it that much easier to appreciate. We all draw out our half assed thankful ness on Turkey day because we think that’s what we’re supposed to do, I guess. But for me, it’s good to have a forced holiday that tells me to sit back, relax and actually think about how much good shit is going on around me. Thanksgiving is by far my favorite. No gifts, no guilt, just a day that says, have a blast and take two seconds to appreciate it. With my brain moving 400 mph all the time, I need that sanctioned day.

Anyway, about Meadows. It was one of those days that makes you forget what riding in the Northwest is really like (read: wet ass snow and no visibility). One of those days where everything comes together. Good snow. Clear skies. Incredible views. Good friends. Holy shit, it was awesome. 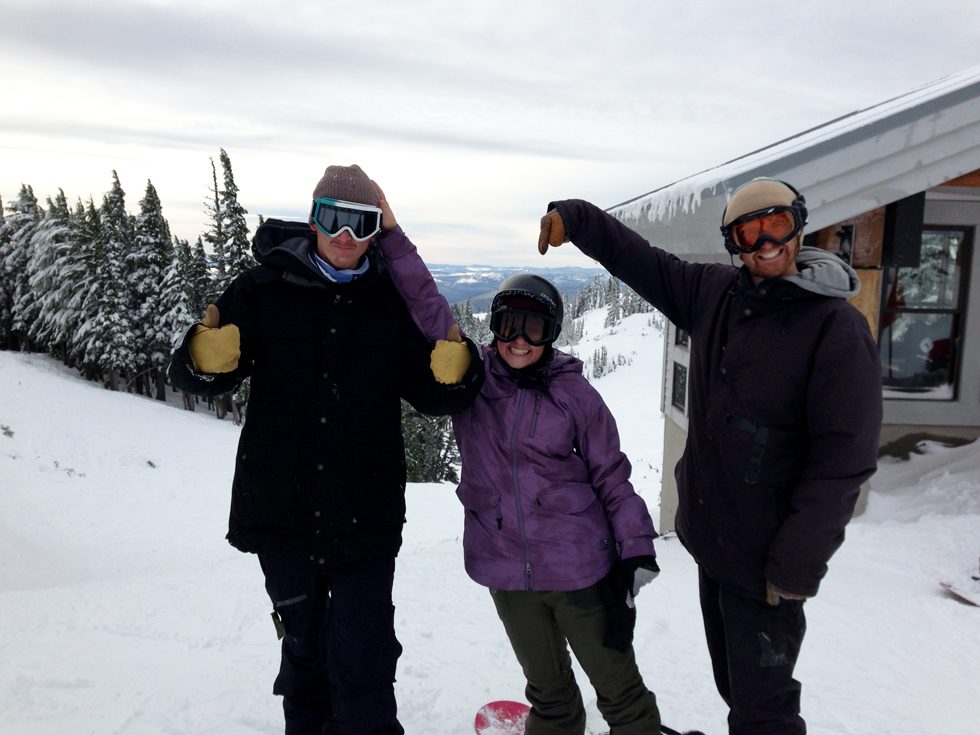 Here at Yobeat, Thanksgiving is BY FAR our favorite holiday. The one day a year you get to TOTALLY ignore the fact that gluttony is a “deadly sin” and just indulge. And in addition to good food, it’s also the ultimate day to go snowboarding. Especially when it’s as good as Mt Hood Meadows was on November 22nd, 2012. Because any other day you might start to feel a little bit guilty.

So let’s just put this out there. It was a powder day, and not a Cascade Concrete powder day but a legitimate pow day. It was also clear, so you could see how rad you looked slashing that light-for-the-Northwest snow all over the place. All the Joeys stayed home to cook turkeys and the lines at both Mt Hood Express and the pass office in the morning moved just quick enough to give you the break you needed. Every lift ride you’d run into another crew of friends. Basically, it was perfect. So if you missed it, you blew it, but not really, because there are plenty more days to come… just remember to be thankful for all of them.

Check out the official video here.

Last year, Timbro had his worst first day of snowboarding of the year, ever. He wrote all about it, so you can get up to speed. This year, Meadows’s opening day came much earlier than last, and unlike last year, Timbro was there. Since this opening day thing is officially getting old (and yes, we know it’s still early November) we’ll let this mini-documentary do the talking. This is what you missed in Oregon on 11/11, but don’t worry, there’s plenty more to be had!