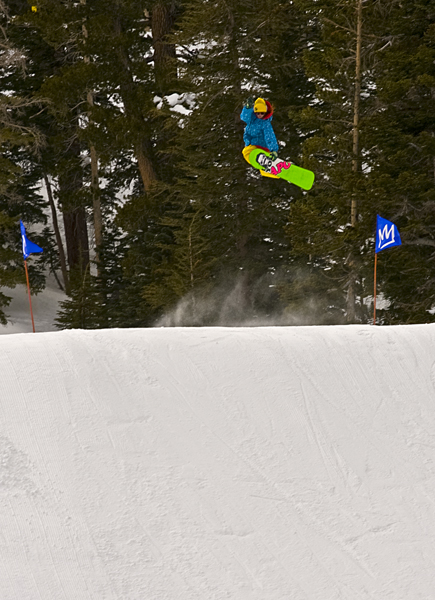 I just said I wasn’t writing any more about this event, so if you are really interested, you can read one of the three stories I already wrote. One on YoBeat, one on Snowboarder.com and the press release which should be popping up as soon as Kelly sends it out.

I was set to stay thru Tuesday but crappy weather and general laziness prompted me to change my ticket for tonight. Now I am sitting in Reno poaching the internet (thanks Robbie!) and waiting to head home. Good times all around. 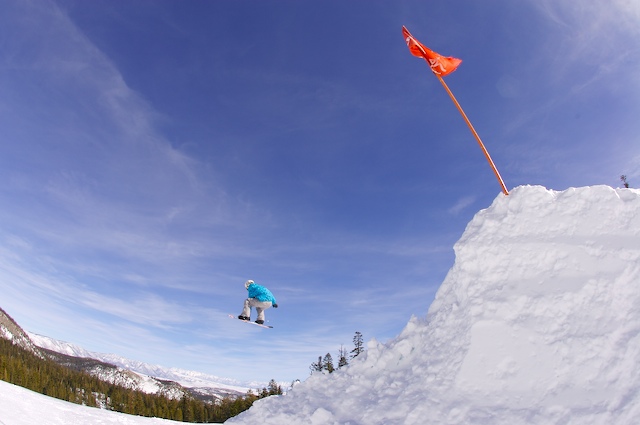 John Webster photo. I will miss you this year worst enemy. Boo for real jobs.

I am all packed up and waiting for my airport shuttle (thanks Nate!) so I can head down to Mammoth for the Nikita Chickita this weekend. I am a little bummed I am missing the Holy Oly, but Nick has assembled a crew of two photographers, a filmer and himself, so I think it’s covered! Hopefully they don’t get in each other’s shots. And if Chikita is anything like last year, it will be a good time as well.

This year I was less involved with the planning of Chickita, but I still helped with registration and will be journalizing like mad when I am there. Fingers crossed that it’s sunny and wonderful as Mammoth should be so I don’t have to “try” in order to get the shot.

I am also meeting up with the Osiris girls crew while I am down there to maybe shoot some stuff for them. I keep telling these people I am not a real snowboard photographer, but no one seems to listen! It’s fun anyway, and hopefully I get some good stuff. I’ve got a ridiculous amount of stuff packed (yay snowboard photography!) and I sure am glad I have airline status. Even if does mean a 3 hour layover in SF to get to Reno (which is equally far away from Mammoth as SF.)

In this age of drug tests, energy drink sponsors and snowboard moms, contests have become the antithesis of why most of us started snowboarding. But there are a few events out there that don’t fit the usual mold, and strive to keep things mellow and fun. You don’t even have to be the best rider to enter. These are the Anti Contests.

Photos: Timzimmerman.com
Tom Sims didn’t set out to respond to other contests, or remind people what snowboarding should be when he and Bob Barci approached Mt. Baker about the idea of holding a slalom event in 1985. Back then, many of the 14 competitors who turned out weren’t even riding real snowboard gear. But more than twenty years later, the Legendary Banked Slalom has remained true to its roots, and stands as the original “anti-contest,” an event that isn’t so much about winning, as it is about snowboarding, seeing old friends and making new ones. There is no money, just painted rolls of duct tape for the winners. Yet the LBS attracts everyone from top pros of the day, looking for a reprieve from the hectic contest circuit, to legends like Terje Haakonseen and Temple Cummins, who usually don’t compete at all. “It’s young kids, old rippers, and the best riders in the world all riding the same course,”Cummins said. “The actual race time is only a few minutes of the day, the rest of the day is for riding with all the friends.”

Check out more images from the 2008 LBS

The Holy Oly Revival is officially “A Celebration of NW Snowboard Pride.” The recipe is simple: build the biggest quarterpipe in Washington, and let anyone who wants to ride it go nuts. At the end of the day, someone walks away with a pallet of Olympia beer.  “The event just has a start and a finish…there are no heats, no categories and no rules,” event founder Krush Kuleza said. The “Holiest of the Holy” award has gone to Peter Line, Justin Heath, Luke Mathison, Sammy Luebke and Wille Yli-Louma over the years, but there are also awards for the Best NW Method, Hardest Charging Industry Hero, The Berserker Award and The Future of NW Shred. Every year the quarterpipe has gotten bigger and the course better, but the vibe has stayed the same. This year, a natural disaster is moving the action to Summit West, but don’t worry, that’s all that will change. “I’m stoked when I watch local 12-year-old Jacob Krugmire drop in after two-time Olympian Danny Kass while Sean Genovese and Pat Milbery session some jibs. Burtner keeps the crowd entertained, Grove keeps them fed and Peter Line’s girlfriend’s iPod playlist pisses off some soccer dad…it’s quite a scene to behold,” Kuleza said.

Check out all of the action from 2008

And some more photos.

Sorry boys, you have to have boobs to compete in this event. Actually, technically you don’t because it’s open to riders of all ages, and 8-year -old girls have been known to compete against women in their 50s. There are tons of prizes (Lomography has even signed on to sponsor the event this season), some cash for the pros, and first prize in the Am division is a one-year Nikita sponsorship. But even with said prizes on the line, the Nikita Chickita feels more like a mellow day riding with your friends than a contest. The format seems to be made up as it goes along, and if the judges can’t decide, they just let the girls ride. Whether you hit up the event in Austria or the one in Mammoth, when all is said and done, it’s pretty easy to forget you spent all day at a contest, and that’s just the way they want it.

Want more images from the Nikita Chickita at Mammoth 2008? Here ya go!

Nate Chute was a big part the snowboard scene in Flathead Valley, MT until he took his own life 10 years ago. So his parents, friends, and Joe Tabor, owner of the local shop, Stumptown Snowboards, set out to start and event in his honor. The Nate Chute Hawaiian Classic was born. “Nate was one of the kindest, most talented kids on the mountain,” friend and K2 Team Manager Kevin Winkel said. “He was the kind that let his riding speak for himself and when he did speak it was only positive things to be said.” The idea for the event was to create a time and place for old friends to gather, ride together and remember Nate. But since there are many variables in a freestyle event, the main event has always been a banked slalom. “It was something anyone could participate and have fun,” Winkel said.  “We have ex-Olympians participating, little groms, moms, grandparents, ex pros and all in between.” A few years back a Chinese downhill was added and after ten years the event has become something who grew up riding Whitefish won’t miss. “There is nothing better than getting to shred your home mountain with all of your friends that you grew up with,” Winkel said. “Everyone else that was not part of this history can easily feel the vibe and is welcomed.”

Thanks stumptownphoto.com for these pictures!

Photos courtesy Rome Snowboards/Liv2ride
In the late 1990s, the US Open was transitioning from the year’s biggest party, to a serious event with national television coverage and relentless bag checks, so the World Quarterpipe Championships began as an answer to that. Originally called the East Coast Quarterpipe Championships, and moving around New England as it wore out its welcome at various resorts, things have only gotten rowdier over the years, but it has always been about 50% drinking and 50% snowboarding. This season the rebirth of the WQP at Timber Ridge, a private ski area in Vermont, included a mid-course fire pit, a bottle of Jack handed to riders after they hit the quaterpipe, and the “gauntlet”—a row of hecklers who yell and pelt the rider with their empties. “From the outset it was designed as the anti-contest,” WQP founder Mark Sullivan said. “A lot of riders jump through the same contest hoops all season long and this was designed to be 180 degrees away from that. What all big events did, we did the opposite.”

We dug up some pictures from World Quarters of yore and a few more of the event at Timber Ridge. Here.

Photos courtesy Grenade Gloves/Jeff Curley
Leave it to the Grenerds to come up with an event held each year on 4/20, complete with snowboarding, metal and of course an award for the “highest” air. The event, whichhas been held at June Mountain and the Summit at Snoqualmie over the years, includes awards for everything from riding mogul fields binding-less, bull riding, racing, over consuming, spinning like crazy, blasting massive airs in the pipe, and all-around great riding. “With the vast season of so-so events we need events like this to remind people why we snowboard and why we like to compete amongst each other on snowboards — to meet chicks,”  Danny Kass said. Word has it the Grenade Games will go down on Canadian soil in 2009, so watch out.

Oh yeah and here are more pictures. Thanks to Grenade and Jeff Curley!