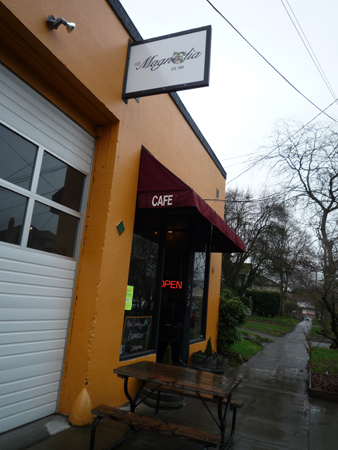 We’re really winding down this project — basically the places left to go are either not really on Hawthorne, or just plain scary. Magnolia fell into the former category with it’s slightly off-the-beaten-path location on 32nd. We were actually trying to go to Chance of Rain cafe, the former occupant, but it’s gone, Magnolia is open and there we were.

I gathered this was more of a breakfast spot, the waitress was sure to let us know they served it all day, although the menu options were not very extensive for either meal. I was feeling lunchy, so I went with a BLT. Actually, I realize this has become my normal Wednesday meal, as we often hit up Hungry Tiger on hump day, and that’s what I always end up getting (even though they have $1 corn dogs.) Not sure what that says about me, guess I am getting old and boring.

Anyway, the menu reads very gourmet, so when my sandwich showed up on what appeared to be cheap toasted white bread, I wasn’t particularly excited. Luckily, the bacon was really, really good– perfectly thick and crispy — and instead of lettuce it was served with spinach (BST?), which was also a nice touch. The house chips were a definitely highlight, I can’t think of another place in Portland that makes their own that are so thin and yummy. Oh and the pickle was legitimately spicy, as promised on the menu. It was an overall decent lunch, until I realized it cost $7.50. Not trying to be cheap, but at Hungry Tiger I get the half- order (more than enough for me) and it’s under $5 (and it has avocado on it!)

Jared got a veggie burger, which may have been the only true veggie option on the menu, and since he won’t ever tell me what he thinks, I will go off looks. The bun and burger patty seemed mismatched. The burger was thick for a veggie patty, but the bun was even thicker, almost bloated. Maybe it was soft and delicious, but it looked a bit odd. The sides were the same so refer to my review above for those.

I wasn’t entire upset up the offerings at Magnolia, the food was very ok, and I’d bet it would be a good choice for line-free weekend brunch. Overall, it seemed a bit to0 unnecessarily gourmet. Instead of offering fancy food, a better plan would just be offering good food, but maybe that’s just me.

Speed: It was empty and the service was good, accordingly. 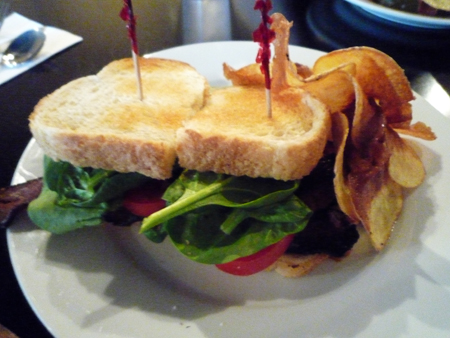 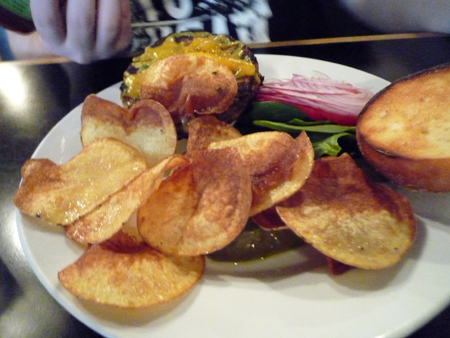