In the Wild with Danyale Patterson: Early Season Rituals at Boreal

Posted by admin in Videos - (13 Comments)

Dangy visits Boreal Mountain in sunny California, where snowboarders are rejoicing with the beginning of a new season. In this episode of In the Wild, she explores their early-season rituals and the challenges brought on by months away.

boreal, danyale patterson, in the wild

Not bad for June snowboarding in Tahoe.

Creating a summer snowboarding set up without a glacier is an accomplishment, to say the least. So building a 22′ Superpipe, without a glacier, on a year that snow kinda forgot to fall is something that pretty much requires an entity like Woodward to make possible. Add in a private jet full of skate heavy hitters (like Tony Hawk!) and you have a grand opening celebration like the one that happened at Woodward Tahoe on June 9, 2012.

The latest edition to the Woodward family at Boreal is now open, and the general public (as well as pros, media and other highly important VIPs) got to check out the snow, skate and bouncing facilities. A mere 10 hour drive away, we decided to take a road trip, mostly because we heard Tony Hawk was gonna be there. Also, because flying with snowboard gear is pretty much the worst these days.

Air bag: check. The view from the top.

After a glorious night in Reno, we drove the final half hour up to Boreal and there it was: the deepest white ribbon of death I’ve ever seen. Though there was danger of toppling off the edge to the grass below, the set up was actually pretty decent, albeit a bit quick from top to bottom. In addition to the “top pros” like Chaz Guldemond and Zak Hale, a large contention of Tahoe shreds who opted against the summer in Hood to “make some money” this summer were out in force. Ironically, the best session probably went down in said Superpipe, where soul carving was more important than if you had a wrist band.

This is what happens when hipsters get in a halfpipe. Eric Messier.

When the lifts closed at 2 it was time for skate and cheerleading demos. Although we were SUPER EXCITED about the Cheerleading, we didn’t bother to take photos, so you’ll have to take our word for it. And as you’d expect when a private jet is involved, the skateboarding was insane. Inside the bunker, a concrete set up destroyed by dudes such as Brian Hansen, Jaws, Tom Scharr and Curran Caples. That was followed by a session at the mini ramp where Tony Hawk and Todd Richards showed they’ve still got it and Mike Vallely proved he’s really fucking good.

So there you have it: another option for summer snowboarding. Also, if you’re driving there from Portland, you can stop at Crater Lake. And that shit was awesome.

Now for lots of pictures by Jared Souney!

Posted by admin in Snow - (0 Comments) 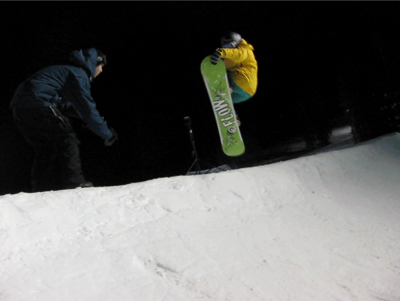 I was able to negotiate with my hostage takers to leave Tahoe today, but it wasn’t without a little suffering. After two days of temperatures too warm for jackets, we went up to Boreal for night riding. Not only was it night time, but the weather patterns had changed and the temperature had dropped dramatically. In short, it was freezing. I braved the cold (and held my camera in my armpit between shots) to make a little video. Check it out.

Now I am just waiting for my snowboard to show up (I think it ended up at the other house) so that I can make the trek to Reno and fly home. Logically I am going through SF and have a 45 minute connection, so cross your fingers for me! Can’t wait to get home.