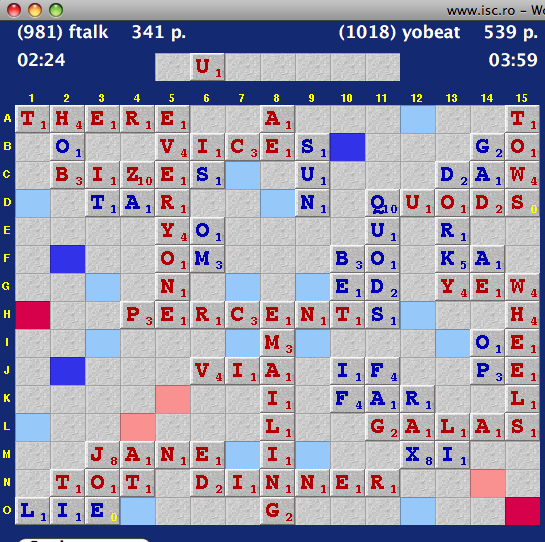 I’ve been threatening to write this one for awhile now, mostly amidst gloating over annihilating a Scrabble opponent. It usually goes something like this:

Random person I know or have just met, “Oh, I love Scrabble, we should play.”

Me, “Yeah, you probably don’t want to play against me.”

Fast forward to an hour later, most of which I’ve sat there twiddling my thumbs and/or tapping my fingers on the table while they labor over each move, then hastily slapping down a word worth three times as much as their average play. Final score: Me: high 300s. Them: mid 200s.

This story has unfolded more times than I can count, so many in fact, that I’ve found myself letting people win the first round just so they’ll play me again. Because more than anything I really like playing Scrabble, making cool words and figuring out how to get 96 points with a few letters. But in the interest of full disclosure, in the grand scheme of “good” Scrabble players, I am average at best. Sure, I can crush pretty much anyone I know in a face-to-face game, but I spend a solid portion of each day playing online Scrabble with fellow nerds and have about a 50 percent victory rating. So take the tips I am about to share for what they are: suggestions of how to improve your game play, and not sure fire ways to win. There is a lot of luck in any game of Scrabble, but with a little bit of strategy, you can definitely point that luck in your favor.

1. Know the two and three letter words. There are so many dumb combinations of letters that should not be acceptable, but they are! AA, AE, OI, HM, SH etc, etc. If you know a lot of them, you’ll find placing real words is a whole lot easier. Of course, people will whine and the board will get completely ruined if you play these dumb little words exclusively, so I mostly try to use them to build off of and make better words. Here’s a full list of acceptable words, if you are so inspired.

2. Play for bingos. A bingo is when you use all seven of your letters, and it gets a 50 point bonus. They are not actually as difficult to get as one would imagine, in fact, I find they are harder to play, than to build, as you need some serious real estate on the board to get one down. But the trick to getting bingos is to be strategic about which letters you play, and which you hold on your board. For example, if you have IES, of ING, those letters will make it a lot easier to create a bingo. However, the number of words with V, K, J, etc in them is a lot less, so if you draw those letters, try to play them as soon as possible to up your chances of being able to play all your tiles at once.

3. Know how to look at your tiles. I can look at a rack and see lots of words most people would probably miss. This is a lot because of how my brain works and the ridiculous amount of time I spend playing Scrabble. But to increase your odds of seeing words, group common letter patterns together on your board. If you have RE put it a the beginning that way or end as ER. Same in ING or TH or IES. When you start doing it this way, it becomes a lot easier to see longer words (or any words at all.)

4. Defense only gets you so far. You can spend your entire game blocking triples with 12 point words, but it won’t get you much of a score. If there is a gaping triple word score open, but I have another word that gets me 4 times as many points, I always play the other word. Sure, your opponent might get a decent score with their letters and that triple, but you just got 4 times as many points with your play. I always try and play my highest scoring word possible, even if it might set the other person up for something good. It also makes the game move along and a lot more fun.

5. S’s are gold. Not only is the letter S very common in the English language, but you can use it to make other words into new words. When you do this, you get all the points for both words you just made. They’re called “hooks” and S isn’t the only letter you can do it with. For example, turn Quip into Equip, etc. This is the best way to get big scores in the game, and S is the letter that makes it easiest. If you just drop an S to make your initial play longer, and it gets you 2 extra points, you just wasted that bad boy. Don’t let it happen again.

6. Know how the English Language works. The Scrabble dictionary is very accepting of bad grammar, weird slang, and even foreign words we’ve accepted into “English.” But I’ve found that just knowing what you can do to a verb, adverb or noun in terms of pluralizing is the best way to help you decide if a word is acceptable or not. Accordingly, it helps to know the definitions of the weird two and three letter words you are playing. For example, you can’t pluralize ET because it’s the past tense of eat, but you can pluralize AA because it’s a noun (A type of lava.) Now I know this is some next level nerd business, so I understand if you don’t really care THAT MUCH.

7. Practice. The more you play, the better you will get. And if you are losing by a ton, instead of quitting, watch the words the other person plays, it’s the best way to increase your vocabulary and improve your game.

Now that’s enough nerding out for one day. I’m off to the Internet Scrabble Club, where I’ll be playing against my fellow nerds and occasionally exclaiming profanities when they play a good word. 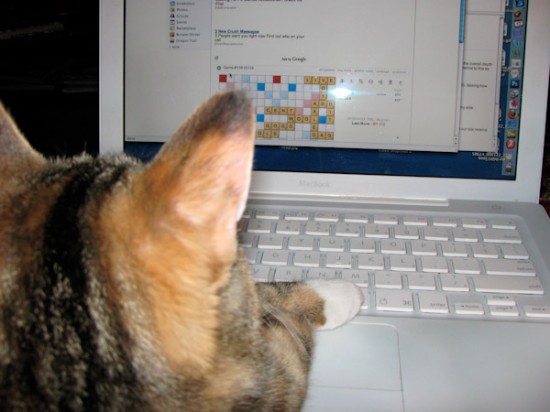 Tyra will also kick your ass.