I am down in mid-California, about to go ride Northstar with the Nikita team girls. While there may be an epic video coming out of this day, the real reason I was here was the Nikita Chickita event at Mammoth. I’ve been helping out Josh as event manager — getting sponsors, hyping up girls on the internet, and various other important tasks. All my hard work finally came to fruition on Saturday and I’d say we ran a pretty rad event. There certainly was a lot of free stuff for the girls, and well, everyone loves free stuff.

I had planned to shoot photos of the contest but got recruited to judge instead. I managed to snap a few shots from the judging booth, but nothing spectacular. I did manage to crush a few girls dreams and progress snowboarding with my judging though. Actually, I don’t think I did either of those things. In fact when one girl complained that she should have made finals I made the executive call to just let her in.  It worked out, she ended up getting third.

Anyway, the event was awesome. Super mellow. I’ve written about 4 different stories about it, and here is a link to the one I did on  Future Snowboarding. Actually, it ended up being a tag team with Kevin Westenbarger because this event was such a big deal we both ended up doing posts. Most of the photos are his, but here is my favorite of my photos from the event. This is the winners of the Nikita Sponsorship for the past two years:

After the event I rode at Mammoth and Holy Crap! that mountain is fun. I even rode halfpipe and got like “head high” (you know, the height of a human head.) Here’s a sweet picture of me at the top of the mountain. Thanks to Kim from Osiris for making this masterpiece happen. 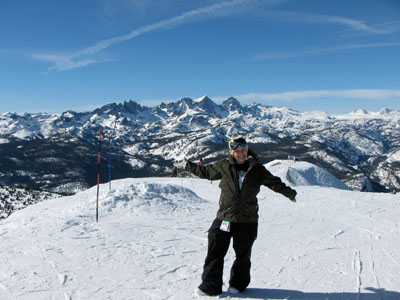