Woopra is Ruining my Life

Woopra is Ruining my Life 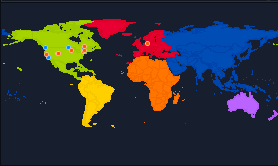 I haven’t felt like this since AOL first came out with its $3-per-hour dial up service. I remember back in the mid 90s, racking up at least one $200 internet bill before my parents told me I was only allowed 1 hour of internet time per day. Thankfully, it didn’t take long for internet service to become unlimited, and the amount of time I spend staring at the computer screen is now only taxing on my social life, not my wallet. Anyway you look at it, I am addicted to the Internet. But it wasn’t until about a week ago, that I realized I may have a problem. The thing that set me over the edge? Woopra.

What is Woopra? It’s software you install on your computer and your website to track traffic in real time. You can literally sit and watch users arrive at the site from across the world then see where they go on your site. There is also data on how many times they’ve visited previously, total amount of time spent on the site and even what browser they are using. If you were wondering, there are 12 people looking at YoBeat right now. In fact some one from Switzerland just showed up because they searched “Yobeat Profit Revenues.”

Now this whole thing is very big brother. I feel like a total creep that I have essentially designated one monitor just for watching people come and go. (Up to 16 right now.) I’ll even admit that sometimes at home I crack a beer and just watch Woopra instead of TV now. It’s not that I’m trying to spy on people, it’s more that after spending hours looking at google analytics and wordpress stats, seeing it move in front of my eyes is like a dream come true. And as a web editor, when my job is essential to generate traffic, it’s an amazing tool to see where people really go and how they use the site.

The real reason that I am finally acknowledging my problem though, is it’s again costing me money. You see, Woopra is free. At first. The basic account gets you 30,000 page views. Unfortunately, YoBeat topped that out in a few days. So now I’ve upgraded to the first level pay package. $4.95 a month. But since that’ s only good for 100,000k views, looks like pretty soon I’ll be forced to spend $14.95 per month. And who knows how expensive this might get the way things are going.

Don’t get me wrong, this is nothing compared to $200 for dial up, and it is a tax deduction. But really, I’ll say anything to justify it. I tried to just cut the cord when I first topped out the free account. I lasted a couple hours. Oh and we’re down to 9 viewers… guess I better go post something new.

Comments on "Woopra is Ruining my Life"