What I Learned in J School

What I Learned in J School 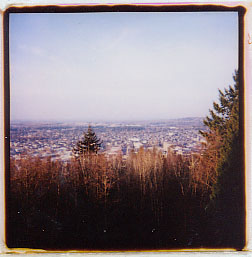 My college years were mostly spent at Western Washington University in Bellingham, WA, (pictured above from my Polaroid phase), which was most importantly, in the shadow of Mt. Baker. I will be completely honestly, the proximity to epic shredding was way more a factor in my decision of where to go to college than the actual curriculum. It just so happened, however, that Western actually had a decent journalism program (at least, according to them.) But seriously, the program turned out an award-winning bi-weekly newspaper and even taught a know-it-all-like me a thing or two.

Of course, that was before the print media started to crash, and back then the program was very newspaper-centric. I got plenty of questionable advice, such as when I was told even though I’d already completed internships at a national magazine, a web start up and a TV show, an unpaid internship “at a good daily” would really help me out. Another favorite moment was in my feature writing class. The purpose of the class was essentially to learn to write magazine-style features, and one assignment even included writing a feature, which we were to pitch to a relevant magazine. Obviously I wrote about snowboarding and it got published with little effort, much to the amazement of my professor. But that wasn’t the good part. No, the best was when we were sharing our ideas in class and one girl excitedly announced she planned to write a feature for Maxim. “You should,” I said, “they pay over $1 a word.” The professor literally responded, “Every word! Even ‘and’ and ‘the’?” But I digress.

Recently I got an email from a student in an English grad program looking for information on new media. Obviously, colleges haven’t quite figured out how to teach the ever-changing topic yet, but luckily, the beauty of new media is there’s tons of information out there and people like me in the field can share our opinions via the WWW. Needless to say, many of the things I’ve learned about writing and editing were not taught in college, but there are a few fundamental lessons that I can honestly thank my journalism education for.

1. Press Law. This was by far the best class I took (even though the professor was an asshole who actually threatened to fail me before the semester even started.) Being armed with the knowledge of my legal rights, and what someone can actually sue over, has made me more confident and a better writer over all. This knowledge will also probably prevent from getting sued, which is nice.

2. The difference between that and which. That implies the following statement is necessary and which, followed by a comma, means the statement following is optional and won’t change the meaning if omitted.

3. Ethics. It seems like ethics should be sort of automatic, taught by your parents and from kindergarten, but in the media, there are lots of things you’d never even think about if not brought up. Savethemedia.com has a great article on implementing these ethics into the new world of social media, which is definitely worth a read, but the semester I spent discussing these issues with a group of peers was definitely helpful in defining my own ethical code.

4. How to write a good story. The main difference I notice between the writing of people who went to college and those who didn’t is the “video camera full of words” story technique (a perfect description I owe entirely to Colin Whtye.) Those without official education often use this “and then, and then” technique. It wasn’t until I went to college that I learned how to really assemble a story to make it interesting.

5. Nerdy grammar stuff. Either they didn’t teach this at all in high school or I wasn’t paying attention, but I learned lots of useful things in editing class, such proper use of punctuation, etc.

I am sure there are many, many other things I learned how to do in Journalism school that I don’t even realize. College in general taught me well how to deal with bureaucracy and cut through red tape, and in writing this I am definitely not saying you can read blogs and save 80 grand. My point is more that college is super valuable to the field of journalism as a whole, no matter how out of touch the professors may seem at times. The fundamentals a good college education will give you are very important.  So what I am saying it these are just a few of the things that if the profession of media continues on the downward spiral it’s on, I can see us losing because no one will bother going to J school (and obviously, some of them matter more than others.)

Comments on "What I Learned in J School"