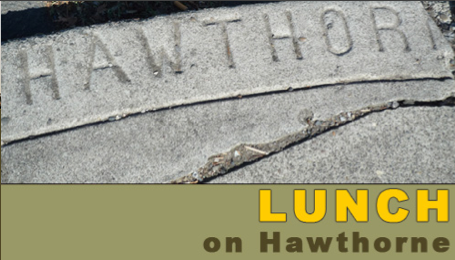 I started a food blog. Up to and including two people have said I should and I finally did it. Funny story though. My first food blog concept was a Portland breakfast blog, and I even went so far as to buy the domain name. Well, sort it. You see, I tried to buy it, but in my haste I accidentally bought pdrbreakfast.com instead of pdxbreakfast.com and by that point the excitement of the idea had worn off and I gave up.

But then, in a totally unrelated meal, Jared announced he wanted to eat lunch at every restaurant on Portland’s SE Hawthorne Blvd, and a new blog was born. Introducing lunchonhawthorne.com.

In general, the city of Portland, OR has no shortage of great places to eat, but that’s almost the problem. We would spend a solid hour debating and trying to decide where to eat, ending up so hungry we just gorged ourselves without even enjoying it. But at some point, we just started heading to SE Hawthorne Blvd at lunch time before even thinking about where to go. Hawthorne is a sort of eating utopia, especially around midday. Literally every type of cuisine one could desire resides on this street.

This has lead to a goal of sorts: Eat at every restaurant on Hawthorne St at least once.

We have a few criteria. We’re only including restaurants between SE 12th and 50th, and chain restaurants such as Subway or Burgerville don’t apply. And of course, the places have to serve lunch.

So there you have it. My attempt at a food blog. I’ve already linked every post to Urban Spoon and started a twitter, which you should follow here. So check the blog often as I generally eat lunch every day. So far I’ve already been to 6 new places, and even blogged about a few old favorites.

Comments on "Lunch on Hawthorne"