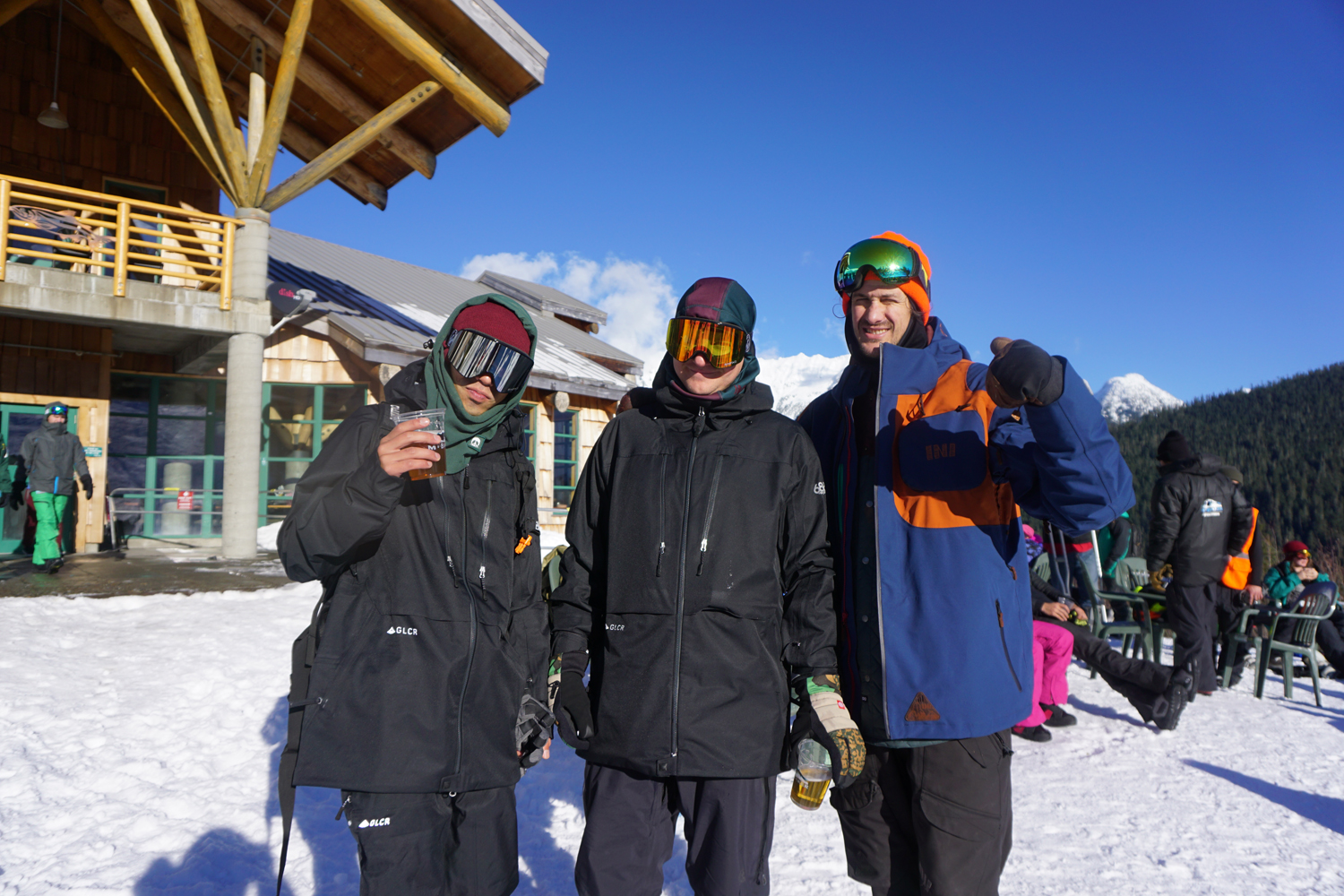 Don’t let his English-sounding name fool you, Frank April is as French as they come. What does that mean? Well, for one, he’s really good at snowboarding — assuming you’ve seen his video parts, you already knew that. Don’t think the fame of being a global pro gone to his head, though. His friends all agree – Frank is a funny, helpful guy you want to have around, and hell, he still waits tables during the summer to keep his head on straight.

Is “Frank” really the best nickname for Francois?

Exactly, yes. Everyone calls me Frank pretty much, maybe my girlfriend will call me Francois.

Is “April” a traditional French name?

How did you end up with such a non-French name, are you not a real French Canadian?

I’m a real french Canadian, but I guess mt grand grand grandfather was Italian or something like that.

I doesn’t sound very Italian either.

What are you hiding under that beard?

I’m not hiding anything. Just my chin.

Do chicks dig french kissing you with that beard? Does it help your game?

I don’t know, I haven’t played that game in awhile because I’ve had a girlfriend for over eight years.

How about snowboarding with a beard? On one hand, it keeps your face warm, on the other hand, it tends to gather icicles which could then make your face colder. For you, does it make things better or worse?

It’s warmer, that’s for sure. I don’t wear a neck thing to be warm. I’m pretty much fine with just the beard. But the other thing, when you snowboard a lot and you start sweating it gets all icy under the beard. But whatever.

Do you think your opinion would be different if you did more mountain stuff and less street stuff?

I pretty much almost only ride street. Sometimes I go backcountry but not that much. I know it’s kind of worse in the backcountry with the big beard because you get all the snow in it.

Why do you choose to mainly ride street? If someone was paying you to ride big mountain would you wanna do that more?

I really prefer right now street to the backcountry. I think I can focus more on that kinda stuff and try to put more energy into it. Finding new spots, trying new tricks, finding new trannies, for me it’s easier to find all that stuff in the street, because I don’t have that much experience in the backcountry. I have a lot of experience in the street, for like six years I’ve done that all winter. It’s just easier to find new spots.

It’s clear you’re insane watching you snowboard, but do you think you’re indestructible?

No, I don’t think so. Cause you know, I’ve broke all my bones. A few times my arm, my collarbone, I ruptured my spleen. So I’m no, not indestructible.

How do you find time to film a video part with all those injuries?

For the past four years I broke all that stuff at the end of the year, so it was ok to film.

Are you healthy this year?

Right now I have a heel bruise, kinda from partying. And in Japan at the end of the season I broke a muscle on my ass, left side. That was in April, so it’s fine now.

Oh, you like to party. What’s the ultimate party scenario for you?

I just try to make the best party all the time. I like bars, but not too much. I like nice parties with Rockstar girls and champagne?

So now that you’re a Global Pro life all champagne, caviar and private jets?

(laughs) No not really. I don’t really like champagne, I just think it’s kinda funny to say.

Another adjective that was used to describe you is helpful. I feel like a lot people don’t realize what goes into getting one shot for a video. Do you guys have any sort of set spot set-up etiquette? Does every one know their role?

With the Deja Vu crew, we’ve started working together like 8 years ago, so yeah, we know the certain way to set up all the stuff. When we find a spot, we start shoveling in a certain way. I make the jump and other people do the line and everything. It’s easier when you know people pretty good to be like, yo, you’re not shoveling, what are you doing? You have to say that a lot to LNP, he shovels but someone has to ask him. When you know the guys it’s easier to say, yo man, shovel please, we need your help and you’re going to ride it too. When you start to ride with other people, like last year I rode with Kuzyk, it’s harder. It worked pretty good but it was different because you don’t know, and you have to ask him if it’s ok to do something one way. It’s better when it’s just your friends.

Who’s the most useful snowboarder to bring to a spot?

Ben Biloqc. He loves it. He made a snow bowl in his back yard, so he has no problem. It’s fun to ride with him because he’s shoveling the whole time.

Who’s part in Deja Vu are you most looking forward to?

I will say…. Will Lavigne and Louif because they surprised me with a bunch of shots and tricks.

Speaking of, can you get me Louif Paradis’ autograph?

Yeah I can do that for you, for sure!

How did working on Deja Vu compare to working with Videograss?

That was different. Both are cool but this year was with my good friends so that was easier for some stuff, but for other stuff sometime it is good when is new people you don’t know haha

Why should kids buy the DVD? Any epic extras not found on a digital download?

Because we have a 70 pages/photo collection DVD, so only this is a good reason.

Do you spend much time in Whistler? That’s what you do if you’re Canadian, right?

Yeah, we try to go in the backcountry. I did that for one winter before coming back and focusing on the streets. Right now I think people are people are more into rails in Quebec because or snowpark is all about rails…So people stay here and try to find rails.

Do you think there are any new spots left in Quebec?

Yeah, we always find new spots. We know Quebec City pretty well, but you can go to like Montreal, it’s five times bigger. We have plenty of different cities in the winter we can ride. Every year we find new style of rails. Two years ago it was like a flat rail to redirect bank, something like that. You can always find new stuff, double rails, or whatever.

Do you have predictions for what the next big thing in rail riding is? Can you give us a leak?

I’m gonna say maybe flips. I think that’s kind of a new thing people like, so people are gonna try it. I know Jaegar Bailey and those guys have done it before, but I think we’re gonna see more people doing it.

What are you think about them? Do you want to do flips on to rails?

I did one. I’m down, it’s something kinda new. I’m not talking about like double cork to rail. I’m saying, a 360 in or a Backflip in are both kinda insane, just different style.

Do you think it’s gonna go to far?

Yeah like everything else – back 3 lip slide to frontside 3 out. Always go too much on the spins, and now people are gonna go crazy on flips. But I don’t know, it’s still fun to watch.

Who’s gonna be the first one to double cork on to a rail? Halldor?

I’m gonna say Bode. He did a nice backside rodeo 270 out, but I don’t know if it’s his style to do that kinda stuff.

I was supposed to go meet Chris Grenier and do like a little mini trip from SLC to Hood and go to the camps, but now my heel is bruised, which O hope will be fine soon and I will go do that. Right now I play golf every day, party a little bit on the weekend, and skateboard. And I’m still working where I used to work, at a restaurant here two days a week too.

Just for fun, or because that’s how glamorous pro snowboarding is?

What do you at the restaurant?

I used to be manager but now I just serving tables. I put my hair up in a pony tail and trimmed my beard a little bit.

Do you look at yourself as a role model? Obviously kids copy tricks and clothing styles. Do you feel pressure because of that?

Not that much, I would say. I don’t really feel like pressure like that. Starting in the winter I just want to do the best I can for a part, and try to find new spots. I really like to have nice style, so I work a lot on that, but I don’t really feel pressure. Well, a little bit, but not too much. When I’m actually snowboarding I’m focused on the best part. But when you chill and talk with your filmer sometimes you say, oh I don’t know if kids are gonna like that or not. But it’s not like a big thing for me. I’m not going to do something for someone else. Not only kids, for anyone.

Speaking of people who want you to do stuff, sponsors?

Pick up a copy of Deja Vu at a shop near you.Â  Find your at www.kidsknowdist.com/storelocator