STIMILON ONES TO WATCH 1999: WHERE ARE THEY NOW? 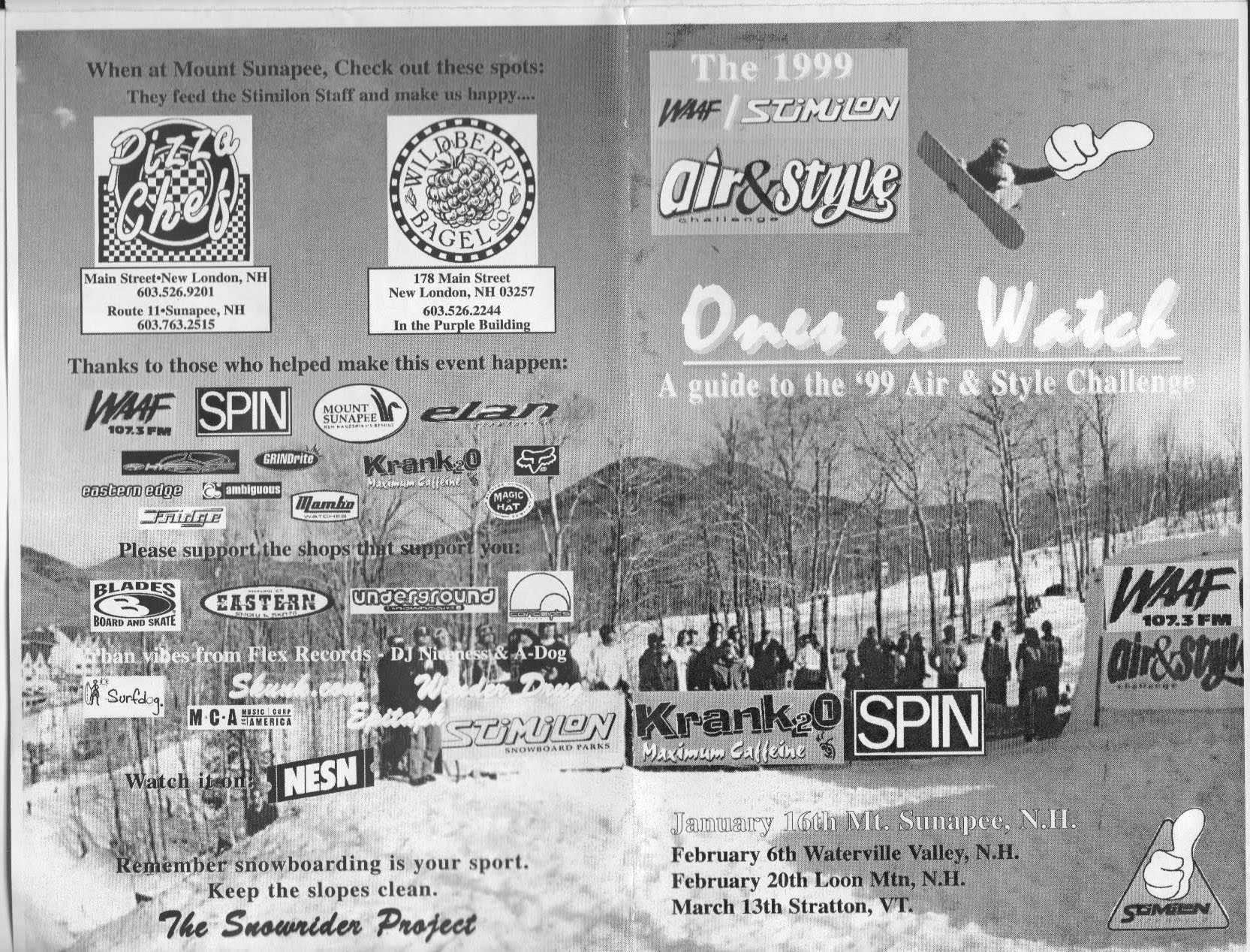 Before people really used the Internet, before shooting film was just a novelty, before the Olympics realized people actually might want to watch snowboarding – everyone who was anyone in the East would gather at Stimilon Air and Style events. Masterminded and ran by Dave and Laurie Olcott, this big air series launched a lot of notable careers in snowboarding and united a scene like no other. While the 90s had lots of cool snowboarding stuff, the Stimilon big air series tops our list of the most influential and important thing to happen in East Coast snowboarding, ever.

“The Stimilon events were so ahead of their time,” Scotty Arnold said. “Dave made some of the best jumps I’ve hit even to this day, and I if it weren’t for those events I would have never been able to go anywhere with my snowboarding.”

And while does Davo deserve a lot of credit for putting on incredible events, he was quick to remember his wife and partner Laurie, who sadly passed away on February 12th, 2015 after a battle with cancer.

The diligent staff who made it all happen.

“I wouldn’t be anything in our industry without her,” He said. “She did so much behind the scenes and none ever knew about it because she didn’t do it for the attention. SHE – was the reason – I was.”

We recently discovered the 1999 “Ones to Watch” brochure and realized almost half of the people on it are still actively involved in snowboarding, and the rest, well, who knows? So we figured it was time for an update.

Despite our best efforts, we were unable to track down Myles. He was last seen in South Lake Tahoe, where he was busy raising a shredlet of his own. If anyone has any information, let us know in the comments!

“I live in SLC and work and ride in Park City mostly. Still shredding a lot but only in the winter now. I am a massage therapist at a spa called Align. I’ve been working there for 11 years. They are super good to me and I get lots of time to shred. Keeping the mountain life alive over here.”

“I have been filming a bunch of snowboarding. I started a company called Stoyach. I am a landlord in Park City. Still snowboarding a lot and competing in fun events like the Bode Merrill mini pipe. And I skateboard a lot, too.”

Adam spent several years as staff photographer for Burton, and is currently in the freelance game. Hire him at adammoran.com!

“I’m living in southern Maine, own kayak and fish New England guide services, work for wilderness systems kayaks and am the father of 2 boys 1 girl, and married for 5 yrs. Still lurking the NH snow in the winter, hosting Mike Baker banked event and grooming at Waterville last year.”

I’m back east. I live in Mass once again. Currently I’m a stay at home dad:) My contract with Nike ran out in 2011, 12/13/14 I was with Rockstar. That’s now over too. So now I am trying to refocus… see where the road leads me. Video Games is still active and doing well with USASA. I am working on the board with TTR trying to help snowboarding remain relevant as thing progress forward toward the 2018 Games. I bought a house and have become somewhat of a Macgyver in terms of how to fix things and not pay contractors to do it for me. Being a stay at home dad is a full time gig and tall task on its own. I really love the snowboarding world and I hope to find a place to grow there but the industry as a whole is in a tough spot and it’s not getting easier, so my focus maybe slightly broad right now to find a new career path… who knows, maybe some industry leader wants to kick some ass and bring me in to shake things up!”

After a few years as part owner and marketing director at High Cascade, Preston sold his shares and now lives in Bend, OR with his wife Dawn and helps make one-footed snowboard antics possible with Crab Grab.

-Starting my 12th year at the Jackson Hole Ski & Snowboard club: 11 years as head snowboard coach (2004-2015), 9 as the Director of the Freeride Program (2006-2015) and most recently I moved into a new position: the Director of Advancement (2015-present) focusing on fundraising, marketing and communications. Jhskiclub.org

-I got “re-sponsored” (HA!) in 2012 when I started riding/designing boards for Notice Custom Snowboards out of Whitefish, MT noticesnowboards.com

-I rarely hike or even go out of bounds. Still love to take hot laps and ride the park/pipe. Pow is fun, but I’m more of a quantity over quality kind of guy.

-In 2010 I started the Wednesday Night Lights Snow Jam Series at Snow King Mtn with Rob Kingwill. It’s a local rail jam for all ages designed to be a fun, casual competition for kids and adults

-I co-founded the Wild West Skateboard Contest Series in 2013 which now has 5 events in 2 states: WY & ID Wildwestskateboarding.com

-I’ve somehow managed to stay involved with snowboarding and create a life for myself in Jackson Hole with my amazing girlfriend Amy Glenn. I feel pretty lucky about all of that.”

“Been out in San Diego for almost 10 years after 6 years in Boulder/Denver Colorado. I’m now a DJ and it has been my source of income since 2003. I only get to ride a few times a year these days at Big Bear or Mammoth, but I live at the beach so I am surfing as much as possible.”

I’m living in Ansonia, CT. I have an 11 year old daughter, Ava, and will be attending Lincoln Tech in September to become an electrician.

Well, after Stimilon I was forced to get a real job and face the world head on. I moved to Burlington for about ten years, worked at the big “B”, had a little Chemo adventure I’m sure you’re aware of and am recently officially in remission. Then I decided to move back to CT to be closer to family and help my mom who has MS. Now I work at Victorinox Swiss Army helping manage their watch repair centers in the U.S. I currently live in Shelton, CT with my girlfriend. I still skate a bit and ride, but not nearly as much since the hills aren’t as close anymore. I’ve gotten into cars a bit and go to a lot of exotic car shows. I just started exercising again as now that’s I’m 40 I guess I need to! And that’s pretty much where I am today!

“I’m living in Steamboat Springs, CO. I just got married this past April and we have two huge dogs (a newf and st bernard.) I still snowboard a ton in the winter and ride mountain bikes in the summer. I work at a dispensary, which my husband owns. Life’s pretty darn good in Steamboat!”

“1999- I won the Stimilon- 1st place Overall Pro Championship- back then it was just old cameras, pagers and VHS lol.

That comp opened up a lot of doors, I was riding for Burton B team with Ali Bernsten, who has actually remained a great lifetime friend of mine. Love her she is doing great in NYC.

2000- 2001- got wildcards for US open big air, also was invited to the Grand prix big air series tour out in California and did events in Tahoe, Breck, and Big Bear. Which lead to a few the summers training at the Burton House on Mount hood. I ended up getting 4th in the US open big air in Stratton, Vt in 2001 and just overall had great time riding all over the West and East coast with the team. Around 2004 I had a bad injury to my right shoulder in a contest. Resulting in a broken collarbone. I did treatment called Ondamed -Wave Medicine with my father Dr. Steven Bock and then ended up getting certified for the therapy after

I healed. I can now treat others in that field , I did that for about 7 years. Then ventured to South Florida where I have a condo and started Photography Business called Elitestar Photography. I live in a small surf town called Delray Beach. North of Miami. I live a nice mellow and simple life. Love to travel and go to events. I still go up North and out West to see the family. Spend my free time on the beach and with friends. Love doing charities and events down here. I love simple things no kids yet but one day.”

“Oh hey, that’s me! After I tore my ACL, broke my ankle and gave up on the pro snowboard dream, I went to college at Western Washington University, freelanced for just about every snowboard publication known to man, interned for Snowboarder Magazine, was associate editor at Bluetorch (which became FuelTV), spent two years doing wakeboard and boardercross research for the X Games, six years running running web content at Alliance Wake, a year and a half as social manager for Nike Snowboarding, some other stuff I forget. And obviously I still run Yobeat.”

“So what’s the Nug doing? Living the life Brooke, living the life. So I am a Domestic Goddess, raising my two fantastic kids 6 and 1. I live in NH, married to my college sweetheart 16 years of love. I also have my own baking business Sugar and Flour. Jason “Larry” and I are trying to keep true to our roots and give our kids the opportunity to see the snow and skate world. Oliver, 6, has been riding since age 2 and Ellery will give it a shot this winter. Oliver absolutely loves snowboarding and can totally hang with the big boys, which is sweet. I feel so fortunate to have meet the tight group of friends that I did through Stimilon. It’s built life long friendships. Thanks to Dave and Laurie for creating something so awesome. I couldn’t ask for anything more than I’ve got! I love my life.”

We also couldn’t find Karen – does anyone out there know??

Making it Big in Big Air by Pat Bridges

RIP Laurie, you are greatly missed!