DEAR SNOWBOARDING: STOP USING THE WORD GAY AS AN INSULT

Last week, pro skier Gus Kentworthy came out to ESPN. Overall, the response has been great and supportive, Kenworthy told the Wall Street Journal. “I’ve had a ton of people reach out to me, which has been amazing. I’ve had other athletes in my sport, Bobby Brown, Josh Christensen, Tom Wallisch, I’ve had snowboarders..” Unfortunately, one snowboarder, who’s legendary status raises his voice louder than the others, took to twitter with a poorly-worded joke. 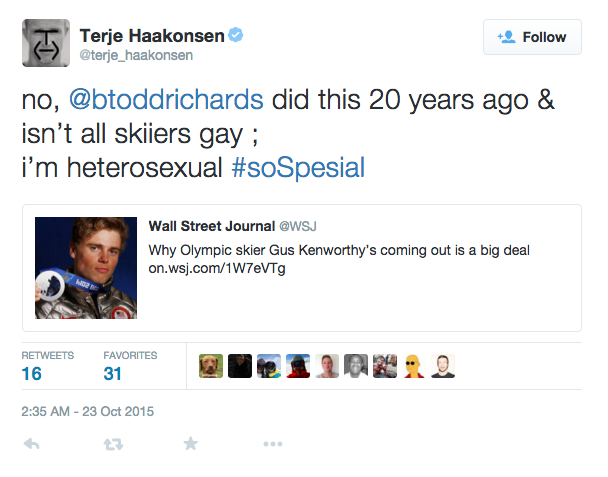 This tweet has brought a firestorm of unwanted attention upon Terje, who just doesn’t seem to understand what the big deal is. “Every time someone shockingly “admits” to be gay he pins under “abnormality.” For me sexuality is insignificant,” Terje went on to tweet after receiving blowback on social media.

Terje is right in some ways – your sexuality doesn’t and shouldn’t matter when it comes to your skiing or snowboarding. But after the triple corking is done, Gus and every other athlete lives in the real world. In the real world homophobia still runs rampant, words and thoughtless jokes hurt, which is one of the things Gus opens up about in the article. Since Terje probably didn’t even read it, here’s the actual excerpt that explains it:

Kenworthy has watched carefully these past few years as the world around him has grown more accepting. Gay marriage is legal now, attitudes are changing. He was excited this spring when Caitlyn Jenner came out. He believes that people are more aware.

“But then at the same time,” he says, “people are literally oblivious.”

For him, there have existed day-to-day reminders. Take, for instance, the former sponsor who made a crude anti-gay remark about why Kenworthy was once late to a competition. Take his physical therapist, who once told Kenworthy that he couldn’t even imagine talking to a gay guy all night. (“I thought, ‘You’ve talked to a gay guy for two hours a day, four days a week for seven months.’ “)

Take the constant drumbeat of living in a culture that uses the words “gay” and “fag” as commonly as “stoked.” A daily check of social media for Kenworthy means encountering posts written by friends or peers who, without knowing it, reveal what they think about his sexuality. Today, it might be a Facebook rant or an Instagram post from a pro snowboarder who’s annoyed that “skier fags” have infiltrated another contest or complaining that a shoddy halfpipe is “gay.” Tomorrow, it might be a tweet written by an athlete he admires who is “sickened” by same-sex marriage.

“There’s a lot of testosterone in our sport, and those derogatory words get thrown around like crazy,” says Canadian freeskier Justin Dorey. “A lot of people don’t think twice about it because those words don’t mean anything to them.”

In 2015, where news travels at the speed of the Internet and you’re constantly inundated with new information, its easy for the non-affected to shrug and say, big fucking deal. But this is a big fucking deal, and it’s time for snowboarding and all action sports to remove homophobic slurs from our lexicon entirely. Terje made himself look like a moron and deserves every bit of media scrutiny he did and will receive. Todd Richards, who had a front row seat for the shitshow thanks to a seemingly out of nowhere mention in the tweet, said the whole situation is a case of stupidity.

“100 percent of comedy is timing, and if you’re going to diss someone in English, at least use spell check. Utmost respect for Gus’s courage in a close-minded world.”