HOW TO SPOT A GAY SNOWBOARDER 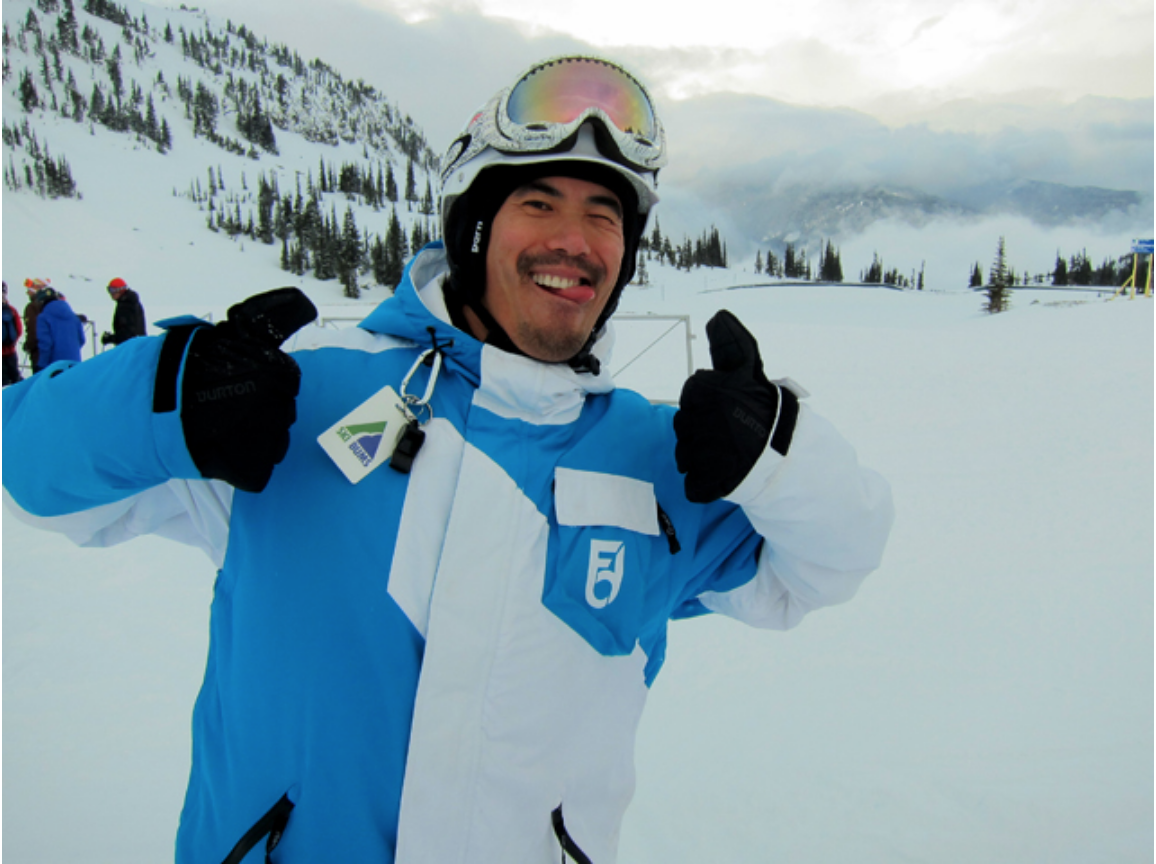 All photos courtesy of Ski-bums.org

Thanks to androgynous snowboard gear and lots of layers, it can be hard to tell if someone is male or female on the hill, much less judge their sexual preference, not that it matters.Â  But we figured, if anyone knows how to pick out the gays and lesbians on the hill (not that there’s anything wrong with that), it’s Chris French, the owner of Ski Bums. Chris’s organization puts together trips for LGBT skiers and snowboarders to glamorous locations around the world, a chance for gay skier and snowboarders to unite and shred. So read on to learn what to look for and remember, acceptance is all the rage.

Where are most gay snowboarders who come on your trips from?

We’ve got more than 1,500 members from all fifty states – but we got our start in NYC, so we still have quite a few New Yorkers. That said, many of ‘em are folks who grew up in mountain states like Colorado, Utah, Vermont and California.

What’s the ability level of most gay snowboarders?

About half are intermediates, but we’ve got a lot of serious shredders! Thirty percent of the BUMS are expert riders. 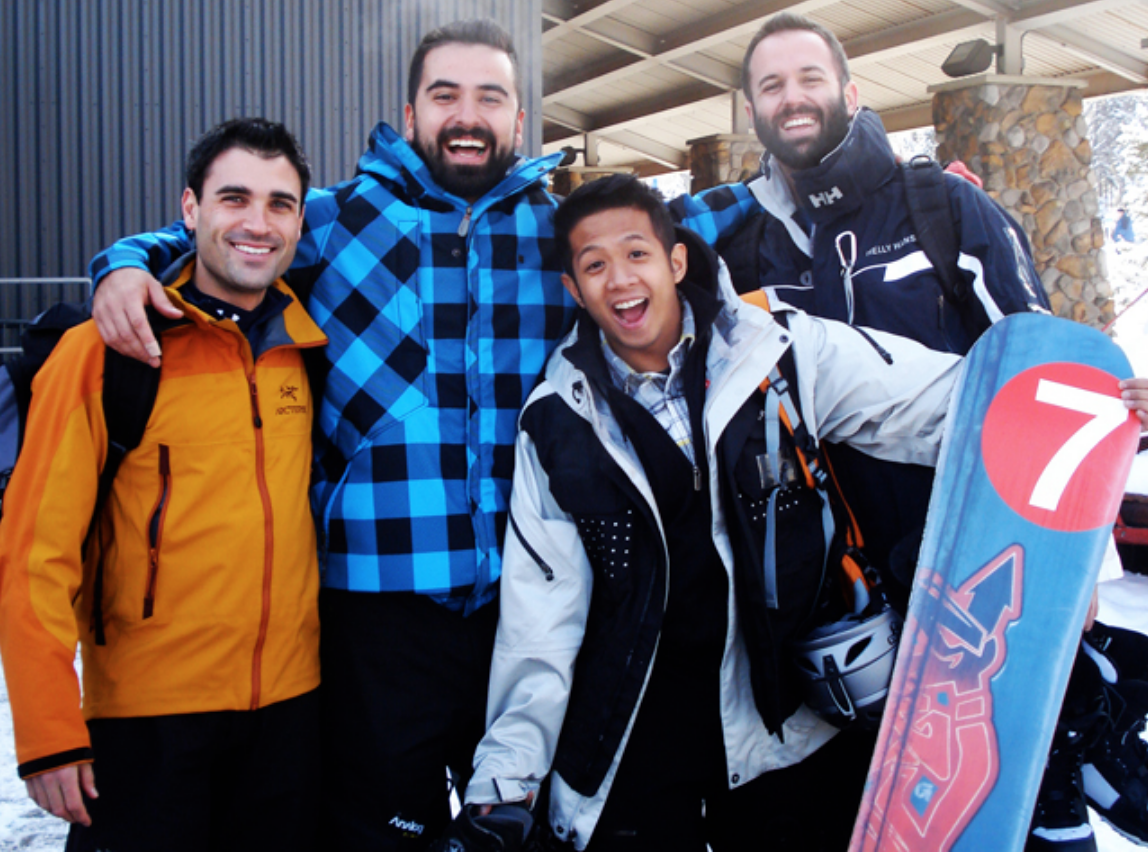 What type of terrain do most of the gay snowboarders on your trips enjoy?

It depends on where we are. When we host an East Coast trip, for example, we’ll have a sizable group of people who are relatively new to the sport; they’ll hang out all day on the groomers and set their own goals – they just might be praying to make it down their first black diamond without biting it. But when we take trips to major destinations — like Japan, Bariloche, Chamonix or our upcoming hell trip to Alaska — people will be riding the hardest terrain they can find. Only a handful of our riders are real tricksters who spend the day in the parks or pipes; on last year’s trip to Jackson Hole, our advanced riders spent every day off-piste in the sidecountry

On the mountain? I hate to say this, but no, not really! The stereotype doesn’t apply… the gay boarders I know aren’t usually the ones in the huge oversized multi-colored outfits that grab your attention on the chair.

Okay, fine, they may have chosen their lime-green goggle lens because it matches the accent color on their helmet, gloves, and bindings. But to tell the truth, gay snowboarders dress pretty much exactly the same as straight snowboarders.

How old are the gay snowboarders you’ve met?

A whole range. I know some awesome dudes who have been boarding since the early 80’s and they’re retired now – and last year, we got to do an amazing afternoon with high school kids from Park City High School’s GSA (Gay-Straight Alliance), where we met 14-year-old gay boarders. They had never met any gay grownups who loved the mountains as much as they do. That was an inspiring day. 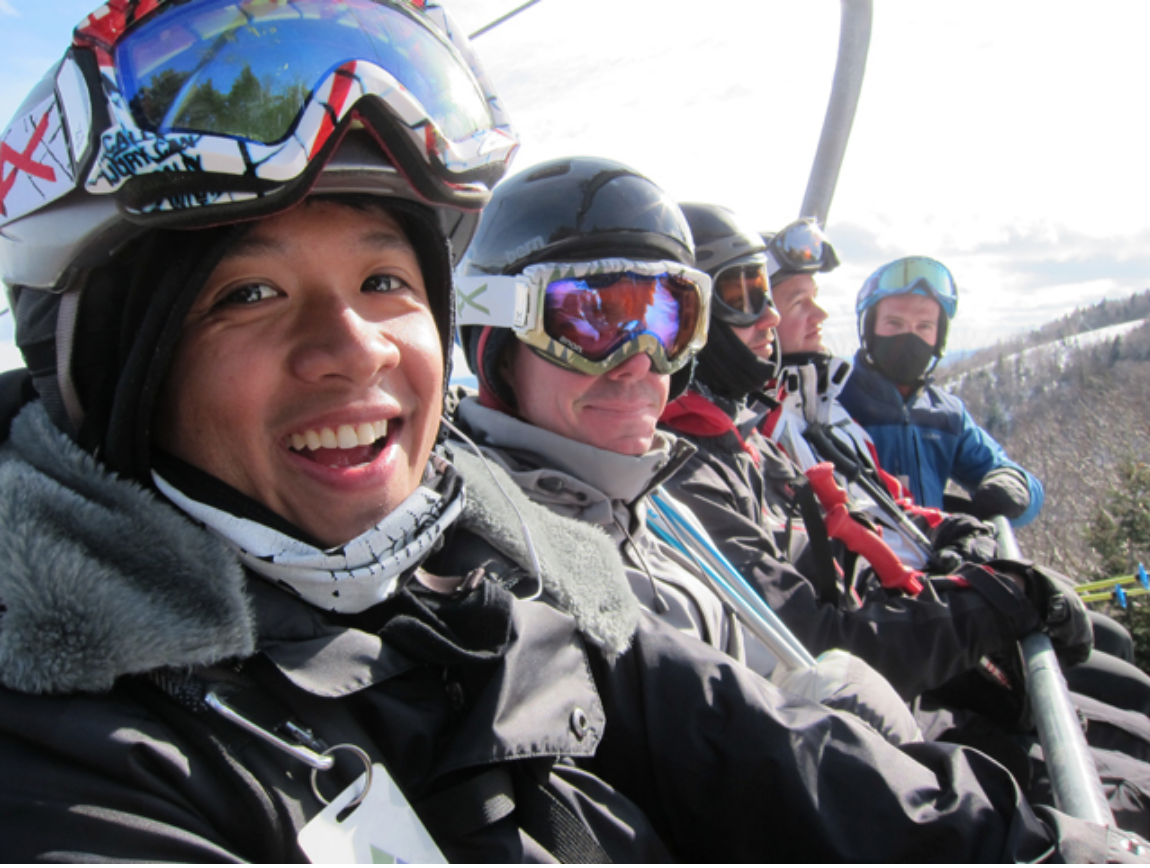 They ride the chairlifts!

Best at being gay? Best at snowboarding? Or just “The Best!” in all respects?

Hmmm. There a few out gay snowboarding instructors at Jackson Hole who have incredible technical skills. There’s also a group of young locals who ride just about every weekend at Whistler-Blackcomb, and some of those guys are gay. I got one of ‘em to wear my helmet cam for a few runs last year, and the footage was insane. But like all of us, I’ve met incredible snowboarders where the subject of who they love simply never came up, and I’ve learned not to assume that just because a guy is masculine, or just because a girl is feminine, doesn’t mean that they may not be gay. 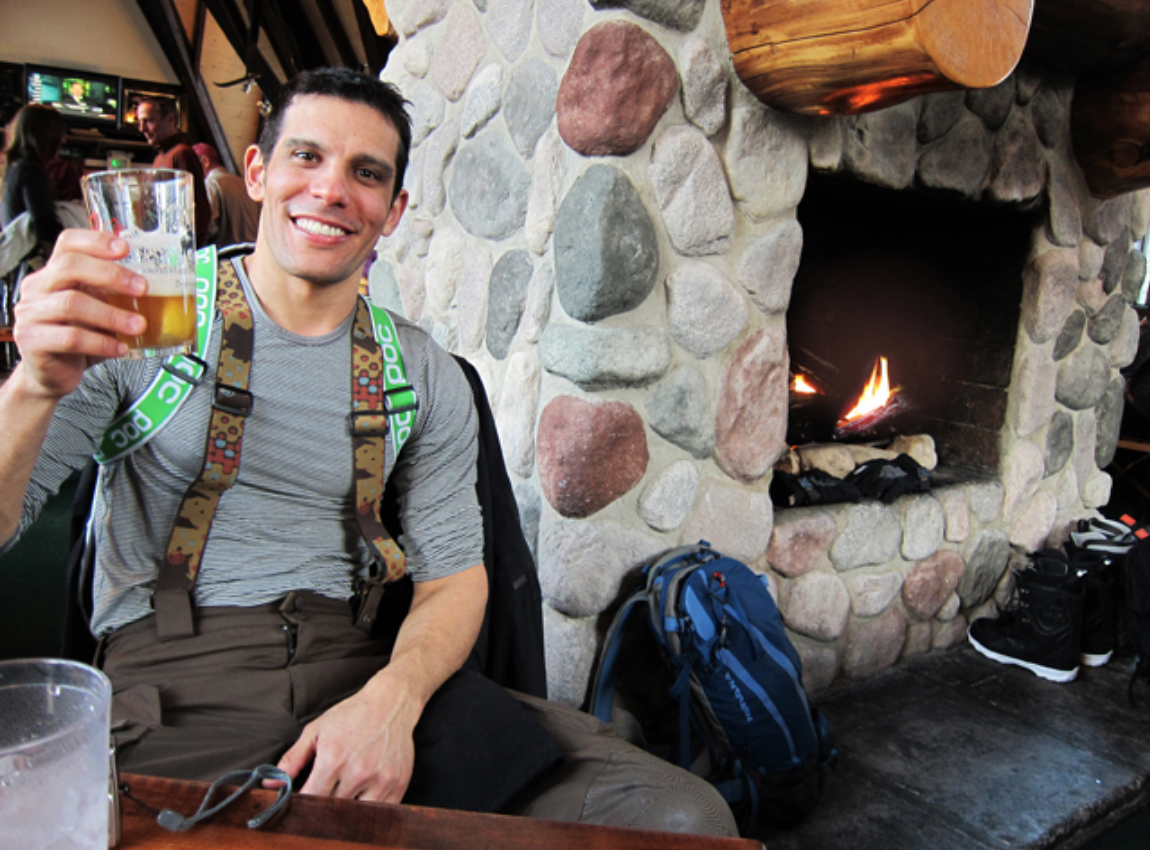 Alright, so you can’t tell. Enough of that, let’s get serious. Statistically there are enough pro snowboarders that at least one of them must be gay. Why don’t you think there are any openly gay (male) snowboarders? (There are definitely a few out lesbians!)

I truly hope that will change soon. There are pro riders who have come out socially – their friends and family know that they’re gay, lesbian or bi – but they’ve never said anything to the press. I met Travis Rice while SKI BUMS was hosting a trip to Chile. He was down there filming “The Art of Flight.” He told me that top-level male snowboarders had come out to him personally.

Why hasn’t any of them come out to the press? I’m not sure. I think the atmosphere is ready for it. Snowboarding is about freedom and individuality. It embraces counter-culture dynamics from people who don’t play by the rules. No matter who you are, of course it’s scary to be the first. But as other out athletes have learned — like former NBA player John Amaechi, who’s a good friend of mine — simply making one public statement can be enough to inspire an entire generation. Elite snowboarders who are gay have an incredible opportunity. When you’re being bullied in school, or simply feeling like you don’t fit in, one role model can be enough to help a gay teen make it through the tough years. 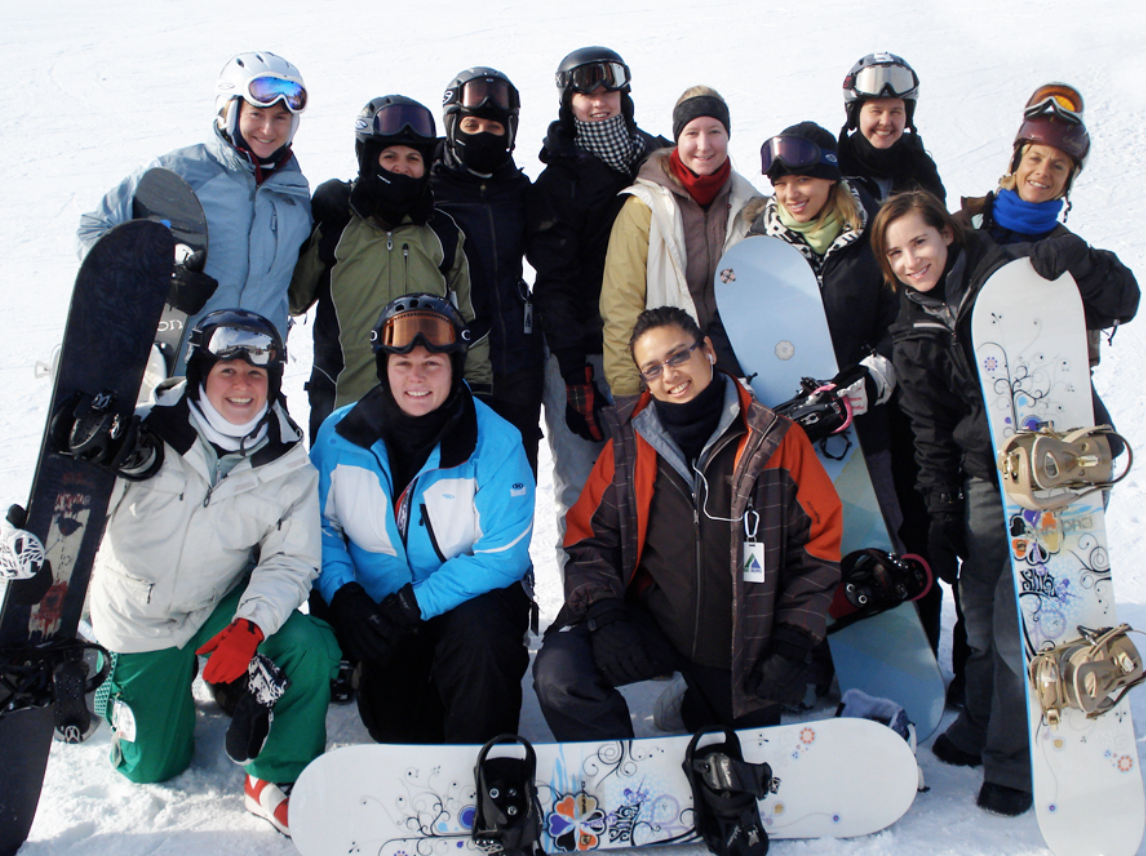 And don’t forget about lesbians.

Going into Sochi, how would you like to see snowboarding respond to Russia’s new anti-gay laws?

What’s happening right now in Russia is horrific. Under these new laws, I could be tossed in jail and deported for simply holding hands with a boyfriend. Any public statement in support of LGBT people – even if you’re straight – is against the law. They’ve already banned all foreign adoptions of Russian children to anyone in a country that permits same-sex marriage, and they’re proposing a new piece of legislation that would make it a crime for gay people to raise even their own biological children.

In some ways, I’m glad that Russia is hosting the Olympics. It’s bringing international scrutiny to a frightening program of oppressive laws, and Russian LGBT people need us to stand up and help protect them. Unfortunately, the IOC has very strict rules about political statements from participating Olympians, but they’ve pledged that they will allow no discrimination against LGBT athletes. For its part, Russia has pledged that it will uphold its laws – so it’s anybody’s guess what’s actually going to happen. The best and most powerful thing that any top-tier snowboarder could do would simply be to come out, as Aussie snowboarder Belle Brockhoff recently did. There were two dozen openly gay Olympians in London, and I think we could experience a tremendously powerful symbolic moment if an out gay athlete wins a medal in Sochi.

For equality-minded straight allies, Athlete Ally recently launched a campaign called “Uphold Principle 6,” where Olympians are holding the IOC to their pledge that every individual must be able to practice “without discrimination of any kind.”

When a top-tier snowboarder comes out, I hope we’ll see a full embrace from the snowboarding world, with public statements of support from sponsors, gear makers and riders everywhere. I happen to know a few hundred snowboarders who will be very, very inspired when that day finally arrives.

Until then, I hope snowboarders will simply do what they do best. Get out on the mountain, be themselves, and let nothing hold them back from having a blast out there!