10 HOURS LOST IN THE WOODS: WHY YOU SHOULD NEVER GO OUT OF BOUNDS 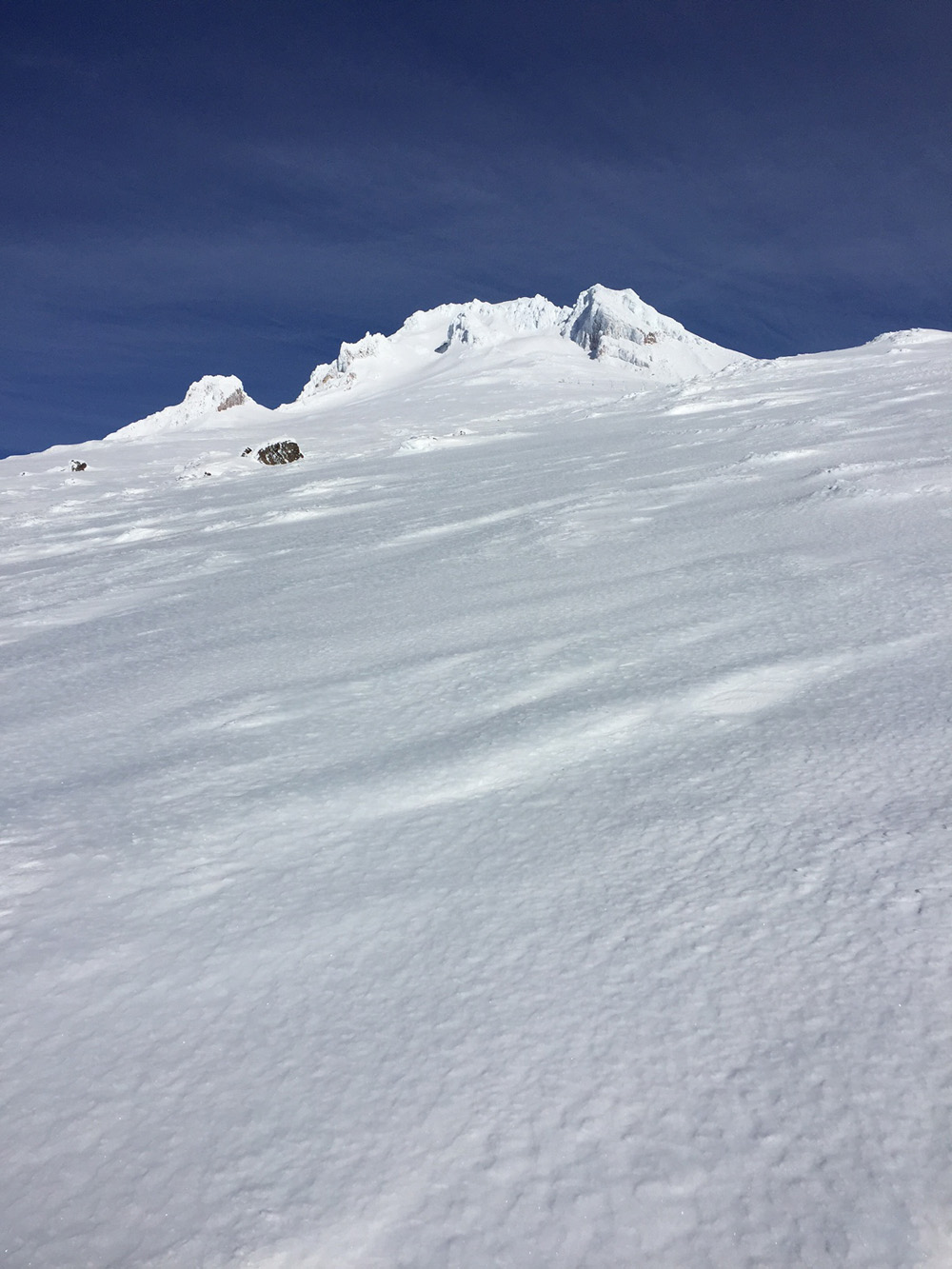 It all started because I needed to get an Instagram. After all, if you snowboard and don’t get any likes to show for it, did you really snowboard? Now Timberline was gorgeous on December 28th. We’re talking mid 30’s, blue bird, with a foot or so of fresh powder. I was pretty sure we could get something epic. Party Time Nate and I hopped on the Magic Mile as soon as it opened in hopes of scoring some untouched wind-drift gully action. Of course, the thing about the Magic Mile is there’s no tree cover, so the terrain actually gets horribly windblown – but if you know where you’re going – just a smidgen out of bounds to the West – there are a few sizable gullies to enjoy. Surely, even a snowboarder of marginal skill such as myself would be able to kick up a little pow or maybe even catch some airtime worthy of the feed.

We dropped into the highest gully, much to Nate’s chagrin – he was aware we may have to hike out of this and ew, who wants to hike? – but sure enough, an untouched wall of pristine pow sat in front of us. Nate tried to explain we should cut over, but I was determined to get awesome and pretty sure we’d be able to make it out or at the very worst, end up on the trail to Gov’y, a totally fun run with the added bonus of hitchhiking back!

I dropped in, totally didn’t have enough speed and threw up a weak ass powder puff only acceptable because I am apparently a middle aged woman (at least according to my longest standing intern.) With the gram in the bag it was time to get the fuck out of there, but not before attempting to get a back up gram on another untouched pow field and losing Nate in the process. 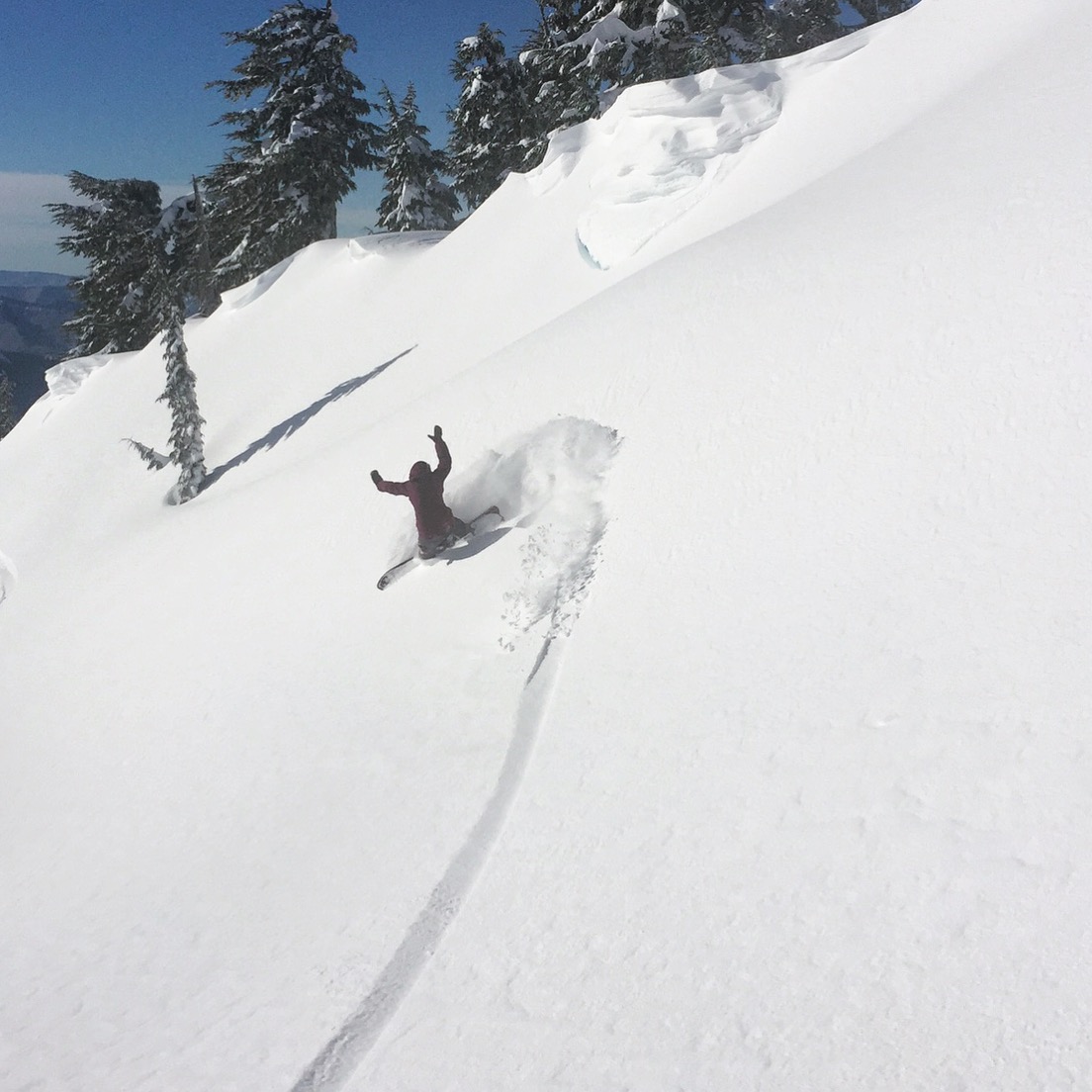 The shot. Instagram got. Now it’s time to get lost.

I waited for a bit and then said fuck it, we’d meet at the lodge and proceeded on my way. I did my best to cut left, all-the-while slashing untouched pow through the wide open evergreens on Mt. Hood. It was a damn sick run, and man was it long…

It’s probably when I hit the first river that I realized I may have fucked this one up. Who knows how many miles I’d been riding, most were easy going and the few flat spots were great for practicing my cross-country snowboard skills, and really not that bad thanks to the powder prowess of my Arbor Shreddy Kruger.  But the top of Mile to the bottom of Jeff Flood is only about two miles and I’d definitely gone more than that. 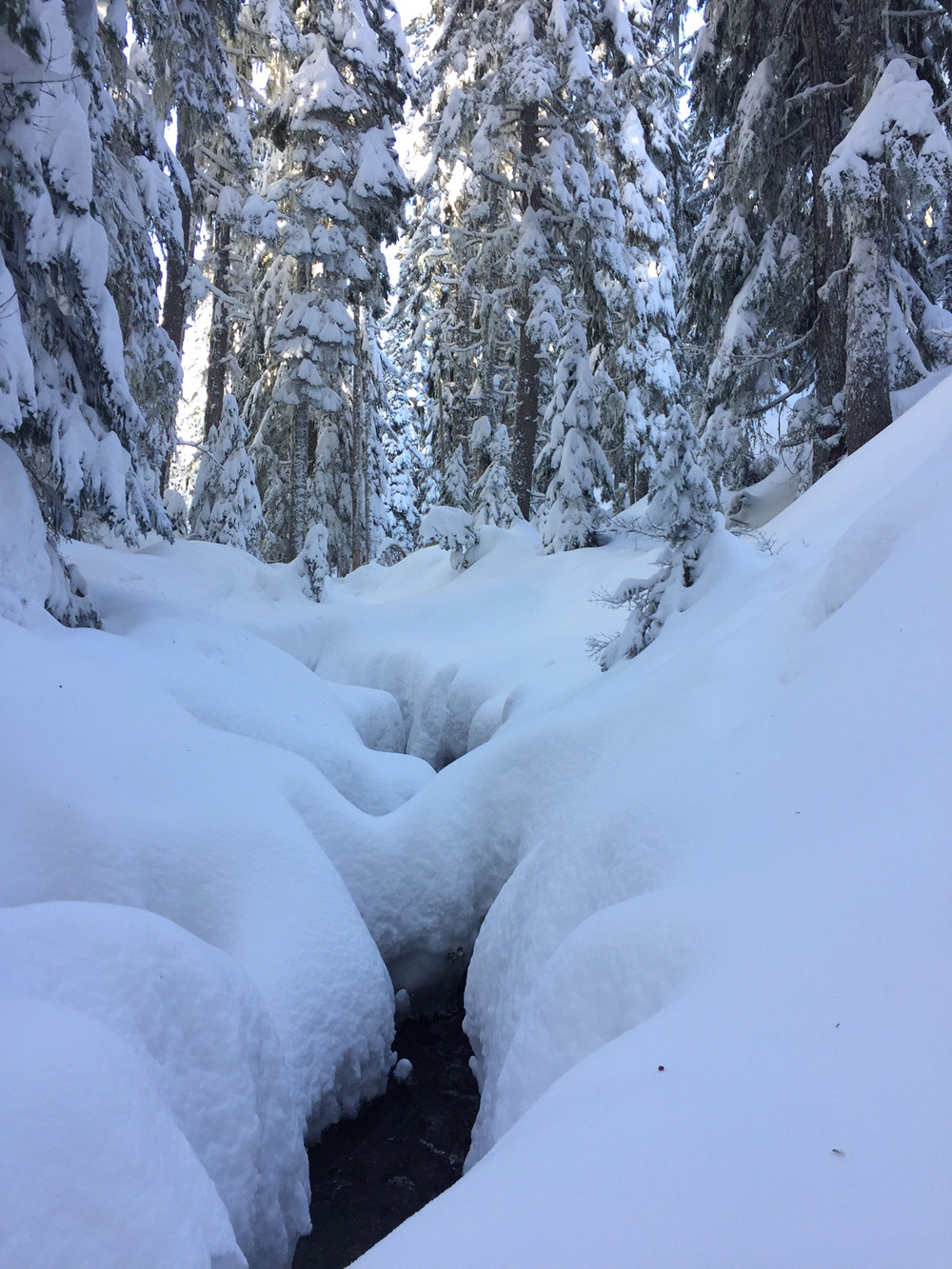 I was still holding out hope that I could connect with the Alpine trail, which runs directly into Charlie’s Mountain View, but at this point desperate measures need to be taken. I sent out a Snapchat SOS to Timberline marketing superstar Ricky Hower, and took the even more desperate measure of making my way across the creek – which was surrounded by 6 feet of snow – and then the ultimate sacrifice, hiking straight up hill to get to the top of the ridge line. I don’t want to talk about how long it took me to make it up those 500 or so feet, but by the time I did, it seemed the sun may have been starting to set.

The day as seen on my Snapchat

I finally reconnected with Nate via text, who had ducked out in time and was enjoying a beer in the lodge, and tried to remain calm. “Dude I’m so lost,” I wrote back. “Down and left,”  he said, unaware of just how dire of straights I’d gotten myself into. Ricky was slightly more helpful. 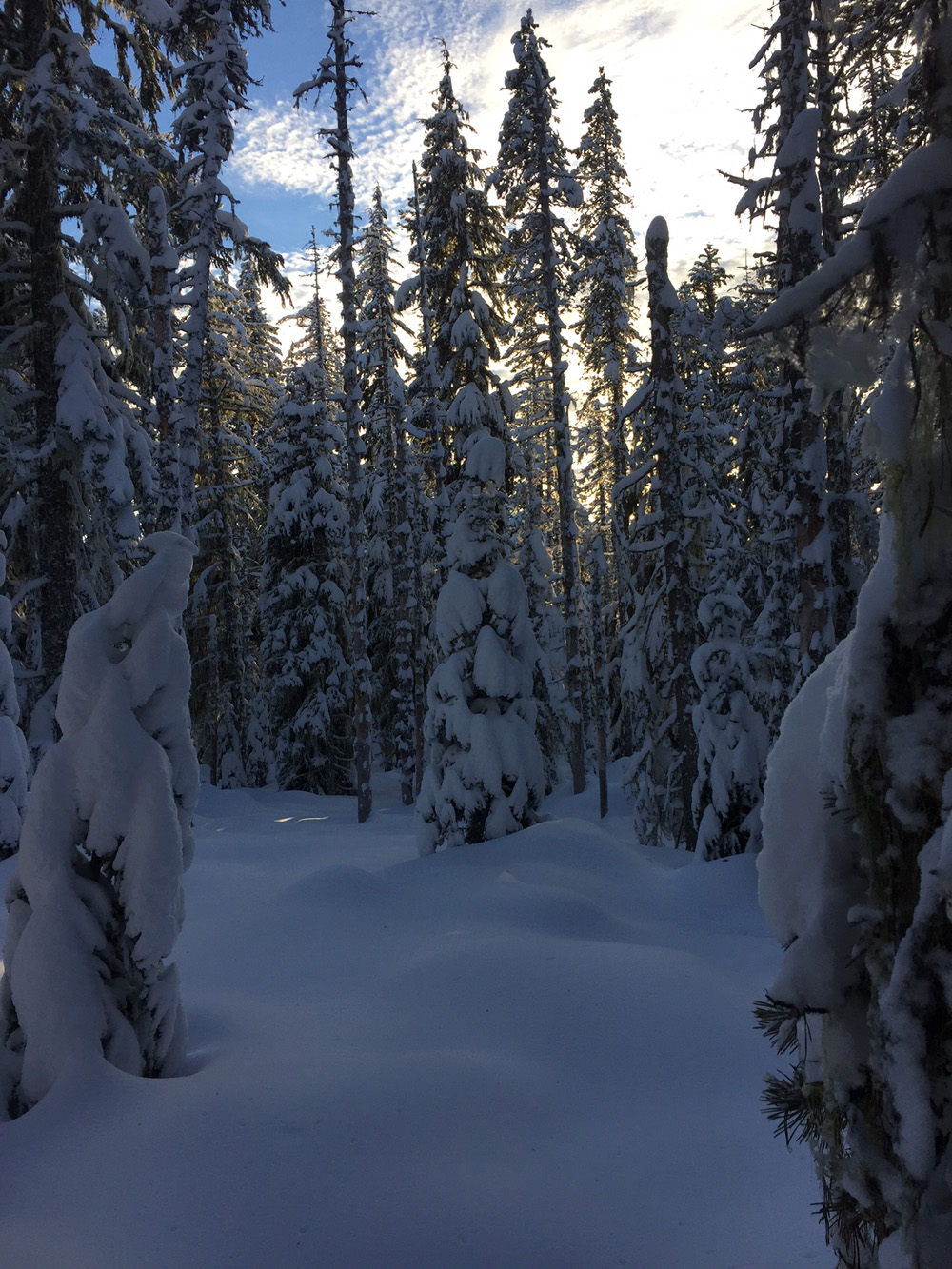 It’s all up hill from here

He sent me a pin which showed where I wanted to be, .6 miles away, which while not really that far, is a lot less fun when you’re trudging though knee-to-thigh deep snow with a snowboard, soaked gear, and variable terrain (almost none of which slanted downhill.) But Ricky is a great cheerleader and he assured me I had plenty of time before sunset, and said he would call me back in a bit to see if I wanted him to call ski patrol. I fumbled with my phone compass to make sure I was headed south and thanked the ghost of Steve Jobs for the iPhone (and the fact the battery hadn’t died, yet.) When Ricky called back I was not having fun anymore. “Yes, I want you to call ski patrol, please send someone in here to rescue me,” I pleaded, fully okay with admitting defeat.

Unfortunately, I was so far down that I was basically out of ski patrol’s jurisdiction, and if I wanted a rescue, I’d need to call the sheriff, “But that’ll probably take three hours at least,” they told me. The ski patrol agreed with Ricky, I was on the right track and should just keep walking. Despite the general unpleasantness of my winter hike, the time did go quickly! Unfortunately that meant I had made it about .1 miles by the time the sun was really starting to drop. Ski patrol told me it was time to call 911 and request search and rescue, but of course, in order for them to find me, they wanted me to stay put.

I was soaked with sweat, which was beginning to freeze over as soon as I stopped moving. The ski patrol told me it would take them a few hours to get there and I should just keep walking. The sheriff told me otherwise. Every time I moved my location would change, and over the course of the night I had to call 911 a couple more times to report my movements, but miraculously, my phone stayed charged. When the rescuers took to the trail about an hour later, I finally sat down and huddled up for the long haul.

I took off my wet mittens, which were only succeeding in making it harder for me to use my cell phone, and tried to huddle my arms into my jacket. Unfortunately, once your arms are in your jacket it’s really hard to zip. So that didn’t really work. But despite my struggles, it wasn’t long before I heard whistles and people shouting my name. By some miracle, I had made it a few hundred yards from the cross-town trail, which was nice and packed down by cross country skiers.

The rescuers, who are all volunteers, gave me new gloves and stocked me up with a Gatorade and a Cliff bar. They also lead the way with snow shoes and we easily made it back to Govy in 15 minutes. My ordeal was over, and a mere 10 hours after I’d gotten off the Magic Mile. I didn’t have frostbite or have to cut my arm off or anything, so I’d say it could have gone worse. 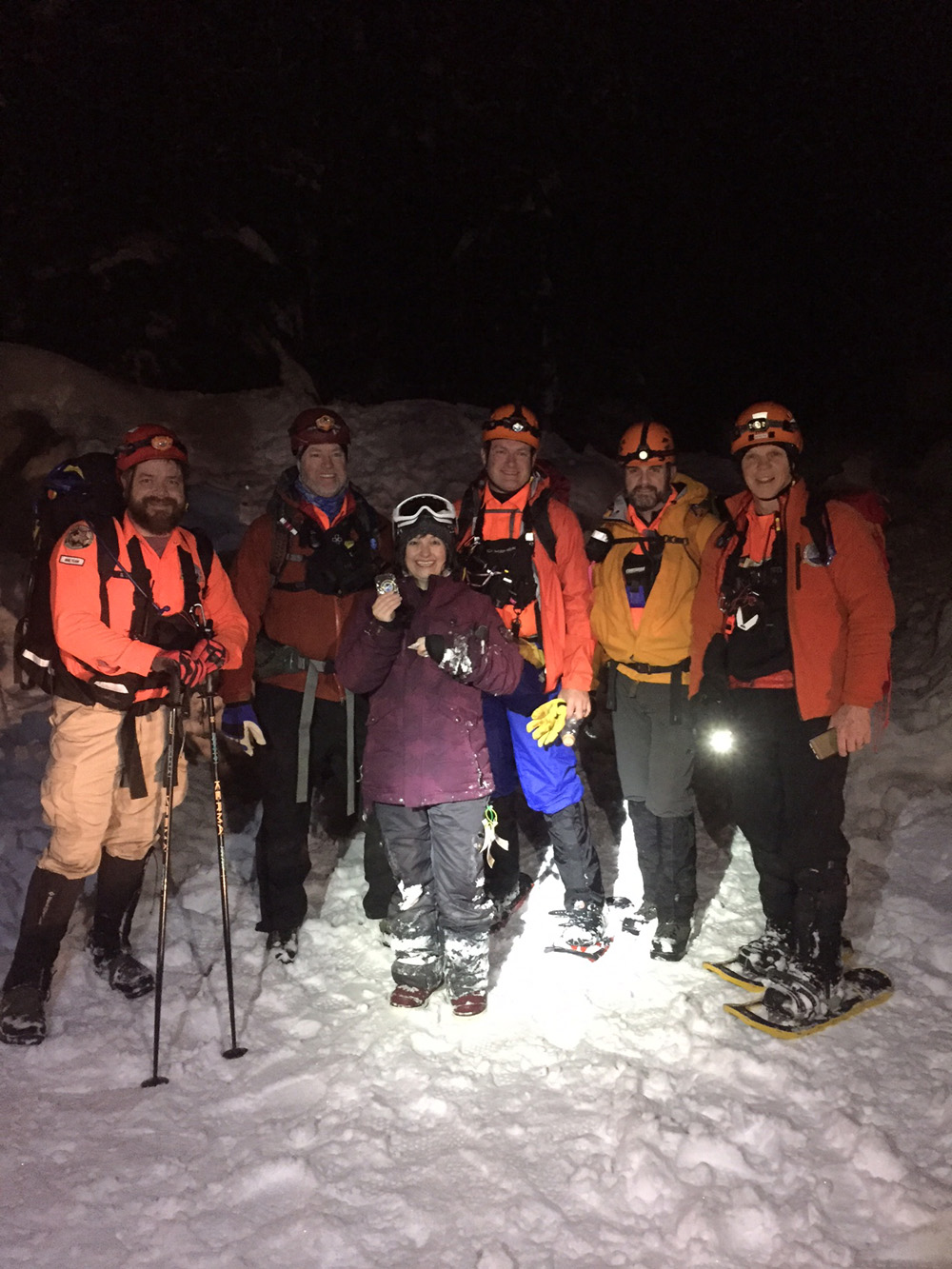 I got a Cliff Bar!

Of course, the first stop was Charlie’s, where friends were stoked to see me alive and well. Joey Bruce kept high fiving me and telling me I’d probably learned a lot of stuff today. So the question remains to be seen. Did I really learn my lesson on going out of bounds?