The Yobeat Race Team Competes at Slash and Berm 5: Last Weekend, Whenever

The Google bots want keywords in the header so here goes: This is a story about the 2018 Slash and Berm Banked Slalom at Killington, Vermont. This two-day event was sponsored by Darkside Snowboards and Whiteflag Sales and benefited the High-Fives foundation. The weekend consisited of an individual race Saturday and an Industry Team event Sunday. As is to be expected from Yobeat, I wrote a story about our team’s journey, as well as a quick review of Torah Bright’s autobiography “It Takes Courage,” which you can read below. And since we snowboarded instead of watching the individual race, please enjoy this non-exclusive gallery from Killington sharp shooter Dave Young!

Torah Bright had already won an Olympic gold medal in halfpipe and established herself as one of the the most progressive and stylish women in the snowboard world, when she decided to do the incomprehensible. She aimed to compete in all three disciplines of snowboarding in the Sochi Olympic games.

“Why?” Everyone asked. “Why on earth would you wanna risk a broken neck in snowboard cross and huck yourself of the sure-to-be-unsafe Russian slopestyle course?”

And that’s not even taking into account the grueling qualification process to earn slots in each of the three events for her motherland of Australia. But Torah’s answer was simple. 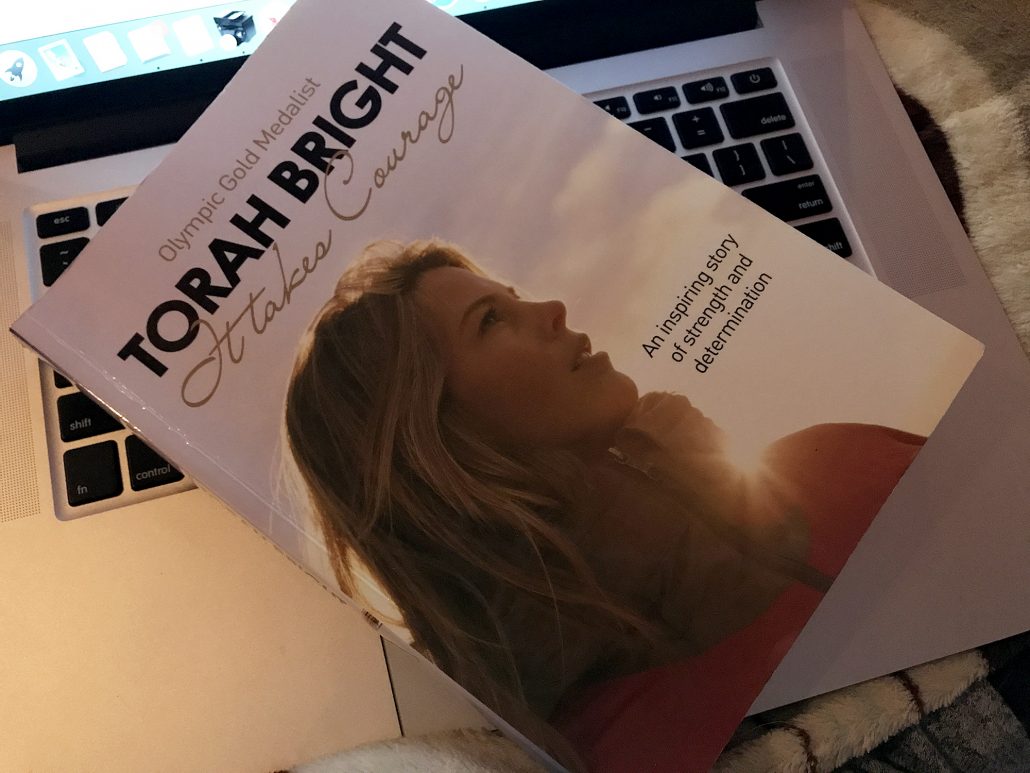 I purchased Torah’s autobiography, written not just about this incredible feat, but also about her childhood, family, religion, career and even her short-lived marriage to Jake Welch “It Takes Courage” in 2015. It’s been sitting idly on my bookshelf since. But with my sights set on the team event at the 5th Slash and Berm Banked Slalom in Killington, Vermont, March 3rd, 2018, I thought, ‘what better way to waste a cross country flight than actually reading it?’

As I sat in the JFK airport watching Winter Storm Riley bare down on the Eastern Seaboard and the departure of my flight to Burlington push further and further back, I lost myself in Torah’s cute Australian phrasing and the quick and easy reading that was her life story. I read each chapter (which she cheekily referred to as Runs) with a much better understanding of what it takes to be a top-level competitive snowboarder (of any gender.) And I smiled and pondered deeply as I read each of the inspirational quotes at the beginning of each “run.”

What I didn’t realize is that when I finally made it to Rutland (8 hours later than I was supposed to) and woke up on Sunday with sore muscles from the recreational shred day with friends I’d enjoyed the previous day at Killington, I would actually need to channel my inner Torah make it down the course that day. In fact, the first thing I did after wiping the sleep from my eyes was text my teammate Jason Bayne. 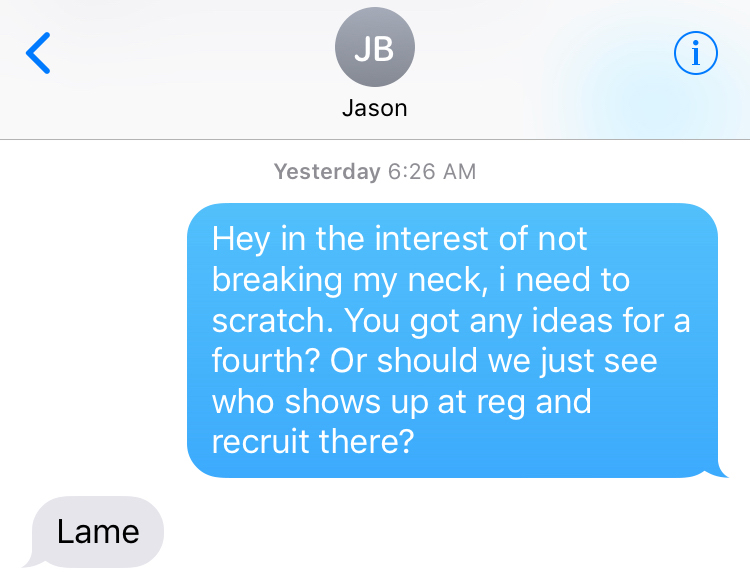 Bayne had been instrumental in helping assemble team Yobeat, and had already recruited Ian Nugent from Darkside Ludlow. Our fourth recruit (teams could exist with three, but since the lowest score would be dropped, that’s just silly) was Colorado-bred eyecandy Patrick Whitehead. Patrick had landed on the East Coast right as I’d posted a plea for team members on Instagram and a few quick texts later had secured his slot. Really, they didn’t even need me, I told myself. And surely there would be someone else that would take over my pre-paid entrance fee to benefit the High-Fives foundation happily, and do a better job.

But nothing resonates with me like the word lame, so I thought about Torah’s book.

“You may be disappointed if you fail, but you are doomed if you don’t try.” — Beverly Sills, Run Six

‘Fuck,’ I thought, as I pulled on my Airblaster ninja suit, and realized I didn’t have a choice. 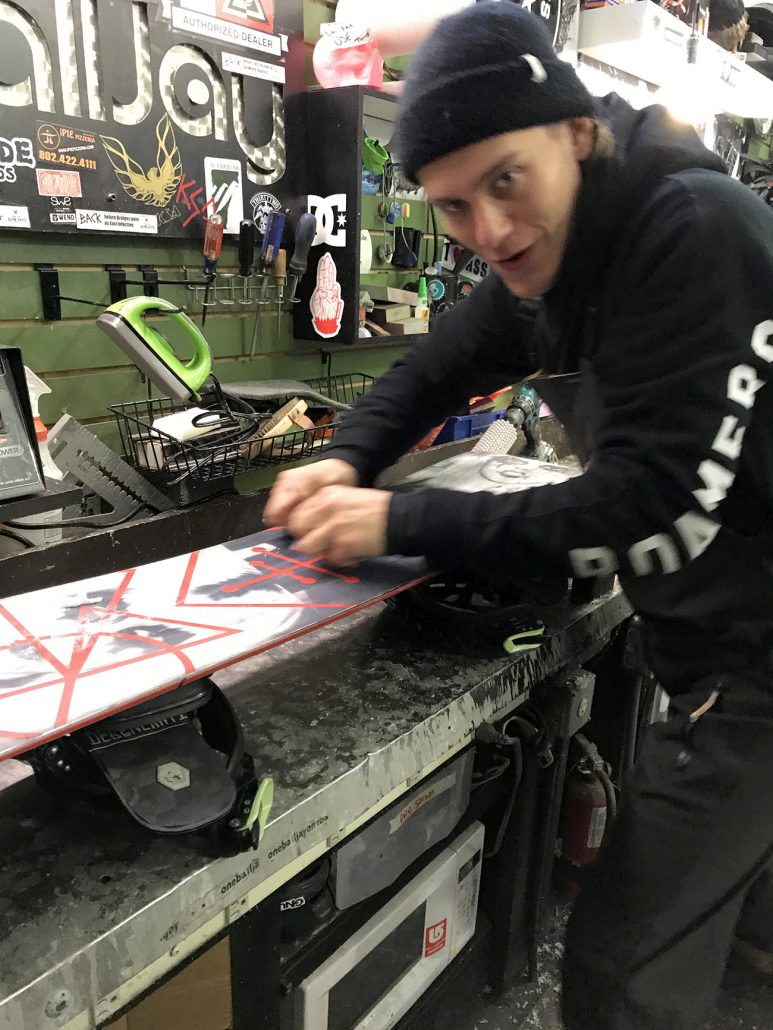 When I arrived at Darkside Killington to pick up my freshly-waxed snowboard, Patrick was in the shop scraping the wax off his board. He smiled and hugged me and thanked me for letting him represent Yobeat that day. I continued to the journey to the Bear Mountain parking lot. With no parking lot attendants in sight, I chose to begin a new row directly perpendicular with the lodge and was happily relieved as our first alternate and waterboy Jim O’Leary pulled in right next to me. The rest of the row filled in quickly and I realized I’d set a trend. This was my calling, to lead the team to victory. Yeah, I probably wouldn’t go the fastest that day, but if I didn’t show up, why would anyone else even want to try?

At registration, Bayne and “Nuuge” had already signed us up and left to go get beer. I carried a 12-pack of CL Smooths in my hand and cracked the top to hand one to Patrick as he put on his bib.

He accepted it and said, “Perfect, I’ll have this right after my runs.”

I shook my head in disappointment. “Please, that’s your warm up beer and liquid courage,” I explained.

“I wish I could drink and snowboard,” he said. “But all I can really do when I drink is drink.”

“Oh Patrick, it’s a dosage thing. One is just right, two is too many.”

“You’re the best coach I’ve ever had, Brooke,” he laughed, as I cracked my own warm up beer and headed out to the lift line.

At the base of the Skye Peak quad I encountered another unforeseen challenge. How to strap in with an open beer in one hand and an open 12-pack in the other? I gently placed one on either end of my first-generation DWD Bogart and figured it out. But as I stood back up, an angry skier lady scolded me.

“You know it’s illegal to bring your own alcohol on government property,” she said.

“Oh sorry, I’m not from here,” I laughed, slamming the rest of the beer and tossing the can in the garbage. She didn’t need to know that I’d grown up here, right?

At the top of the course, energy levels were high. We still had time for a course inspection and I decided in the interest of training, I’d take my first run swaddling the opened 12 pack of beers. I wiggled through the gate and made it through the first two turns, down the staircase, up and over the step up and even managed to figure out there was an easy way around the gator pit. I didn’t go fast, came to a couple complete stops, and I skipped the icy halfpipe wall gate entirely, but me and my 10 silver bullets were in tact when I crossed the finish line. The Killington Parks crew had created a totally manageable course and I didn’t think I was going to die even once. Success! 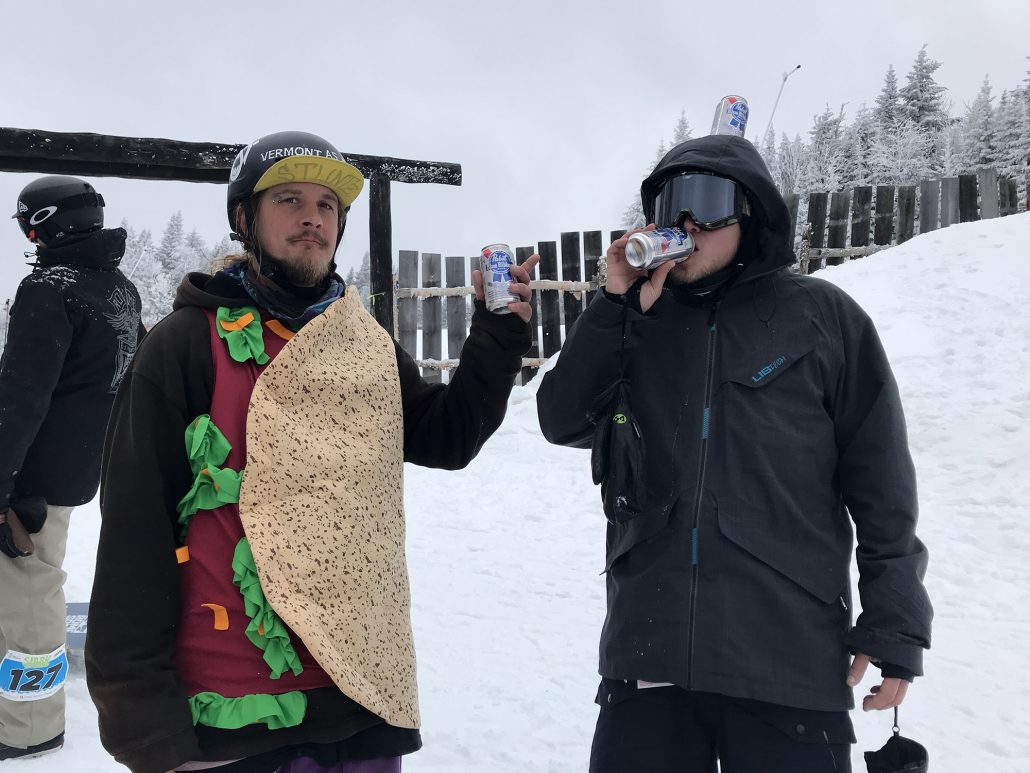 Worried about another encounter Debby Downer in the lift line, I decided to stash six of the beers at the finish line and put the other four in the Kangaroo pouch of my Saga jacket for safe keeping/additional training. I gave one to the finish line attendant to keep an eye on my stash for me and continued on my way.

When it actually came time to race, I discovered my team was a good one. After the first run, Patrick sat in 9th, Ian in 15th and Bayne was in 24th. I held it down with a solid 59th place time (not terrible, considering there were 115 competitors.) The Phat Italian had catered an incredible lunch of sub sandwiches and choosing between the “Phat Italian” and the “Phat Stallion” actually proved to be a much harder decision than forcing myself to compete that day.

Of course, we still had another run to complete and the rapidly firming man-made snow was starting to give way to the classic Eastern Blue Ice you knew was under there the whole time. We took our runs quickly and I’m sad to say, Team Yobeat suffered two rider crashes and a DSQ. Only Patrick was able to improve his time to earn 10th over all.

The winning team was basically unbeatable anyway. Nate Soucey was riding a boardercross board and like, trains for this shit. Ryan “The Crusher” Mrachek and Ryan Flynn are just that good. And their late addition Mike Garceau definitely felt he had something to prove. In second, unable to make it two in a row, was the Darkside Dream Team of Tim Major, Mike Fanning, Tucker Zink and Tucker Speer. They earned it through handwork and gumption. And in third, Team Surf the Earth — Steven Kelly, Connor Waldon, Tim Parker and John Charles — smiled graciously as Darkside Snowboards Manager Tucker Zink handed the representatives of Killington’s other long-standing snowboard shop each a free-tune card to the Darkside.

As for the Yobeat team, we took home a solid 6th, which put us on the first page of the results list and highly satisfied with our performance! Sure, my time was the one that got dropped and sure, they could have done it without me, but damn it, we did it as a team! 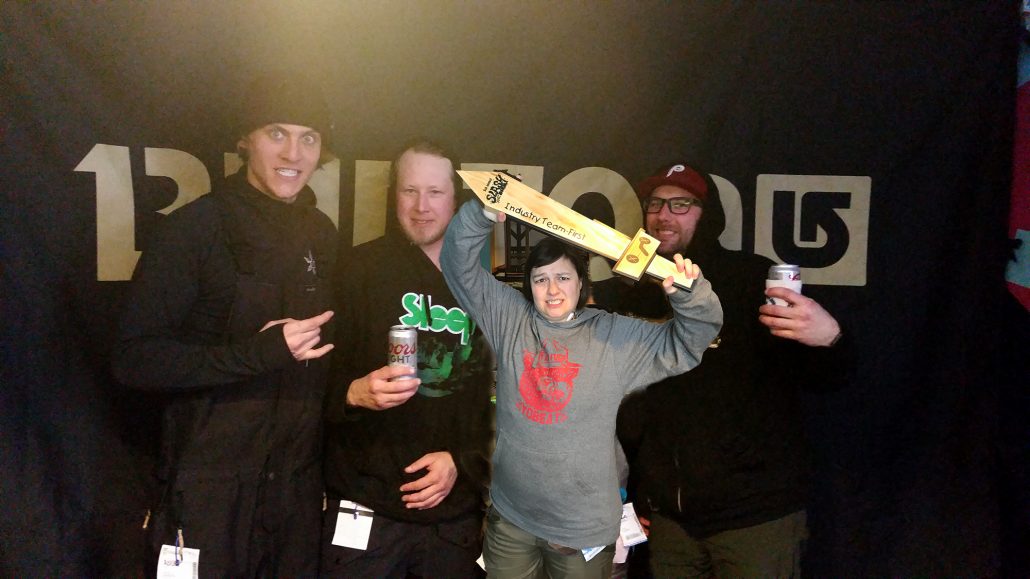