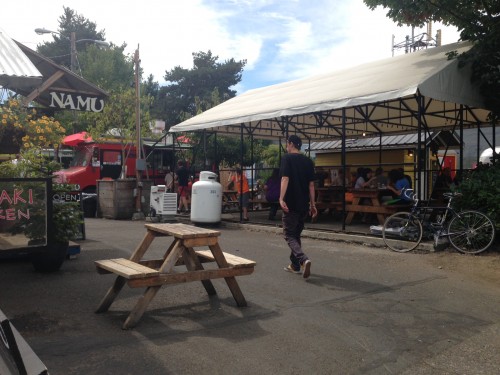 Tucked just off of 39th Ave, I mean, Ceasar Chavez Ave, lies the Good Food Here pod. This aptly-named pod boasts a maze of carts, many of which do indeed serve good food. (Seeing as I’ve only been there once, I didn’t eat at all of them, but we can always assume there’s a dud in the mix when you have anywhere over 5 carts.) Anyway. 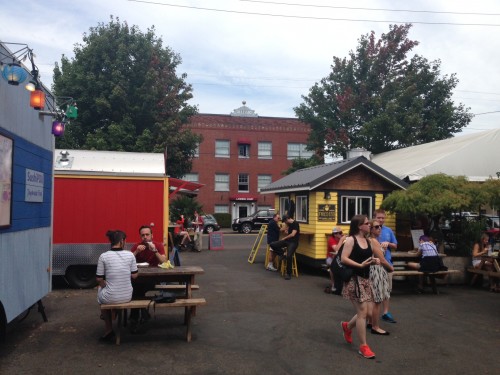 The pod is pretty jam packed with options and in the middle is a covered portico with picnic tables surrounded by foliage. There’s an ATM and the vegetarian cart redeems itself by serving booze. It’s also crowded. On a Wednesday there was a steady flow of traffic and as Stan pointed out “way more hotties” than the previous cart pods. Over all, it’s a little overwhelming, but definitely a decent place to eat a meal.

As for food, I had heard rumor of the Viking Soul Food cart (who knew Vikings had souls?) and it being really, really good, so I went for a Lefse. Lefse’s are Norwegian potato pancakes, super thin, and then filled with all sorts of stuff. I had a special wrap that included chicken, collard greens, tomatoes and garlic-something. There was lots of garlic. As with any food that gets hyped up before I try it I had overly high standards, I was by no means blown away by my meal. It tasted really good, but for $8.50 (including a water cup and the credit card fee) left me a little unsatisfied. Next time, I’d go with the meatball and add some chips or something. 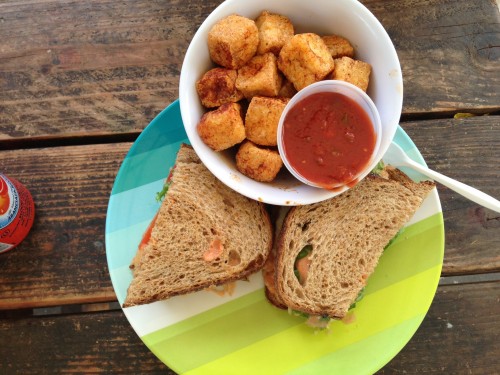 Jared went to Divine Cafe and got a veggie Reuben that looked damn good for being, ya know, vegetarian. He also came back with Tofu tots, which while they looked amazing, actually tasted much like cardboard. I’m not sure if they purveyors of this cart know that potatoes are actually vegetarian and they could make regular tots just as easily that would have been filled more with delicious potato instead of what was basically air. 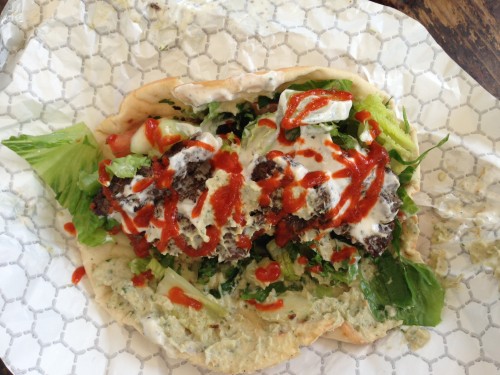 Stan went to the Mediterranean cart, Aybla Grill, as did our friend Kelly and at $5 a pop, both seemed stoked on their purchases. The cart that I’m mostly likely to go back for though is Namu, a combo Korean/Hawaiian spot. Most of the menu is plate lunches and from the pictures they looked damn good. Then when our friend Laura Lynn showed up with the vegan combo and it actually looked good, well, I’m sold on at least trying it. So that said, I’ll certainly return to Good Food Here. 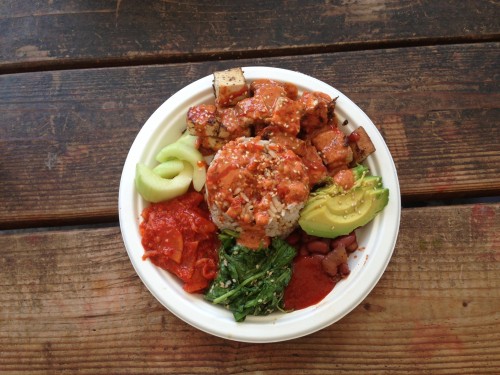