I have recently found myself engaged in a blog battle with photographer Bryan Soderlind. It all started because of a review I wrote about the highly-anticipated wakeskate video Fun Boots! In an attempt to spice things up, I opted to take the angle of how I made my boyfriend wait for action while I watched it, in order to illustrate how excited I was to see this movie.

Bear, as he’s known in the biz, decided to take my moment of vulnerability and run with it, posting this blog on his site. If you don’t want to read, basically he said that I shouldn’t ruin the mystique of lusting after Nick Taylor by telling people I had a boyfriend, but in much more colorful terms. I got a good laugh, commented back, and began plotting my retaliation. Actually, I had no plans to retaliate until inspiration struck. Bear has plenty of mockable attributes, and I felt like I could easily exploit them on my own plethora of blogs. So I crafted this response: 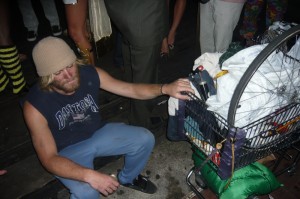 FOR IMMEDIATE RELEASE — Frustrated with the blatant misuse of stimulus money by the banks and insurance giant AIG, the Obama administration has decided to use the allotted bail out funds to keep art alive. The first recipient of a million-dollar bail out is Obscura Staff photographer Bryan “Bear” Soderlind. Mr. Soderlind was chosen for not only his artistry, but as he is the last remaining action sports photographer shooting exclusively film.

Also in consideration for the bail out was snowboard photographer Tim Zimmerman, who was heard saying, “You know what I like about film? Nothing.” Upon being shown Mr. Soderlind’s work, Mr. Zimmerman said, “Ok, that guy is an artist,” and rescinded his proposal.

A white house spokesperson said, “Mr. Obama is a big fan of art, and is actually a casual photographer himself, so it seemed logical that the this bail out would go to a true photographic artist such as Mr. Soderlind. It is also a little known fact that Mr. Obama has a collection of rare Cassette flat decks stored in the Oval office.”

Upon hearing of his selection, Mr. Soderlind announced he was planning to finally embark on the telescopic photography project he’d been planning. “The flight into outerspace was really the biggest hang up, but now with this funding, I’ll be able to show Danny Hampson’s frontside big spins in a way no one has ever seen before!”

Mr. Soderlind has also announced that now that he is rich, he will be giving all of his images to Alliance Wakeskate for free. Alliance Wakeskate editor Brooke Geery was excited by the announcement. “Man, I hope he doesn’t find out that I voted for JAM,” Ms. Geery said.

To really win though, at least one person had to think it was real. And what better way to do that than to post it multiple places with the author “press release.” Luckily, I have access to both Alliance sites, so that was a snap. However getting it posted on the other wake sites has proved more challenging. Judging by the person who posts to Wakeskating.com’s main page’s reaction: “ I want that 30 seconds of my life back…” that was a total no go. The editor of Wakeboarding Mag wrote back, “prob not gonna get in the middle of your cyber-battle, but that was funny….” And crickets from the camp at Wakeworld. At least the guys at LaSewer thought it was funny (well, one of them anyway.)

But I still feel like I won. I was even acknowledged by Danny Hampson on the very site Bear himself wrote his blog on. So Bear, the ball is back in your court. There is plenty of fodder out on this here Interweb for you to play with. Take your best shot!