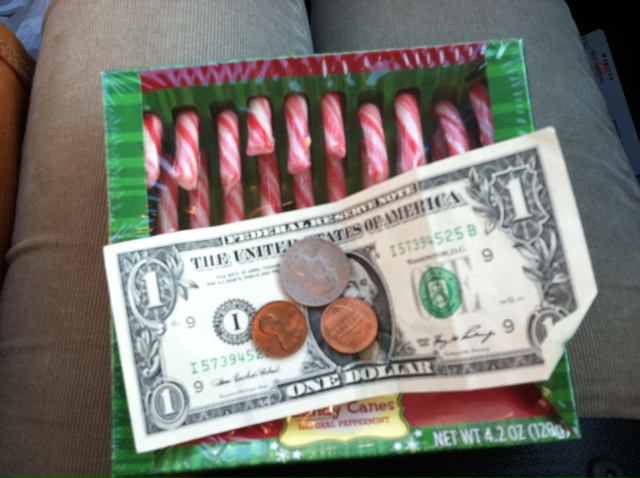 I’m back east for a week, which is exciting for the couponer in me because there are CVS’s everywhere. For whatever reason, we don’t have CVS in Portland, and so I am forced to miss out on the deals there week after week. But on a stop for gas somewhere in Southern New Hampshire, I found myself sitting next to a CVS that was just begging me to come in.

With some quick internet research on my phone I found a couple money-making deals that seemed worth doing, but much like I haven’t been blogging, I haven’t really been keeping up on my clipping and organizing, so I was missing most of the necessary coupons. I did, however, see a deal for what were basically free candy canes, and who doesn’t like free candy, so I went in to see if I could pull it off.

Basically for $1.27, you got a box of candy canes, and received a $1.27 extra bucks reward, making them free. Except, I had to get a CVS card, and when she rang in my order, the extra bucks didn’t print. Because it was a new card she couldn’t just issue them after the fact so, long story short, the manager came over and handed me $1.27 cash. Which I’d say is a wicked good deal.

I might try out Price Chopper or Hannaford while I’m here and stock up my parents on a bunch of crap they don’t really need. Or I might just enjoy my candy canes and call it good.