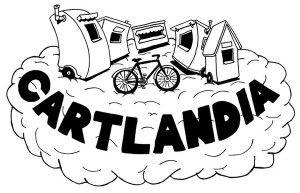 Despite it’s adorable kitschy name, Cartlandia is about the least “Portlandlandia” place in Portland. Yes, it claims “bike-centric” and is on the Springwater Corridor — a Portland-y bike path lined with wild blackberries– but the PDX stereotypes end there. There are tons of carts, but this must be the cheapest place to rent space in Portland, because is seems it’s mostly people who probably shouldn’t own restaurants and are just “trying it out.” Some I’ve tried are fine, but certainly not food you’d drool over and want to seek out again.

My biggest issue with this place is the sheer number of carts. I NEVER know what I want for lunch (hence the Lunch blog – it was supposed to provide direction) so I’ve already suffered with one decision by the time I make it to Cartlandia. Then I get there and have to decide all over again. To make matters worse, there’s always new carts which means I have to walk by awkwardly and try and look at the menu without actually talking to people. (For some reason I feel bad when I don’t get their food if I’ve spoken to them, ok.)

As far as genres go, like you’d expect on 82nd ave, there are a bunch of Thai places. There’s also a few carts representing various Central American countries, and at one point there were two Hot Dog carts. There’s a crepe and wrap place, and pizza. There’s also a sloppy cart that I’ve never seen open. Oh and there’s a British Pastys cart that I almost forgot about. I’m just not interested in bready English food, sorry. Anyway, it changes a bunch so for the current list go here.

Anyway, once that is taken care of and I get food, the atmosphere feels much like the county fair. I mean, I don’t really know what else I’d expect from a cart pod on 82nd. They have a beer garden with giant blaring TVs, you’re sitting in a shitty parking lot surrounded by like shady car mechanics, and there are tons of tables full of normal, non-hip people eating with the occasional tweaker mountain biker thrown in for good measure. Finally, with so many carts, the whole place smells like fried food.

My hope is that it will get better, as now that I am an 82nd aver, I’m cheering for urban sprawl and redevelopment. According to the Cartlandia blog they just cleared out 7 new spaces maybe someone will put an epic cart in there, but for right now, Cartlandia is kind of a bummer. Oh shit, I just came up with the best idea! Maybe they should start hosting Bingo there, really play off the fair theme! I heard that’s getting hip again on the news, which is where I learn about everything hip, so it could work to be the tipping point for 82nd. Just an idea.