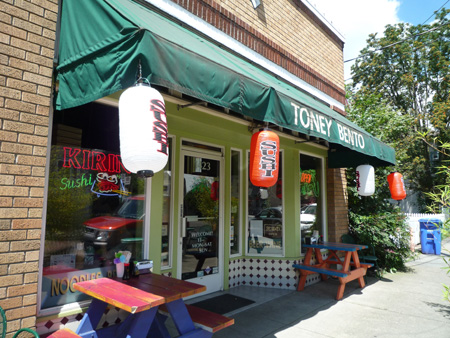 Our “new” options on Hawthorne are limited, so there have been a lot of trips to the same old places lately, but yesterday we finally decided to get back on blog-wagon and try out something new. Toney Bento is tucked just off the strip on 37th, and is one of the few places left on our list that isn’t a dingy-looking sports bar. In fact, it looks quite appealing and even has sweet samurai swords on display. How can you go wrong with swords!? Despite the name, there is also more on the menu than bento, specifically a sushi bar. The menu is quite long in fact, and after staring at it for awhile I finally opted for one of the many combo meals.

A decent value at around $8, the Hawaiian combro included a spicy shrimp roll, a giant bowl of udon miso soup and a salad. On the other side of the table Jared went with the Vegan combo: an avocado roll, pot stickers, rice, salad, and a small bowl of miso. Seemed safe enough. As usual, Jared didn’t have much to say, this time blaming the food for being “too basic” for him to formulate a real opinion on the place. But I have no problem forming an opinion, so here goes.

The soup come out first and started things off well. It was simple udon noodles in regular miso, and was actually quite tasty. Unfortunately though, it would be the highlight of my meal. The shrimp roll was made with pre-cooked (and probably previously frozen) shrimp meat and if the sauce it was in was spicy, I couldn’t tell. There was also avocado and cucumber, but overall, it tasted no better than the stuff you get in the grocery store: like it had been made and then refrigerated for hours, if not days. The salad was also a miss for me. Basically just chopped napa cabbage in sweetened rice vinegar with a garnish of carrots and black celery seeds, it was not particularly good as far as consistency or flavor were concerned.

Overall, Toney Bento proved to be a place I would have been fine with never eating at (but at least it didn’t make me sick, or anything!) I think the lesson here is when a place has “bento” in the name, probably best to stick with chicken terriyaki.