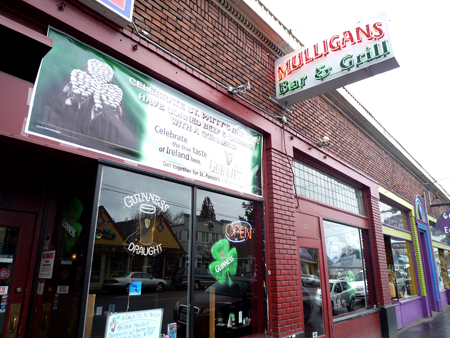 Since it’s getting close to St. Patrick’s day, it seems fitting we’d finally make it to Mulligan’s, although, the impending holiday actually has nothing to do with why we went there. A combination of attempting to be less fat and attempting not to spend so much money has slowed the lunch blogging, but there are a few places still to cross off. Mulligan’s was one of them.

We showed up promptly at noon and were officially the only customers in there. The bar is big, with a couple pool tables, and apparently on Thursday it’s happy hour all day. Unfortunately for us, the Happy Hour food didn’t start until 4, so we were left with the regular menu. In a decision that definitely was not going to help my “diet,” I ordered a turkey bacon and avocado sandwich with a heaping pile of french fries. It was available either hot or cold, and upon the waitress’s suggesting I got it hot, or essentially “grilled.” It was indeed “melty” as she described and pretty damn good. I officially ate one half of it and still feel like I may have gained a pound, or three.

Jared’s options were limited, but who are we kidding, he would have gotten a veggie burger either way. It came with plenty of toppings and although his first review was “it’s a garden burger” he later added that it was a good veggie burger, especially thanks to the bun. Fries were plentiful and pretty tasty, and over all, it was a solid meal of indulgent bar food. However, as we didn’t eat our meal with a side of Guiness, we somewhat failed this place. What can you do?