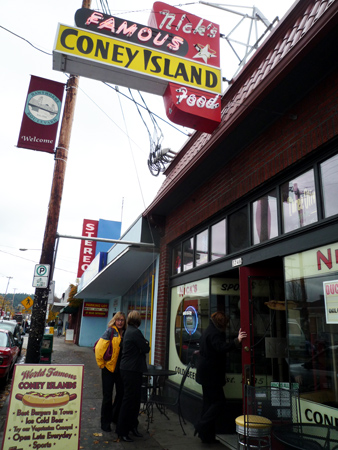 We’d actually tried Nick’s shortly before embarking on this blog project, and being honest, our review then wasn’t good. I’d gotten a burger, because the A Frame outside says “Best Burgers in Town” explicitly and I felt obligated to test it out. Jared got a veggie coney and we both had the mac salad because that day the fryer happened to be broken. We both found ourselves incredible underwhelmed, and never planning to return.

But as we now make all lunch-related decisions by this blog, and Nick’s Famous Coney Island is one of those staple-type places on Hawthorne, it seemed we’d have to give it another shot. I had a great plan: I was going to get a Coney and Jared could get a veggie burger or something else since his in his first experience the veggie coney was more like a “mushy pile of fake meat” than he wanted. It was brilliant really.

On this visit, the fryer was definitely working, and you could smell it the second you walked in the door. Things were looking better already. But when we looked at the menu, poor Jared realized the veggie coney was actually the only veggie option on the menu, so he was stuck getting it again. We ended up with two coneys (one meaty, one not) and both subbed fries for the extra buck. This time the verdict was better, mostly because of the fries. They were awesome. Crispy and simple, just a light sprinkling of Lawry’s (or something similar.) As for the Coney, mine wasn’t bad, but it was definitely junk food (right down to the slice of American cheese.) The “coney” sauce was a little boring, and I ended up with a ton extra on my plate after I’d eaten away the bun and hot dog. Jared’s review was similar, but he agreed the fries made everything better.

I suppose if you are in the mood for a coney, Nick’s is your place. The NYC/baseball theme is cool if you are into that sort of thing and service and prices are reasonable. Personally, I think I’ll go back to Zach’s Shack next time I want a hot dog for lunch.

Veggie Options: Officially one choice (two if you count a plain veggie dog)