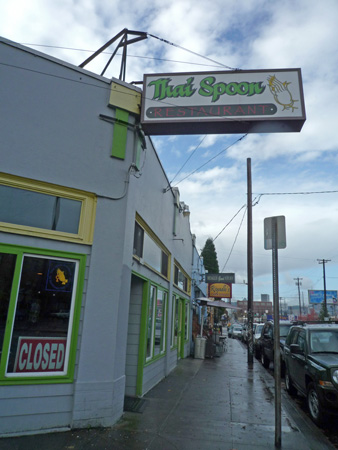 If there is one thing Portland does not have a shortage of it’s Thai restaurants. There are at least 5 I can think of off the top of my head on Hawthorne alone, and for that reason, we’d never tried Thai Spoon before. But whenever it’s my turn to drive (yes, we drive to lunch every day and we’ve both driven to the office so we always fight over who has to drive that day) I always pick a place that’s as close as possible. Don’t tell Jared about this, since when he drives we usually end up on places past 39th. Anyway, enough of that tangent, back to Thai Spoon.

The lunch menu looked pretty standard: curries, noodle dishes, stir-fried items. The menu specified all items came with a veggie egg roll, and the non-noodle dishes with white rice. Most items were $6.95, with a few costing $7.75. So far, so good. I went with the Pad Kee Mao, a.k.a Drunken Noodles a.k.a. Spicy Noodles. I don’t really understand why this dish has so many names, but I do know it tastes good. Jared got the red curry with tofu.

As we waited for our food to come, I tried to explain to Jared that normal people actually talk at lunch, instead of posting pictures on twitter and then telling the other person to check them out. We were both glued to our phones when a nice surprise showed up: a starter salad. Super basic — just iceberg lettuce, carrots and some crispy wontons with peanut dressing — it almost instantly won me over.

When our entrees came I remained pleased. The egg roll was super skinny and somewhat resembled a cigar, but perfectly crisp and a nice addition to my noodles. Both the curry and the noodles we’re appropriately spicy. I ordered mine mild and it still had a nice, but not overwhelming kick, and Jared, who is tougher than me, asked for more kick and got it, but said it wasn’t inedible at all. All the ingredients were good and in a decent ratio, and I honestly have no complaints about this place. They were even playing cheesy pop music (Ace of Base anyone?!)