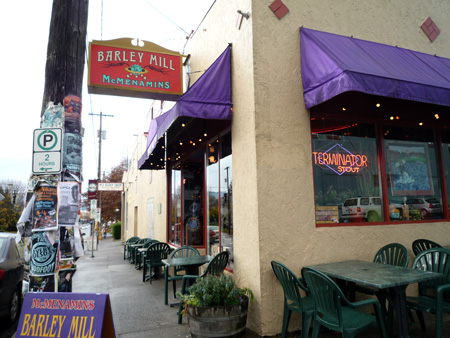 The Barley Mill is the oldest McMenamins pub in Portland, and if you’ve been to one McMenamins, you pretty much know what to expect. Pub food and good beer served up in whatever kitschy theme that location happens to be dedicated to. The theme here is the Greatful Dead, and the walls and even ceiling are covered with brightly colored junk of that ilk, but I tried not to hold that against them. When you really start to pay attention, there are subtle differences in the menus and offerings at each location, and as it turns out, Barley Mill is actually very well catered towards the midday meal.

Missing from the menu are the heartier (and more expensive) pasta dishes, as well as pizza. Instead there is a plethora of sandwich, wrap and burger options not found at every other location. So basically, tons of lunch food, not so much for dinner. Another perk of this place, especially over the nearby by Bagdad, is the service. At least on our visits it has always been good. It seems more adequately staffed overall, and we literally had two servers doting on us the whole time, replacing our drinks without having to ask, etc.

I went with the Tequilla lime chicken sandwich, mostly because if you put avocado on a sandwich I am going to order it. I wasn’t disappointed: tender chicken, avocado, lettuce, tomato, tons of melted cheddar cheese and spicy mayo. They did load up the red onions, which I as usual, opted to pick off. It was a bit messy, but overall good, and they were kind enough to provide a sharp knife with all the burgers so you could cut them in half. Another point scored for Barley Mill.

Jared felt bad ordering his usual, a communication breakdown burger, since we already covered that, and went with a standard Beer Garden Burger instead. I just asked for his review, and he said, “It was a good veggie burger, better than just a plain garden burger. And the size was ample.” Profound really.

So there you have it. 20-plus years on the corner of 17th and Hawthorne, The Barley Mill must be doing something right and we were not let down.

Speed: Faster than the Bagdad

Veggie options: Several sandwiches and any burger can be made veggie