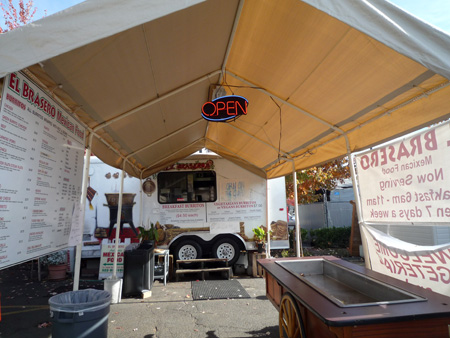 I don’t particularly like to eat outside. I hate eating outside. I don’t care about the autumn breeze. In fact, that’s part of why I hate it. My ungroomed, overly long hair ends up in my face, and there’s no telling what’s going to land in your food next. I tend to leave picnics to the birds, but that’s just me.

Now that we’ve gotten that part out of the way, today was likely one of the last “nice” days of the fall/winter season, and we figured hitting up Hawthorne’s cart pods was best done in the sun.  There is some cover at the carts, but I can imagine a rainy day being rather moist beneath the canopies. For more on the overall “what’s offered at the carts” check out Brooke’s previous post, on what she ate. We each went to different carts, so I’ll focus my saltiness on my choice, El Brasero, or “the Mexican one.”

The nice thing about food carts is they’re typically cheap, for (in Portland at least) the amazing food you get. Some of them send you off with two meals worth of eats for around $5 (India Chaat House downtown comes to mind). But the carts on Hawthorne aren’t quite as cheap. This pod caters mostly to the late night bar crowd (some, like the popular Whiffies, don’t even open ’til the evening hours), and under those conditions your judgement can be, well, clouded. That’s not to say the food wasn’t good. The vegetarian burrito I got at El Brasero was actually really good for what it was (rice, beans, cheese, lettuce, tomato). But at $7 for the burrito alone, I felt like I could have had a roof over my head. A canopy seems more like a $4-$5 burrito covering.

El Brasero did have a nice variety of vegetarian options, and it was a good burrito. The tortilla was particularly good. But $9 for the burrito and Jarritos soda was a bit too Manhattan in price.

Would I go back? I wouldn’t go out of my way like I would say, Los Gorditos, but the burrito was good, so I wouldn’t run for the hills. 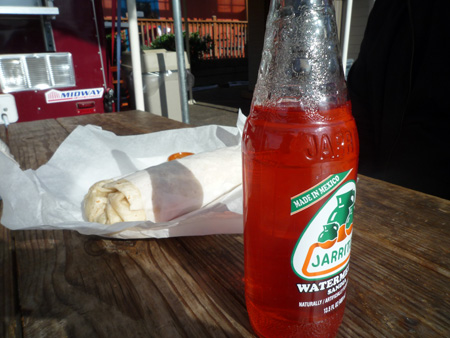