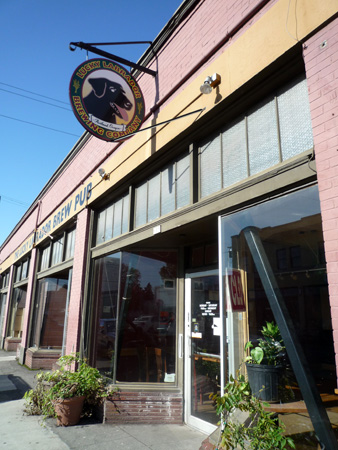 With all of our Hawthorning, this week we decided to mix it up a little bit. So on Monday, after staring at each other for a bit trying to decide where else we should go, we eventually gave up and drove towards Hawthorne. But as we got close, brilliance struck! We decided to go the OTHER WAY, and see what 1st through 10th aves had to offered. As it turns out, not too much. One seedy looking bar, one seedy looking strip club and the Lucky Labrador Brew Pub. Since I wasn’t in the mood for a greasy burger and boobs, Lucky Lab it was.

From the outside it almost looked closed, as the main seating area is down a hallway in the back. Inside it’s basically a giant hall with tables and a bar, from which you walk up and order food and beer. We were there on a Monday, which happens to be “Miser Monday,” featuring a dollar-off pints. I resisted lunch beers though cause I had work to do, and went with an iced tea instead.

Since the menu board didn’t specify what the sandwiches came with, we started with an order of chips and salsa, just to be safe. (As it turns out, all the sandwiches come with your choice of potato chips or tortilla chips.) Though obviously store bought, the chips were good and salty. The pico they came with was ok, but kind of tasted like the stuff you get in a tub in the refridgerated section of the grocery store. It could have been housemade, but just old…They did grab the chips for us right away though, which was nice.

Sandwiches were delivered to our table after a few minutes. Jared went with the Super Spy, which is Spicy Cream Cheese, Cucumber, Lettuce & Tomato on a Ciabatta Bun. His review: “Spicy, as advertised.” I got the half sandwich soup combo with a tuna melt and tortilla soup. Tortilla soup is one of those things that I always order, and then realize that I don’t really like. Well, I should say that. I have had two versions of it that I absolutely loved (both from Mexican restaurants) but I need to stop ordering it from American spots. It sort or reminded me of watered-down chili with tough chunks of chicken in it. The Tuna Melt, however, was awesome. Super simple, italian bread, melty swiss cheese, tomato slices, and good tuna. I definitely will just go for the full one if we go back.

Overall, Lucky Lab was good and fairly affordable. I think next time I go will be on a day I really need a lunch beer though!