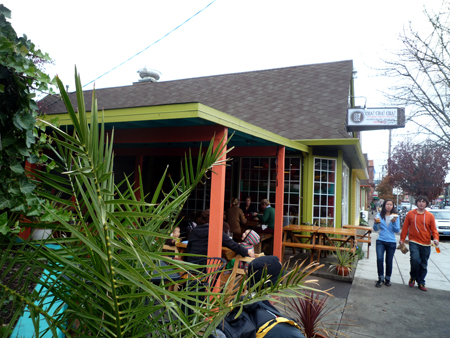 Cha Cha Cha is the best local baja-style Mexican chain around. Specific enough for you? Ok, so it’s the only place that fits all those criteria. But it is pretty good; sort of like a local Baja Fresh with better, more sustainable ingredients and an ever-changing menu.

Obviously there is no shortage of Mexican restaurants on Hawthorne, but there are a few reasons to hit up Cha Cha Cha instead of the others. The menu is quite extensive, it’s fairly reasonably priced, and as I’ve already mentioned, the ingredients change with the season. There is also a sizable, covered outdoor patio, great in the summer months.

On this visit, as usual, we started with chips and salsa. The chips are house made and the salsa is super fresh pico de gallo (in fact, I’ve seen them dicing it up in the open kitchens.) Unfortunately, an order does run ya a couple bucks, but what can you do.

For entrees, I went with the enchiladas verde plate, which comes with rice and beans. I am not typically a big fan of enchiladas, mostly because the sauce tastes like burnt chili to me, but the green sauce used on these is awesome. And they come with a heaping portion of guacamole. My only real complaint is that the enchiladas themselves are tiny, basically just one taco-sized corn tortilla filled with chicken for each, and I usually feel like I could easily put down two more.

The always-adventurous Jared broke out of his bean, cheese and rice burrito box and went with a special, the chipotle tofu burrito. I asked him what it tasted like and he answered, “Chipotle tofu.” Helpful, right? Eventually I got out of him that he liked that it included spinach and was better than his usual order.

Cha Cha Cha has a couple locations around Portland and while it’s by no means authentic Mexican, it’s definitely good if you are in the mood for baja-style food. I should note however, that I’ve heard a few people complain it is “hit or miss” (I’ve always been happy) so if you have a bad experience, you shouldn’t write it off completely!

Speed: This is one of those places where it says right on the menu “we make your food fresh so it may take longer” but it’s still relatively quick