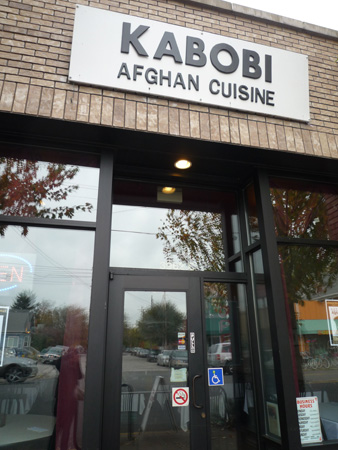 It’s official: we need to stop bombing Afghanistan. Not only because it doesn’t seem to be making a damn difference, but because after my first experience with Afghani cuisine at Kabobi, I must say the food is damn good. I had no idea what to expect walking into Kabobi (other than that they had a $5.95 lunch special, thanks to an outdoor a frame.) We’d actually been curious about this place before, but never went in, in case Afghani food was like chicken feet or something. Well, as it turns out, it’s basically Indian Food. Same curry/chutney-style flavors, served with basmati rice and naan.

As it turned out the advertised lunch special wasn’t all it was cracked up to be: it was only a few fully-vegetarian options, which were not served with rice, only a side of naan. For that reason, both Jared and I ordered off the main lunch menu. I got chicken kabobs, served with regular rice, and Jared went for the vegetarian sampler, three small items with regular rice. Both were a bit more expensive, but not outlandish at about $8 each. They did not, however, come with nan and we failed to order a side of it.

While we waited we were invited to help ourselves to hot chai tea, which is a favorite of mine, and the waiter made some friendly conversation. Of course, spare one other take-out customer, we were the only people in there, but it was nice to be acknowledged.

The food came, and the waiter explained each item as we’d told him it was our first Afghani food experience. Jared’s three dishes were chick peas, green peas and spinach in various sauces. I am not going to pretend to know every ingredient but I tried them all and damn, they were good. I especially liked the light, sweet green pea dish. Yum. My plate was filled with rice and tender chunks of well seasoned chicken, garnished with pickled onions. I dribbled on some of the chutney left on the table which added a nice sourness to it. My food was good, but I honestly found myself jealous of Jared’s vegetable medley since it was a bit more interesting (a first for sure.)

All in all, a good meal, and good to know about, since due to the departure of India Oven, there’s no actual Indian food on Hawthorne.

Veggie options: yes, and the “lunch special” is only vegetarian options