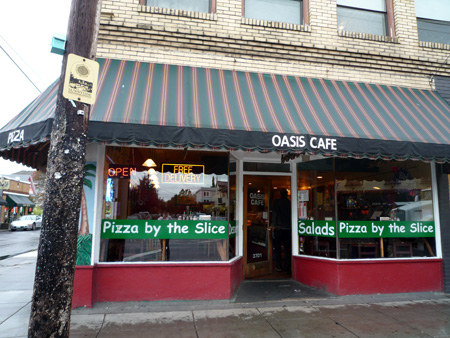 I was trying to decide what makes a slice of pizza perfect for me and I realized I don’t know. It’s just the sort of thing where you bite into and say, damn this is a great slice of pizza. But like everything in life, it’s going to be different for everyone. And honestly, I don’t even really like pizza that much. Call me un-American, but rarely when we head off for lunch do I say, I really want a slice of pizza right now! But unfortunately for me, there are two people on this blog venture, and the other one really likes pizza. Add to that there are several pizza places on Hawthorne, and I am pretty much screwed.

So today we hit up Oasis Cafe. This place actually came highly recommended, and I decided I could satisfy my lack or urge for pizza by getting a sandwich instead. One cool feature about Oasis is the giant windows overlooking Hawthorne. You could sit in them and entertain yourself hours watching oddly-dressed humans walk down Hawthorne. As for the food though, it’s either grab pizza by the slice or order something off the menu.

Jared got two slices, a cheese and a special veggie with tomatoes, basil and feta. Unlike the other two pizza places we’ve tried, the crust is thick, almost sicilian-style, and rather than reheating them in the oven when you order, they pull them from under the heat lamp and slap ’em in front of you on the counter. Jared said he actually prefers not having them reheated, but if you ask me, it just made for soggy crust.

As I had planned, I ordered a sandwich, the Paisano. The ingredient list read: proscuitto, roasted red peppers, mushrooms, mozzarella, garlic-infused olive oil, which sounded pretty damn good. After about 10 minutes (and Jared had polished off both his slices) it came out piping hot. The menu said it was served on foccacia, so I guess I shouldn’t be surprised that the fillings were basically sandwiched between two slices of dry, over-cooked pizza crust. It was also served with store-bought tortilla chips and a plastic cup of whatever brand of salsa must have been on sale that week.

I have left a few new places a bit unimpressed, but I have yet to be so bummed on a meal as I was at Oasis. I made it through about half of the sandwich before just giving up. I can see if you wanted to grab a quick slice and have entertainment while you eat, this could be a cool place. But as far as an actually good lunch spot, sorry, this was not it.

Speed: For slices, really fast, but the sandwich took its sweet ass time