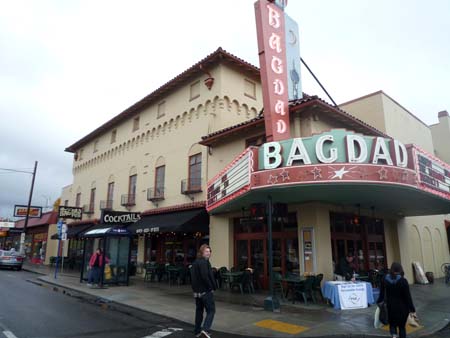 Today was the final day of our goal within a goal of the 4600 block of Hawthorne, but as we drove towards Thai Thai, we passed the Bagdad Pub. Seeing the big windows filled with happy dinners enjoying their microbrews on a miserable, rainy Portland day made me realize: I wanted a lunch beer! So we turned the car around and headed back to Bagdad, one of two McMenamin’s options on Hawthorne Bvld.

The Bagdad (they spell it wrong, not me) is part of the chain of Portland restaurants famous for repurposing old buildings into casual pubs with a twist. This location is a movie theater in addition to a restaurant/bar. As with all McMenamin’s it offers house brews and basic pub fare. While all of the locations offer a slightly different menu, the gist is the same: burgers, sandwiches and a few more entree-style options.

I almost always get the same thing at Bagdad for lunch: a half a tuna sandwich with tots. At $4.60 it’s an amazing deal and the perfect amount of food for lunch. So today, I ordered it as usual, and didn’t notice the server (who didn’t bother to write down our order) had actually brought me a turkey sandwich instead, until I actually picked it up to take a bite. Now I have worked at enough restaurants that I really don’t let stuff like this bother me, so instead of complaining, I just ate it. I must say, the cranberry sauce made it something special, and honestly, I might just switch things up to the turkey sandwich from now on, and that’s not just the lunch beer talking.

Jared went with a communication breakdown burger, veggie-ized. That’s a burger with cheddar, onions and peppers, and having had it in the past (but with real meat), I can vogue for it’s quality. In fact, all of the burgers I’ve ever had at McMenamin’s have been good. As pub food goes, they’ve got it down. Eventually we’ll make it back to The Barley Mill, actually the oldest McMenamin’s pub, also on Hawthorne, but for today, Bagdad was pretty much perfect.

Veggie options: Burgers are good here and any one is available with your choice of two veggie patties.

Speed: Generally understaffed (one server/bartender for the whole place at prime lunch time) so not the fastest.