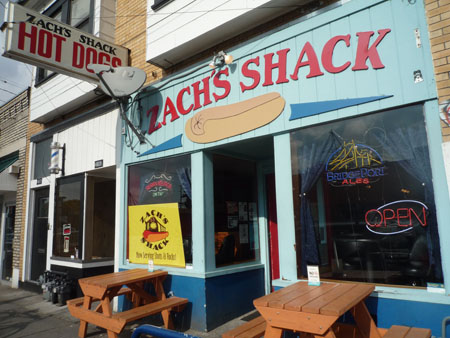 Today we realized the 4600 Block of Hawthorne may just be the ultimate lunch utopia. We originally set out to eat at Por Que No (more for review purposes than because we wanted to) but were distracted by the neighboring Zach’s Shack and the East Side Deli. Also on this block is Dingo’s (where this whole project started), Toji Korea Grill House, Thai Thai and Angelo’s (which I’m a little scared of.) So for this week we’ve got a goal within a goal: eat at all of these places. Ok, so it will actually take a week and a half, but you get the point. Today we opted for hot dogs at Zach’s Shack.

Hot dogs, when not gotten from a cart, seem like sort of a weird thing to eat out for to me. Realistically it’s one of those things that even a helpless bachelor can make at home! But that said, Zach’s Shack is a definite favorite lunch spot. It’s cheap and it’s good and sometimes a hot dog with all the fixin’s is worth going out for.

I’ve always gotten the Chicago dog (tomato, onions, relish, pickle, mustard, celery salt, hold the hot peppers) with the classic all-beef hot dog. You can also get a turkey dog or veggie dog at no charge, or sausage for a little bit extra. Today Jared went with a veggie Chicago dog as well as a Greatful dog (cucumber, tomato, onions, celery salt) cause he has a man-sized appetite. One order of regular fries between the two of us (which was more than enough), drinks, and Zach’s Shack still came in well under my $10 per person limit.

Everything about these hot dogs is good. The buns are soft and big enough to hold every together without falling apart. The beef hot dogs have an almost-crisp casing due to the steaming process (which explains the “hot dogs with a snap” thing.) And the fries are your classic crinkle cut, lightly salty and perfectly simple. The ambiance in Zach’s is the only thing sort of lacking, that is, unless you really like dive bars, but other than that it gets a thumbs up. That’s why Zach’s probably beat out Por Que No today, but we’ll get there soon.

Veggie options: Yes, and no extra charge to sub a veggie dog.

Speed: Faster if you don’t have a damn vegetarian in the mix, as the special order takes 3 extra minutes. But still fast overall.