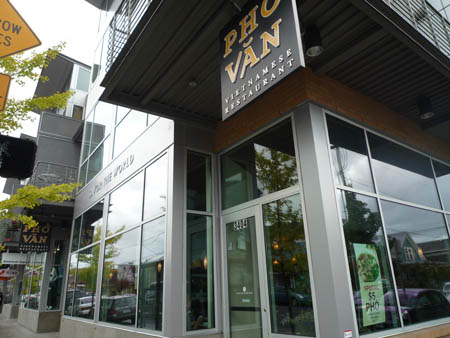 Though we’ve been to Pho Van’s 82nd Ave location many times, this was the first visit to the somewhat more swank Hawthorne location. On the corner of 34th and Hawthorne, the booths here are divided by ornate woodwork, and the light fixtures are especially awesome, but this is a food blog, not about interior design. And since I’ve been to another Pho Van location, I knew what to expect in terms of food quality. The real test was the ambiance, and of course, the lunch specials.

Ironically, Pho Van seems to have an anti-lunch special. $5 Pho from 11am-12 and then again from 3-5, in other words, not during the prime lunch hours. I guess it’s understandable, as the restaurant during the noon hour was packed, and at first I thought we may actually have to wait to be seated. Luckily there was one giant booth waiting for us and we were seated quickly.

We started with Veggie salad rolls, which would have been better with shrimp, but that’s our fault, not the restaurant’s. For the main course, I went with the usual, Pho Ga, or as I like to order it, chicken noodle soup. What can I say, I am from New England, we don’t even have Asian restaurants… Pho Van doesn’t offer a Veggie pho, so Jared went with a chef’s vegetarian special consisting of wide rice noodles, tofu and vegetables. The tofu was cut like crinkle cut fries which seemed odd to me, but Jared seemed to enjoy his meal. The Pho, which luckily comes in two sizes (I got small and couldn’t finish it), was delicious as expected with light and dark meat chicken and plenty of fresh veggies to mix in.

Then the bill came. The issue with Vietnamese food is you can get the very best versions of it at the dirtiest places, for dirt cheap. But at Pho Van you are definitely paying to sit in a nice place. $26 for both of us, not outrageous, but certainly not cheap, especially considering neither of us got drinks. But overall, Pho Van gets a thumbs up.  I think I’m definitely more likely to hit up the one on 82nd though; it has more seating and it’s own parking lot!

Speed: Food was quick, but overall service was slow