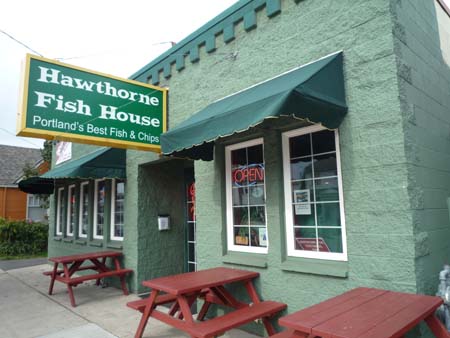 On a cold, stormy Portland day I wanted something hearty and wholesome, so I figured fish and chips would be just the ticket. So we headed to Hawthorne Fish House, just for the halibut. No wait, because we cod. Ahahahahaha. Ok, I’m done now.

The sign on Hawthorne Fish House (sister location to Corbett Fish House on the west side) says “Portland’s Best Fish and Chips.” Now this isn’t a small claim, since this city is filled with amazing food. To say you have the BEST of anything is quite ballsy. In fact, since I am by no means a fish a chips conessuir I don’t even really feel comfortable confirming or denying it. I will say they have a lot of variety in terms of types of fish and batter, but because I am a cheap ass, I went with the cod. A half order was $6 (good lunch size) and I splurged for the $1.25 to get it chili fried. It was good, not greasy, and the french fries, while basic, we’re quite good.

But on the vegetarian side of the table, things weren’t as positive. I mean, it’s not a huge surprise that a fish restaurant wouldn’t cater to the veggie diet, but this is Portland! Jared ordered a veggie burger, which was available in either regular or spicy. He got the regular one, which was doused in mayonnaise and didn’t come with anything other than a pickle. This prompted a potentially overboard order of the Packer Fries, which cost more than the burger itself. The order was huge, but basically was just fries covered in partially melted cheddar and sliced jalapenos, and way over priced at $7.25.

Hawthorne Fish House is a little over priced in general, but I should note we potentially blew it on the lunch special. Even though it was clearly advertised outside and on stand-ups on the tables, we didn’t really notice it until after ordering. There were several options for $5.95 that included a drink and basically, I could have gotten what I ordered for $5.95 (except not chili fried) instead of around 9 bucks, and it would have come with coleslaw too. Come to think of it, it would have been nice for the waiter to point that out.

Veggie options: Limited, and kind of overpriced, but plenty of gluten free