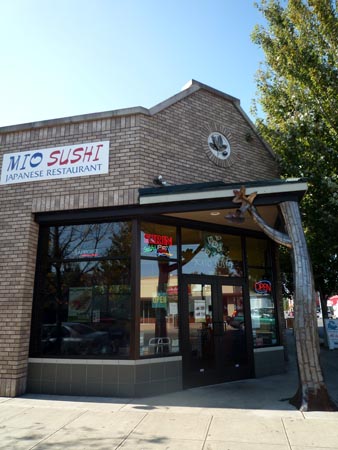 Sometimes at the end of a long, hard week, you just have to treat yourself to a really bitchin’ lunch. For me, sushi is the ultimate extravagance because I am 100% incapable of doing anything less than completely over ordering. In fact the only real difference between sushi lunch and such dinner is I am much less likely to opt for a saki bomb mid day, so I guess that makes it a bit more affordable.

Mio has been a favorite sushi place in Portland for awhile now, and actually has several locations around the metro area. One of the major appeals of Mio is the dining rooms are decent sized, so even during the dinner rush, you can usually get seated quickly. This is not to say it’s not a busy place, and on our visit the dining room was nearly full and the servers were buzzing around and multi tasking like crazy.

Though we were no offered any specific lunch menu, there are several affordable bento boxes on the menu which would probably be perfect for lunch. However, as I’ve already mentioned, I don’t go small when it comes to sushi, so we ordered cucumber salad, miso soup and two rolls each. Another thing I love about Mio is the number and variety of rolls they offer. I always go with at least one “crispy” roll, rolled and then tempura battered and fried, this time it was the Crunch Roll, with spicy tuna with avocado. The best part is the sweet sauce drizzled over top of it. I also got a yellow tail roll with avacado. The fish is always fresh and “spicy” isn’t too spicy, which I like. As for the vegetarian, there are several veggie rolls with more variety than many places which simply offer the standard cucumber, avocado choices. Today he got the Super Vegi roll and the Sweet Vegi roll and both were delicious as expected.

Since it’s a chain, Mio definitely has a bit of chain feel, with weird little drink and dessert cards on the table, and if it’s an authentic Japanese experience you are after, it’s not it. But if delicious and realatively affordable sushi is what you want, Mio certainly delivers.

Veggie options: Better than most