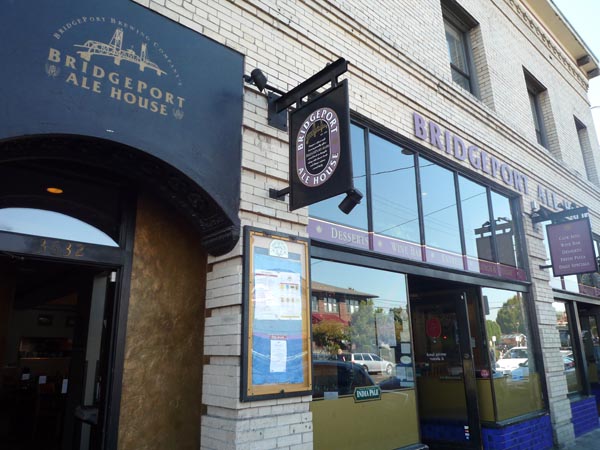 If this was a Happy Hour blog, I’d probably give Bridgeport Ale House an A- overall, but this is a lunch blog, and as lunch goes, it was a C, tops. The Hawthorne location, Bridgeport Ale House, is not to be confused with Bridgeport Brew Pub on NW Marshall, where I have also eaten on a previous occasion. The Ale House is an overall much smaller location, with a smaller menu selection. There is no bakery on the premises, just your basic upscale pub atmosphere.

On my visit to the west side location I tried the French Dip, because roast beef with horse radish is just about my favorite thing. At that point I was very happy with my selection and nearly ordered it again, but decided to mix it up a bit and went with the Ale House Burger. It came with a choice of cheese (I picked cheddar) and a side (I had chips.) I’ve been on a macaroni salad kick as of late and I almost ordered it, but our server straight up said it wasn’t very good, so I took her word for it. Jared got the Mac and Cheese, mostly on the server’s recommendation, although her saying it tasted like bacon nearly scared his non-meat eating self away. She went on to explain it was just the smoked cheddar they used that gave it a similar flavor.

The food arrived and the portions were certainly generous, but again, this is a lunch blog and despite my affinity for food I am a fan of reasonable lunch-sized portions. The Ale House has only one menu for all times other than happy hour, so dinner time may be a more appropriate time to go. I also should have known better than to order a burger. You see every burger I will ever eat gets compared to the holy grail of hamburgers, the Slo Burger. While not actually on Hawthorne, Slo Bar has the best burger I have eaten ever, and for the same price as the Ale House Burger. The burger here was big, juicy and cooked well, but was overall pretty damn boring. Honestly the only thing I got excited about was how thin the red onions served of the side were sliced. The Mac and Cheese was a bit better. Crumbled kettle chips on top gave it a nice crunch and it did have a smokey flavor. The side salad it came with however, was mediocre at best, due to bland ranch dressing (seriously, how do you screw up ranch dressing?)

Obviously I look at the prices on the menu so it wasn’t a shock when the bill came to $22, but for lunch it’s a bit excessive. That said, at Happy Hour (from 3-6), our same exact meal would have been $6 less, plus we could have gotten cheap beers! While we’re on the subject of beer, they have a bunch, but I usually save lunch beers for Fridays or the days I just don’t feel like working, which wasn’t today. Had I been drinking, my whole experience would have likely been different (a even more expensive.)