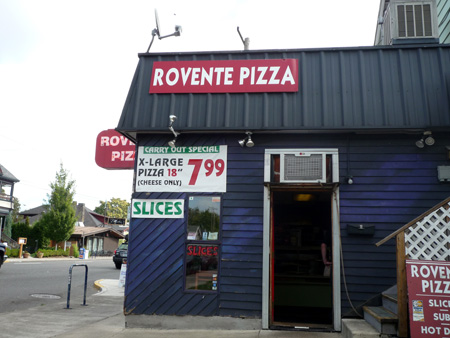 West coast pizza places tend to have one thing in common: shitty pizza. So either Rovente is an exception, or I have been here too long, because I was pleasantly surprised with the offerings at this hole-in-the-wall pizza joint.

Rovente apparently as two locations in Portland. The one on Hawthorne is tiny, with only a few indoor bar seats to speak of. Most of the dining room is taken up by a huge glass case displaying the day’s pizza selections. Luckily, the day we hit up Rovente it was nice out, and we were able to take advantage of the few picnic tables that make up an outdoor seating area. Should the weather be more “classic Portland,” this place would be strictly take out.

So as I already mentioned, I liked the pizza. The crust was thin and crispy and it wasn’t too greasy, but what overall set it apart were the toppings. I got a “meat” slice with sausage, olives, pepperoni, onions and peppers, as well as a garlic chicken slice with a white sauce. The sausage chunks were big and flavorful, not like that ground up crap you sometimes find. My vegetarian compatriot was not as bowled over by his slices, a cheese and a veggie, which is why I credit the toppings for my enjoyment.

I asked and the cook if selections change from day to day, and he basically said it was depending on the cook. On the day we were there, the line up was pretty standard pizza toppings, but like I said, both slices I tried were good.

Veggie options: Yes, a couple, but not as glorious as for us meat eaters. 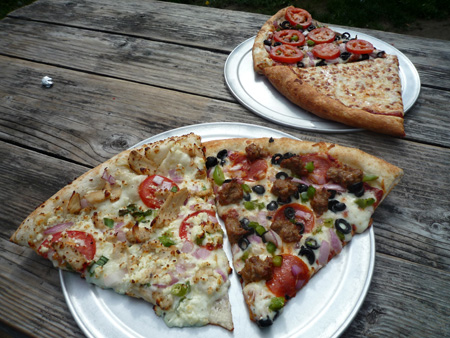