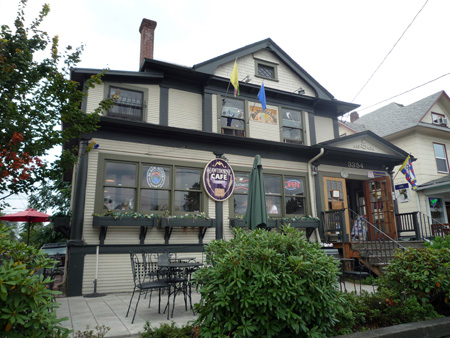 The Hawthorne Street Cafe is a oddly named place, with Hawthorne being a boulevard and all, but that’s not the only thing unique about it. It’s situated in an old, misplaced farm house on the corner of 33rd Ave, and from the outside, seems more on the upscale end of the spectrum. But immediately upon walking in, I felt like I’d ended up back in Vermont, in a country cafe complete with red checkered table clothes and a sloping porch where we were seated.

The menu is standard breakfast and lunch fare, with breakfast served all day. Of course, this creates the lunch or breakfast dilemma, in which I opted for lunch and Jared for breakfast. For breakfast you had all the basics: pancakes, omelets, scrambles, etc, with the one notable item, crepes with season fruit that changes depending on the day. Lunchwise it was salads, sandwiches and burgers, and the lunch items were actually a bit cheaper overall than breakfast it seemed. The sandwich choices included some all veggie selections and then turkey, chicken and other meats. The one oddity was a gyro, which could most logically be explained by the super friendly Middle Eastern man who greeted us graciously when we entered. Since he thanked us profusely for coming, I’m going to venture he was the owner.

I got a turkey and avocado sandwich with pasta salad, made with fresh cooked turkey. It was all very good, but not anything I couldn’t have easily made at home (in fact, I think I have for the week after Thanksgiving every year.) Jared got a tofu scramble (hold the egg) with potatoes and toast. They brought out at least 5 kinds of hot sauce for him, since apparently they are aware tofu has no flavor. His review, it was good, it was food. And overall, the offerings at Hawthorne Street Cafe were just that, food. It would be a good place to take visiting family members, and the service was excellent, but it wasn’t anything that exciting or special. And I am happy to report, that slanted porch did not fall off while we were sitting on it.

Speed: The second I put down my fork the check was on the table.