Posted by admin in General 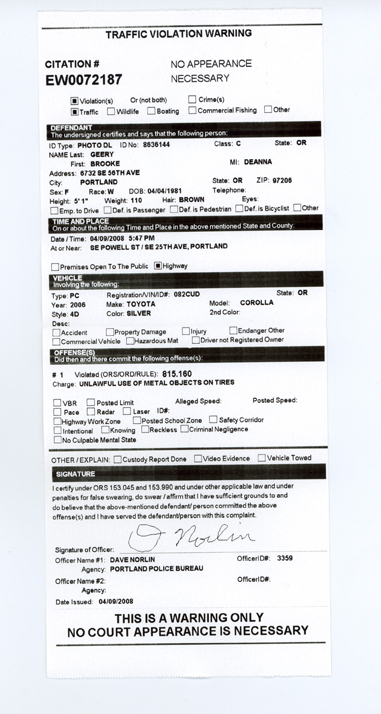 I think it’s official this time. Today it’s well over sixty degrees and sunny, and I finally got my studded tires removed. Actually, funny story. Since this was my first time having studded tires (and I have been called a pussy and informed I should “jet get all season tires”) I am not that well versed on the protocol. After my first treacherous drive to the mountain with them though, I was glad I dropped the money to get them. I even wrote a blog about that.

But now it’s April, and Portland has some silly law that you have to remove them by a certain date. That date, as it turns out, was April 5th. Now on April 5th  I was actually using my studs, driving up the mountain for Vegetate. So obviously I didn’t get them taken off. I had really good intentions to do it that Monday, but you know, I managed to forget.

I went a whole three days before getting pulled over for still having on my studs. Now as I was getting pulled over I really had no clue why. I’d grown very accustomed to the noise, and well, it seems the cops would have better things to do in Southeast Portland, like busting drunk drivers and breaking up meth houses. But no, he wanted to tell me that I was supposed to get my studs off THREE DAYS AGO! Everyone I mentioned it too said it that way, like three days was a really long time. Maybe it’s just cause I am getting older, but three days doesn’t even seem like enough time to do anything, so seriously, why the guilt trip?

Anyway, the cop let me go with a warning and I got the tires taken off the next day. My car is so much quieter now and hopefully I will get more miles out of my $4 a gallon gas. If nothing else, maybe I can get a tan cause it’s finally nice out.