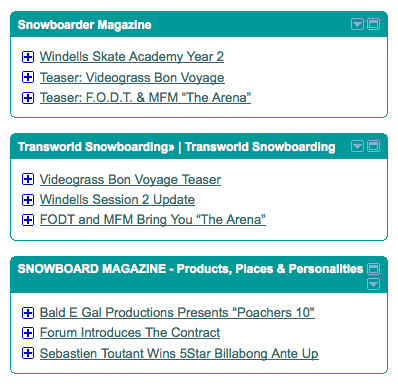 I used to not check any of the “major” snowboard sites. Frankly I didn’t care or even want to know what they posted. For me, the only thing that mattered is that I was happy with what I was posting on YoBeat. But once I started selling ads, it became pretty apparent, those other sites were competition, and I’d better know what they were doing if I was going to convince people to give us money rather than them. So I set up a Google reader and started paying attention. More often than not, the other feeds looked similar to, if not exactly the same as, each other (of course this method of tracking is faulty because it doesn’t differentiate between site sections, and half the time is hours behind). Not to say I was never guilty– I’d often post some of the same stuff, mostly press releases and teasers. (This is also a necessary evil if you want to keep advertisers happy.) I should have known it was a slippery slope.

It’s hard to keep a website going and updated every day. As a lone person, or even with a few people, coming up with brilliant, original content on a regular basis can only last so long. And the web makes it really easy to get lazy, especially with the sheer amount of videos and brand-created content, uploaded every day, just there for the embedding. Why spend money and time creating new content, when you can just take what’s already there?

So here’s what happens. Eventually it stops being about having “good” content and just about keeping the site updated. Content=traffic, right? I’d find myself posting things (such as the infinite number of teasers,) without even watching them. And this morning (an especially teaser-heavy one) I realized my site looked just like all the others. Same embedded video. Same copy and paste description. Why bother?

I ended up breaking my own rule and took down a couple of those posts. I replaced them with this. It’s still the same teasers, but what’s this? It has an angle. It’s a little different. It’s a reason for someone to come to YoBeat instead of the others. And it makes me feel better, at least.

In writing this I realized I don’t know what I am trying to say. I’m definitely not trying to give anyone advice on how to make a good website! In fact, the more time I spend updating the Internet, the less I feel like I know whats good, bad or even interesting. I think mostly I just need to put this out there for myself as a reminder: if you’re not gonna try, you might as well not bother.